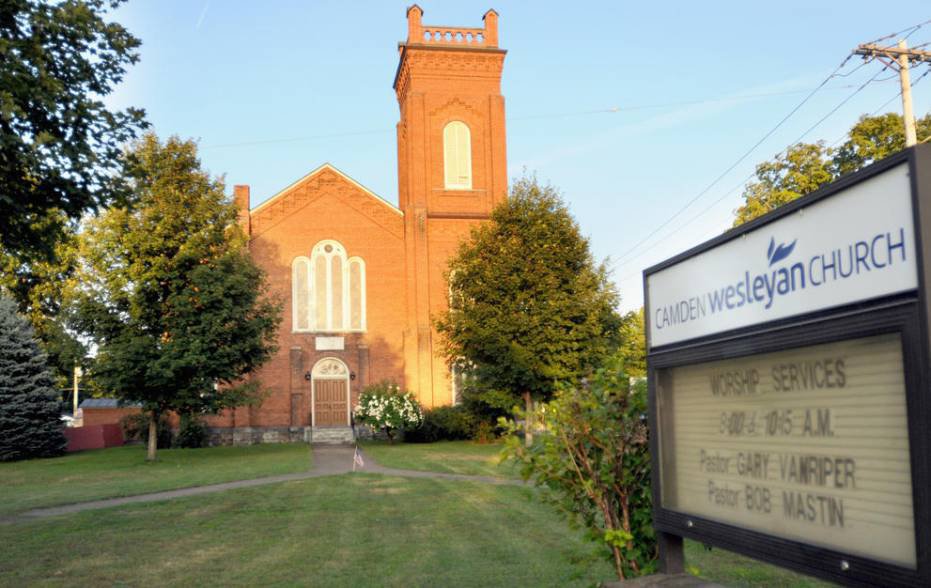 A historic Wesleyan church in New York is moving to another building in town and reminiscing about the church's rich history.

A dedication service will be held on Sunday at 4 p.m. to mark the congregation of the Camden Wesleyan Church in Camden, N.Y., moving from 11 Church St. to 101 Main St., the former location of the United Church of Camden (Presbyterian).

“This is an historic change in the spiritual landscape here in the Village of Camden,” said Rev. Gary VanRiper, Camden Wesleyan Church pastor.

“The United Church actually donated not only the Church and the block it sits on at 101 Main Street, but also what is known as the Camden Village Park, which many do not know is actually owned by the church and is leased to the Village of Camden.”

“When I heard in late 2013 that the United Church was going to close, I called the Rev. Leonard Everman and encouraged him to consider donating the church property leased by the Village of Camden to another church in town,” VanRiper said, adding that he wanted to ensure continuation of religious functions at the village park including Gospel concerts on the Green and the annual Nativity scene. He said Everman offered to sell him the church for $1.00.

“While we had been at two services in our small church for quite some time with no room to grow, that was not the motive for my call.” VanRiper said. “But his offer did initiate dialogue between our two denominations and (in) February of 2015, we did officially take ownership of both the church and the block it sits on at 101 Main St. in the Village of Camden, and the center block currently leased by the Village of Camden known for years due the generosity of God’s people here as The Village Park.”

According to VanRiper, the Camden Wesleyan Church was first established in 1842, following the withdrawal of some 16 members of the former Camden Methodist Episcopal Church over the issue of slavery.

“The Wesleyan Methodist Abolitionist Church was soon built, but disbanded in 1864 when so many of its male members fell during the Civil War. A Free Methodist Church for a number of years, the building was acquired once again by The Wesleyan Church and services began anew in 1965 through Aug. 2, 2015.” Services started in the new building on Aug. 9.

Special guests at the ceremony Sunday include Central New York District Superintendent Dr. Matt Pickering and Julie Rosati from CareNet. She is the director of Client Services and Community Outreach for the ministry.

“CareNet will be establishing a satellite office at the church,” he said. Other organizations also using the site include WIC, AA, and the Girl Scouts. “A senior lunch program runs every Wednesday at noon from March to December and serves some 35-50 seniors every week.” The Cornerstone Youth Ministry runs an after school program every Monday, Wednesday and Friday from 2:30 to 5 p.m. at the church. A hot meal is served on Wednesdays during the school year.

While there are no immediate plans for the building at 11 Church St., the church will be selling a house at 24 Third St., which had previously been used for youth ministry programs.