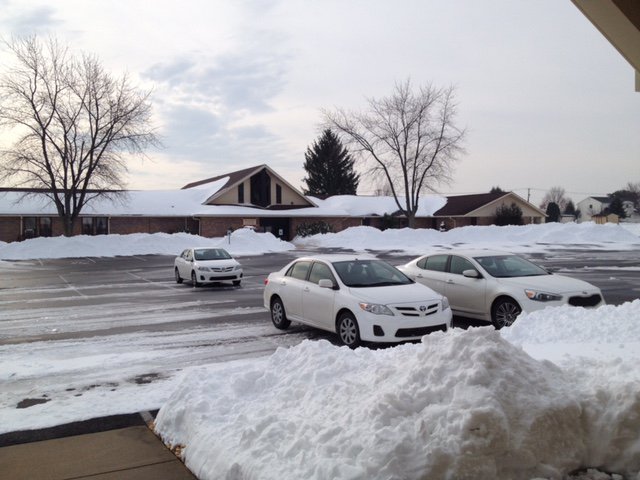 Wesleyan churches minister in the midst of East Coast snowstorm

When the East Coast was slammed with a blizzard, various Penn-Jersey churches had to cancel services. Many people took advantage of the snow as a way to minister to their neighbors.

The winter blizzard with record snowfalls hit five of our districts hard: Shenandoah, Chesapeake, Kentucky-Tennessee, Western Pennsylvania, and Penn-Jersey. The following anecdotes are from Penn-Jersey and are examples of how our churches use these as opportunities for ministry.

While several churches in the district were forced to cancel services, many tried to make the most of the dire weather situation, such as Trinity Wesleyan Church (pictured) in Allentown, Pa.

Rev. Gina Colburn and her congregation began thinking early in the week how they could minister to the community should the predicted blizzard hit the area. They anticipated having to close church that day, so made an action plan to set up an online church experience. Worship team practice was recorded ahead of time, and on Saturday Rev. Colburn recorded the sermon at home. When services were officially canceled, a video announcement was distributed letting people know to tune into the online service Sunday. She said, “We had a huge response and lots of interaction.”

Church members also helped people like providing electric heaters to neighbors or baking cookies and coffee to those who plowed snow. Two snow plow workers were invited to church and said they would attend the following Sunday.

Another gentleman needed help unclogging a blocked vent on his roof. A Trinity member helped fix the problem for this man, as well as another neighbor, and invited both to church. Many others reported assisting their neighbors and inviting them to church.

“We can’t wait to see how God continues to use the 2016 blizzard for his glory,” said Rev. Coburn.

Several other churches offered online services, helped neighbors dig out of the snow, and took food to those in need. Other churches opened their doors to house those who needed shelter. Pine Grove Wesleyan Church in Pine Grove, Pa., determined the primary need for the community was “rescue” rather than providing a service.

“Our plow was better served getting people out of their homes and off the roads than it was clearing our church parking lot,” said Rev. Kenneth Smith, pastor at Pine Grove Wesleyan. “A handful of our members dug people out in the community with plows and excavation equipment. Others lent blowers, shovels, and backs to operate them. Fortunately, people in the community were well prepared in terms of supplies and heat.”