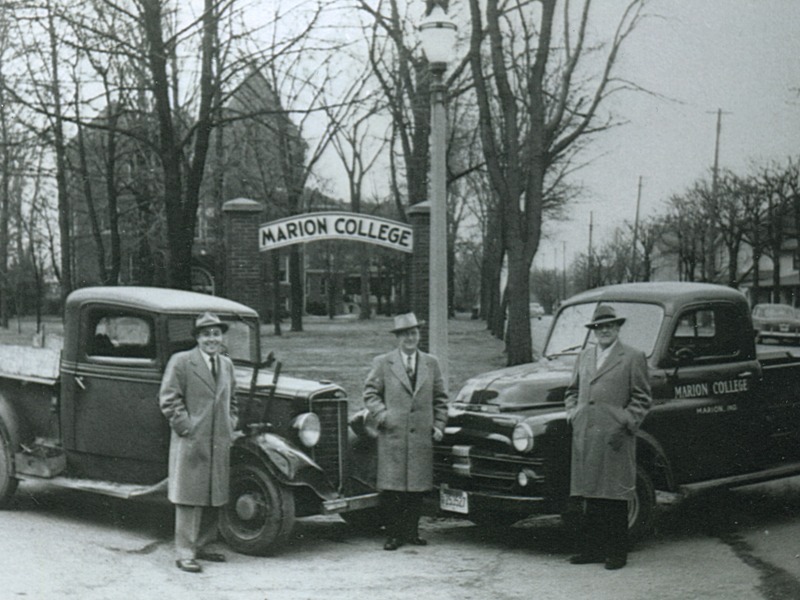 The creation of Marion College (now Indiana Wesleyan University) was driven by a desire to establish a college in Indiana to serve the heartland of a growing denomination.

A vision that began to evolve 100 years ago as Marion College laid a firm foundation for what would become Indiana Wesleyan University.

Marion College had humble beginnings. When the Indiana Conference of The Wesleyan Methodist Church agreed in 1919 to purchase Marion Normal Institute, it was driven by a desire to establish a college in Indiana to serve the heartland of the growing denomination.

Beginning in 1918, a canvass of the Indiana Conference brought pledges of $100,000 for endowment, and the property was purchased in 1919.

“The central location of the Marion campus, and the fact it was located in a small city rather than a village, caused a migration to begin toward Marion even before the college opened,” Lee M. Haines and Paul William Thomas wrote in An Outline History of The Wesleyan Church. There were 25 Wesleyan Methodist churches within a 30-mile radius of the campus, and the Indiana Conference offices were in nearby Fairmount.

Marion College opened in the fall of 1920 with an enrollment of 235 students, and there were five graduates in the class of 1920-21. Trustees were not prepared for the financial demands of operating a four-year liberal arts college, however. The financial crisis was intensified by controversies, which caused the removal of the first two presidents. It was not until 1931 that a season of stability and maturity began with the arrival of William F. McConn as president.

The original campus consisted of an administration building and a women’s dormitory.  An additional nine acres were acquired and eventually became the site of a gymnasium, a church and a library. Under the McConn administration, from 1932 to 1960, the college came to fulfill an important role in Christian higher education.  Marion College was accredited in 1966.

In 1985, the college began an adult education program in cooperation with the University of Phoenix, whose mission was to meet the changing educational needs of the American workplace. Regrettably, Marion College struggled financially before it could take full advantage of the new program.

In June 1987, Dr. James Barnes became president of an institution that was on the brink of bankruptcy. His first challenge was to put Marion College on a solid financial footing. As part of that plan, Marion College changed its name to Indiana Wesleyan University (IWU) on July 1, 1988.

In 2009, under the leadership of President Henry Smith, IWU launched the first seminary officially affiliated with The Wesleyan Church, Wesley Seminary.

Almost a century after its founding, IWU has become the largest member of the Council for Christian Colleges and Universities and the largest private college in Indiana based on enrollment.

Nearly 3,000 students are enrolled in traditional programs on the University’s 350-acre campus in Marion and students represent more than 80 Christian denominations and 10 foreign countries. The University has received national attention for its innovative adult education programs, which now have more than 10,000 students.

Pictured: The three top administrators of Marion College —Field Representative Howard Noggle, Business Manager Russell Baldwin and President William F. McConn — celebrate the doubling of the college’s truck fleet from one to two pickups in this photo taken in 1952.