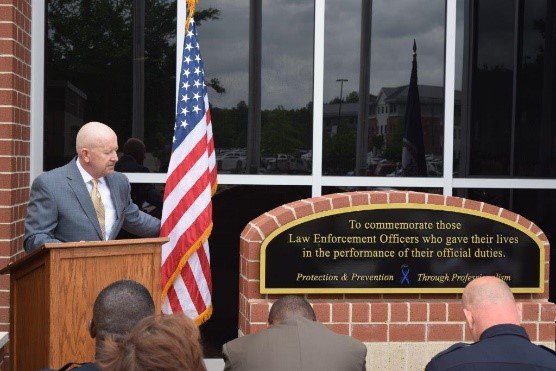 Wesleyan pastor, Rev. Sam Frye, has been recognized for his role in impacting the lives of police officers as both a cop and chaplain.

What do a pastor, chaplain, and police officer have in common? They all focus on impacting lives, one person at a time. For church planter and First Simple Church founding pastor, Dr. Sam Frye, all three roles were recognized at this year’s James City County, Va., police awards ceremony.

Awarded the distinguished Chief’s Award, Pastor Frye was recognized for his role in impacting the lives of police officers as both a cop and chaplain. Rev. Frye received the third highest police department award behind the Medal of Valor and Purple Heart. This pastor not only patrols the streets as ministry allows, but also serves as both a police department crisis negotiator and chaplain. He also serves with the Peninsula Regional Crisis Intervention Stress Management team.

Police Chief Bradley Rinehimer recognized Rev. Frye’s vision and leadership for constructing a police memorial wall for law enforcement and, specifically, for a local officer shot in the line of duty nearly 40 years ago. He led fundraising, design, approval, and construction efforts. This culminated in a memorial dedication ceremony in May attended by county officials and the officer’s family members.

Rev. Frye was also recognized for his involvement in Law Enforcement United (LEU) where he is the Virginia Division chaplain. LEU brings awareness to officers killed in the line of duty by riding bicycles from Chesapeake, Va., to Washington, D.C., annually during police week. In his eleventh year supporting this outreach, Rev. Frye has peddled over 5,000 miles. To date, LEU has raised over $4 million, funds used primarily for counseling and ministering to children of police officers killed in the line of duty.

Rev. Frye’s love for Christ and heart for outreach is evident in LEU, a secular organization, as he ministers to and prays with police officers and survivors. Peddling the many miles, shoulder-to-shoulder with his fellow officers, presents opportunities to communicate the gospel. Salvations, baptisms, and spontaneous prayer are not uncommon along the route. During the 2017 ride, he was involved in a crash. As medics tended to Rev. Frye, hundreds of riders gathered around. He heard one officer shout, “He’s always praying for us, now let’s pray for him.” Officers surrounded Rev. Frye, laid hands on him, and followed his example.

First Simple Church is a five-year Wesleyan church plant with a three-fold mission for local outreach: first responders, military, and motorcycle enthusiasts. It is a church plant sent by Christ Community Church, also located in Williamsburg. Christ Community pastor, Rev. Randy Garner, who started the department chaplaincy program over 15 years ago, also serves as one of the chaplains. 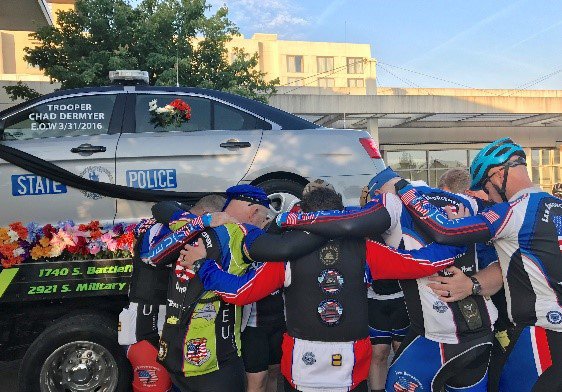