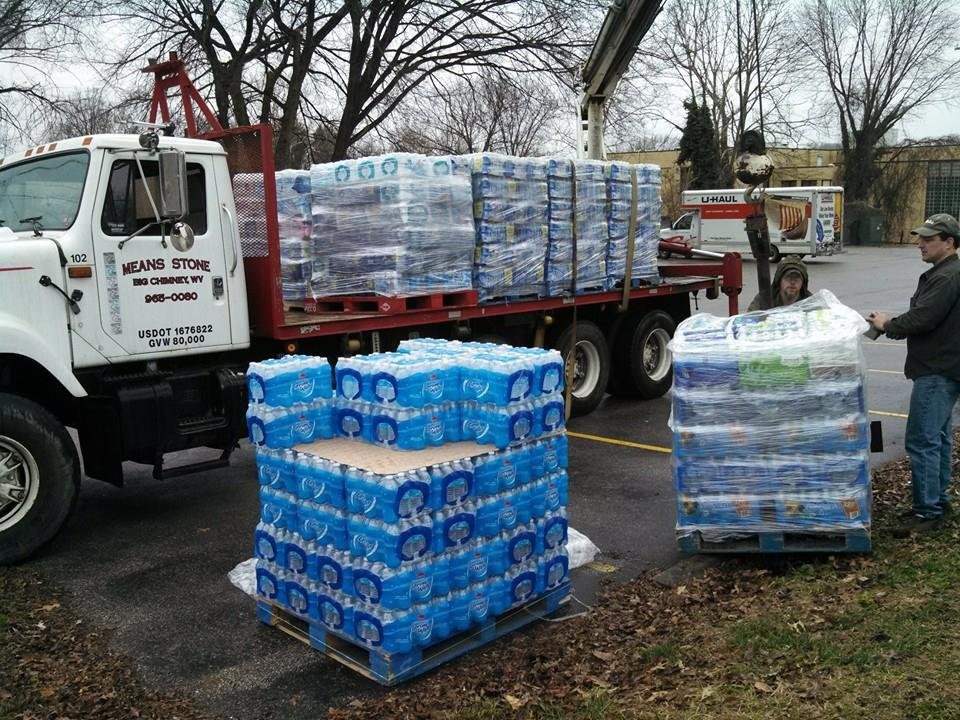 West Virginia crisis: a cup of cold water means more than you think

An incredible show of support from Wesleyan churches in an eight state area combined to reach out in compassion. In the distraught area of 1/3 million people, the poor were the most vulnerable.

On Thursday evening, January 9, Governor Earl Ray Tomblin publicly announced that the licorice smell in the tap water locally came from the coal-cleaning chemical mixture, crude MCHM. It was leaking from a storage facility into the Elk River upstream of the water intake that supplies residents of nine West Virginia counties. The large amount of MCHM had overwhelmed the water treatment facility and contaminated the entire system. West Virginia American Water Company placed all 300,000 customers under a do-not-use water warning. The contaminated water posed a hazard to human health if used in cooking, bathing, brushing teeth, and even cleaning and washing clothes. The only residential use deemed safe was flushing commodes. We entered a state of emergency.

Within minutes of the public declaration there was a rush to the stores and the shelves were stripped of bottled water. Alarm turned into panic and looting. By the eleven o’clock news, schools, daycares, hotels, restaurants, and most businesses had closed their doors indefinitely. Medical procedures were cancelled at area hospitals. Nine counties virtually came to a halt. No water was available.

Friday morning, the five Wesleyan churches in the do-not-use zone mobilized to serve literally a cup of cold water in Jesus’ name. We contacted Shenandoah District Superintendent Rev. Greg Reynolds and he relayed the urgency of this crisis to sister churches in West Virginia and Virginia, who have since then stepped forward in a big way. Word reached Wesleyan headquarters and Rev. Wayne MacBeth mobilized the information channels even more widely, especially to Wesleyans in the states surrounding West Virginia.

The five Wesleyan churches in the affected area began to locate safe water sources, containers, and drivers to transport it to our communities in need. The poorest and most vulnerable were the least able to get safe water. Each local Wesleyan church reached out through our established networks of fellowship to get water into the homes of the elderly, the ill, and those with babies and young children. We carried it in bottles, large and small, and buckets. The need was overwhelmingly for our limited ability to respond at first. But then more water began arriving from Wesleyans and others in Virginia and the other surrounding states.

Saturday morning cars and trucks filled with water and supplies began to come. Faith Community [Wesleyan] Church in Charleston served as a hub for the distribution effort due to easy access from Interstate 64. From there water moved to Elkview through Three Mile Wesleyan and to Boone County through Nellis Wesleyan. Grace Wesleyan in Culloden, W.Va., coordinating with the Kentucky-Tennessee District, brought 30,000 bottles of water to the western portion of the do-not-use zone. Three Mile Wesleyan Church distributed an additional semi truck load of relief in cooperation with 2 Million Bikers to DC and Truckers of America.

Robert Lee, a local man, stopped by needing water. He seemed moved when given water, paper plates, and plastic ware, and asked why we were doing it. Those serving said, “Because Jesus loves you, Robert Lee, and so do we.” He claimed to be undeserving of such love. Tears welled up in his eyes as we insisted the provisions were God’s act of concern for him.

Pastors and churches from Pennsylvania, Maryland, Virginia, West Virginia, Ohio, and North Carolina contacted us to see how they might provide assistance. [See full list at the end of the article.] Many delivered supplies to the crisis zone, while others shared the reality of our plight with their congregations and took a special offering. The Body of Christ reached out to its hurting members.

People needed paper products since the water was unsafe to use for cleaning or cooking. We also needed bleach and baby wipes. The most vulnerable people needed food supplies that could be prepared with little or no water. We asked for larger containers to speed the delivery system with which our relief effort started. If we had the larger containers, they could be filled from water supplies in other water districts that were not affected. We received tons and tons of bottled water on scores of pallets. Our out-of-state partners sent them all!

The first Sunday afternoon Joe and Jim arrived in Charleston from Harpers Ferry, W. Va. These tireless brothers filled 200 five-gallon buckets and distributed them to those standing in line with them at filling stations, up and down streets to neighbors where church members live, to addresses of shut-ins, and finally to the local men’s homeless shelter around midnight before travelling back home to begin collecting even more supplies.

We partnered with local schools and sister churches of various denominational stripes to get supplies out to the needy. We were at times overwhelmed as semi truck loads of water and materials arrived. Our local Wesleyan members worked tirelessly day and night, offloading, sorting, packaging, and sharing – all with the knowledge that they too were victims of the crisis with no shower waiting at the end of the long day. A typical day saw 20 pallets of water distributed and 500 bags and boxes of supplies. Sometimes the line of people coming for help from us was several blocks long.

Yvette, a single mother with five children, could not work because the school where she worked was closed. No work meant no pay. The public housing authority distributed water over five miles away, but with only public transportation to her, the logistics were not possible. Sunday, with tears in her eyes, she testified that without the church bringing water, food, and supplies every other day her family would not be surviving.

The most vulnerable among us are our children and young mothers who live on the west side of Charleston. We are making water deliveries there every day. Your financial support is a “cup of cold water to . . . these little ones” (Matthew 10:42).

Official governmental help from FEMA arrived late and left early. On Friday, January 17, officials declared the water safe (one part per million). But right away the Center for Disease Control (CDC) released a statement warning pregnant women not to use water until totally chemical-free and the American Association of Pediatricians issued the same warning for small children. The U. S. Agency for Toxic Substance and Disease Register recommended that residents flush their systems until their water no longer contains the tell-tale licorice smell. Days later, the smell remains and so does the crisis.

We are humbled and honored by our brothers and sisters who have sent donations of all kinds to assist during this on-going water crisis. They have been and continue to be choice servants of the Lord. In addition to offering compassionate help, we are offering the gospel. I personally know of four community people who have found the Lord through this crisis ministry, and there are no doubt others. God bless all those who have helped and also the many who have prayed.

The following churches have brought or sent supplies:

See the original crisis announcement, the call for assistance, and contact information here!