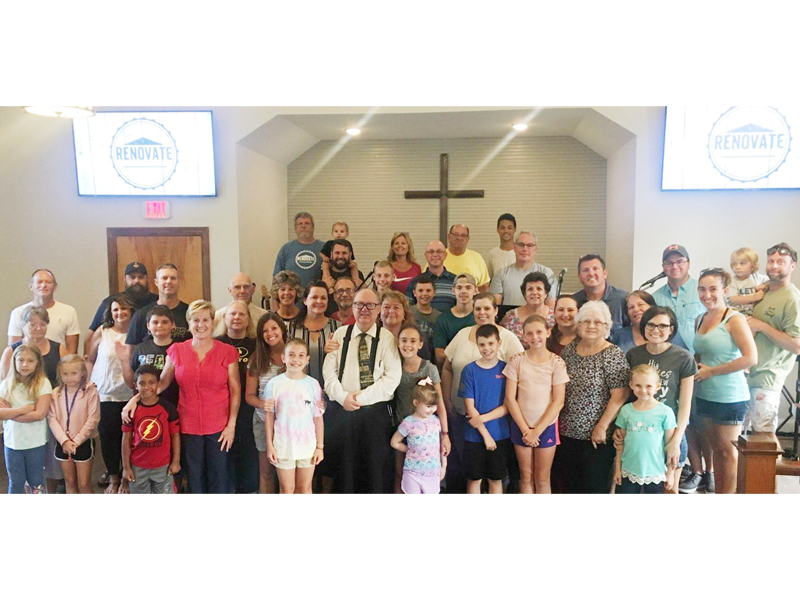 One man's impairment would have prevented many churches from ministering to him. But God had other plans when he sent Duane to Renovate.

As another Sunday morning service began, I stood at the front to welcome the congregants to Renovate Church in Delmar, Maryland.

I could see an elderly gentleman enter the doors of the small sanctuary, and immediately his eyes locked on the two large screens that hang on either side of the platform. I saw the puzzled look on his face and assumed I would be fielding the complaints of yet another person who did not approve of the upgrades we had made to the 90-year-old church building we had moved into just a year earlier.

I let the thought pass so that I could focus on leading this fresh, vibrant congregation to worship. I figured I would have a conversation with him after service. But I saw the puzzled look on his face became more animated as he looked at the computer screen at the back of the church, then back at the screens, then back at the computer. It dawned on him that the words and pictures being manipulated at the computer were the same words being displayed on the screens. He slipped into the back row and watched with amazement. About two songs into the worship set he raised his hands and began using his hands to sign the words on the screens. His face lit up as he began to worship through sign language.

My assumptions about this gentleman couldn’t have been more wrong. He was not a disgruntled church attender. He was deaf and seeing the words on the screen enabled his hands to be free to worship along with the rest of the congregation.

I greeted Duane after service and tried to pull up every bit of universal sign language that I could recall — a smile, a wave, a big thumbs up. I tried to finger spell my name so he felt welcomed. I was grateful that he wasn’t disgruntled, but I felt sad that we likely wouldn’t be able to communicate with him very well. Our tiny, small town church was just over a year old and our resources were thin. In that first year we had been able to minister to all kinds of people —homeless, addicts, incarcerated, mentally ill, etc. But how would we effectively minister to a deaf man?

As Duane left the church that morning, I turned to some to share my concerns. Pastor Brent, one of our assistant pastors, stood nearby and heard my lament. I can always count on Pastor Brent for a positive spin on things, and he blurted out, “Yeah, I know sign language.” I cut my eyes at him. I was in a serious mood, and this was not the time to joke around. “Yeah, right, Brent. Thanks for the input,” I said.

“No, really,” he said. “I know sign language.” I’ve known Brent for ten years — how was I not aware that a job as a supervisor at a ship building company years ago required him to know sign language? It became immediately evident that God had this all figured out.

The next Sunday, Duane came back to church. This time he sat on the second row. As soon as the words appeared on the screen, he began signing. Now that he was sitting near the front, the congregation could see how he worshiped, and this time they were amazed. Tears began to flow as they witnessed his love for Jesus flowing through his hand motions. Just watching him worship became an inspiration for others to express themselves in fresh ways.

Duane soon began to minister at our weekly meals that we serve to the community. He began participating in our community Bible studies, and we became aware of his intense love for God’s Word. He often encourages us, “Read! Read! Read!” Watching the relationships between Duane and Pastor Brent develop and seeing them communicate with one another has inspired our congregation to learn sign language. We now incorporate some aspect of sign language in most of our services.

What began as a wrong assumption has actually been one of the most amazing blessings at Renovate Church. As I began watching this emerge, it became evident that the focus wasn’t how the Lord was going to make it possible for us to minister to Duane. No, I believe God’s greater desire was for Duane to minister to us.

In quite an unexpected way, he has become a unifier of our congregation. He is genuinely loved by all and brings so much joy to our fellowship with one another. We have been watching 1 Corinthians 12 come to life in our church as we see that God has arranged the parts of the church body just as he wanted them to be. The parts of the church body that seem to be weaker are actually indispensable.

Renovate is absolutely a better church because of Duane, and we are grateful.