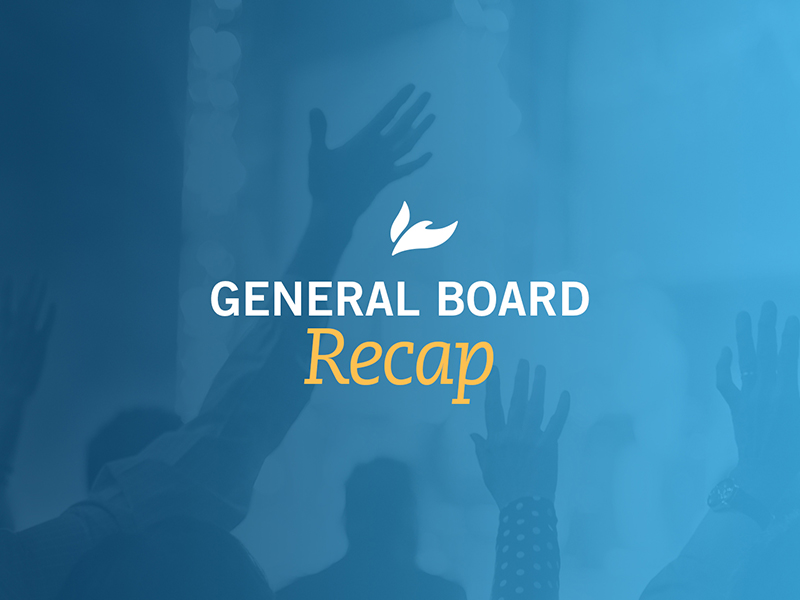 139th session of the General Board convenes

Recap the events of the May 2019 General Board meeting.

Rev. Maria Acuna attended her first meeting of the General Board of The Wesleyan Church as it convened its 139th session on May 7 – 8, 2019, at the denominational headquarters in Fishers, Indiana.

Acuna serves as the pastor of La Gran Comision Wesleyan Church in Columbus, Ohio. Involved with The Wesleyan Church since 1994, she is originally from Colombia, South America. She was ordained in the Greater Ohio District in 2007, the first Hispanic woman ordained in the district. She serves on the Greater Ohio district board of ministerial development and is a mentor to Latino ministerial students. She was elected to the Great Ohio district board of administration in 2017.

She loves to teach and lead lives toward complete restoration. Her passion is expressed through speaking, discipleship and service. La Gran Comision averages 126 people in worship, has 169 members and conducts ministries with children, young people and families.

The General Board elected Rev. Jose Pacheco, campus pastor with Central Wesleyan Church in Holland, Michigan, as a clergy representative on the board for the North Central Area. He will replace Rev. Kyle Ray, who is leaving Kentwood (Michigan) Community Church, to assume the pastorate of Sent Church, a Wesleyan congregation in Plano, Texas, a suburb of Dallas. Discipline guidelines prevent a General Board member from continuing to serve when they move out of their representative area.

In other business, the General Board:

The board heard a report from Dr. Jo Anne Lyon, ambassador of The Wesleyan Church with stories of her involvement in events both in the church and in the culture. The board also participated in discussion groups on several relevant topics from which memorials will be forthcoming at GC20.

The board heard reports from all four of the denomination’s executive directors and chief financial officer, sharing highlights from their respective divisions, including partnerships for greater effectiveness. The board also heard the report of Craig Dunn, CEO of the Wesleyan Pension Fund (WPF), including the announcement of Bob Haymond’s resignation after many years of faithful service with WPF.

Josh Lavender, worship director at Trinity Wesleyan Church in Indianapolis and leader of the Wesleyan Worship Project, led the board in worship. The board heard devotionals on Tuesday and Wednesday from Anne Raga, board member from Gillette, Wyoming, and Rev. Ron McClung, in his last board meeting before transitioning out of his role as assistant general secretary this summer. The board had earlier elected Rev. Anthony (Tony) Casey to be assistant general secretary, beginning August 1, 2019.