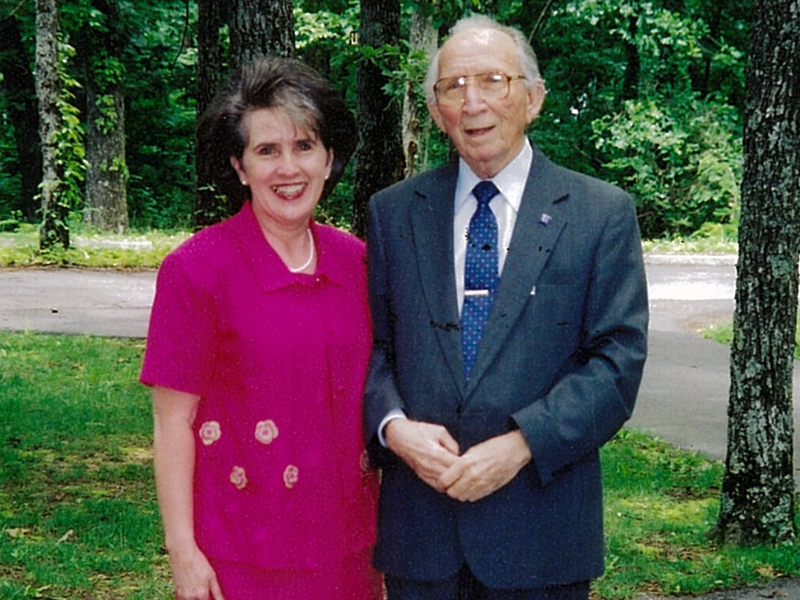 Sometimes it takes a lifetime to truly appreciate all the ways a good dad made all the difference.

Sometimes it takes a lifetime to truly appreciate all the ways a good dad made all the difference.

My father grew up during the Great Depression in a Wesleyan Methodist preacher’s home, having to wear his older sister’s blouse to school and cardboard in his shoes. He changed schools 10 times in three different states. He was drafted and put on the frontline of battle immediately following high school graduation, serving as a rifle company sergeant during World War II in the 80th Infantry Division of General Patton’s Third Army.

He survived four major battles and saw over 80 percent of his comrades fall on fields from the south of France to the Ardennes Forest. Only recently, as I toured a museum in Normandy and afterword stood weeping on the shore of Omaha Beach, did I better understand why my dad didn’t talk about the war and why he would not watch “Saving Private Ryan.” (He used to say, “I was in the real thing!”)

He lived on K-Rations and O’Henry Bars and slept on the ground and in fox holes. Now it makes sense why he refused certain candy bars and loved a comfy bed.

Following the war, he married his childhood sweetheart and raised a family, celebrating 60+ years of marriage. Another phrase he was known for: “Marriage is like silver — you’ve got to keep it polished if you want it to shine.” He never deviated from his priority order of God, family, church and work.

We had a family friend who was a psychologist and worked closely with the juvenile court system. He wrote the forward for a collection of stories I wrote about my dad: “These recollections and anecdotes confirm my feelings that his parenting could serve as a model for what a father is supposed to be about … and that many more James Johnsons in the world are really what society needs to correct most of its ills. ”

Known for his work ethic, integrity, leadership and positive impact, my father humbly received many honors, including a joint resolution by the Alabama Legislature to commend his contribution to rural telephony as he ended his career as a telephone industry CEO.

Though he did not feel called to be a minister, he was an inspirational speaker for churches and civic organizations. He was a true churchman who felt strongly about laity stewarding their abilities and resources to strengthen the church and ministry. He served The Wesleyan Church (TWC) well. He served 50+ years as treasurer and Sunday school teacher in his local congregation and 40+ years as a district treasurer in the South. General Superintendents looked forward to his treasurer’s reports sprinkled with characteristic humor to make a powerful point.

When his district split over a denominational merger, he served as a treasury mediator during that painful division and continued to remain loyal to TWC. He was passionate about the value of higher Christian education and served 28 years as a member of the board of trustees at Southern Wesleyan University (in Central, South Carolina), where he was named Trustee Emeritus and honored as an alumnus of the year. Even at the end of his life, he was chosen as “runner-up Valentine king” in an Alzheimer’s unit because of the surviving remnants of his Southern genteel spirit.

He always made me feel I had touched his heart in a real way. That was still amazingly true on the last Father’s Day I celebrated with him before he went to his heavenly home. At 90, Alzheimer’s had impaired his memory and ability to communicate, so I had written stories about him and included pictures of special times to share with him. As I shared them, I saw a sparkle in his eyes and noted a tear trail down his cheek as his arm moved over my shoulder, giving me a gentle squeeze.

I still miss him keenly at times and would love to talk with him about new challenges in my life. While sheltered in place during this COVID-19 season, I’ve had time to declutter and sort through memorabilia, such as my father’s letters written during the Great Depression and war times. These poignant hours of reminiscing and reflection have been eye-opening and reassuring in the context of 2020. While many people are whining and demanding normalcy and others are traumatized with fear and loss, I realize how my dad’s life example over the years has unconsciously guided my responses to all kinds of situations, including the unexpected and undeserved in life. And now I have a renewed resolve to express gratitude and pay it forward this Father’s Day.

So, I will recognize that while COVID-19 truly is an unprecedented crisis in “my” lifetime, it is not unprecedented for the world or even the U.S. and would not have been for my dad (e.g. WWII, smallpox, polio, etc.). I will reflect on how my dad faced poverty, hunger and change without complaint during the depression. I will resist feeling too guilty for teasing him about all the shirts he bought and never took out of their packaging as a “grown up” depression-era boy because laugher lightened the reason behind it. I will proudly relay to his great-grandchildren how he courageously faced fear, danger, loss, trauma and hardship during WWII to willingly pay a huge price for our freedoms, and how he persevered and demonstrated faith and hope as he doggedly held true to his 80th Division’s motto to “Always Move Forward.” I will ring up a veteran and say thank you in my hero dad’s honor.

I will resolve to not complain about empty shelves at Walmart or limitations on meat purchases, to face fear with faith, and to “move forward” through every challenge with faith and hope in God. I will remember gratefully his selfless, tireless, incomparable work ethic as provider for his family in good times and bad times. I will realize that sometimes it takes a lifetime to truly appreciate all the ways a good dad made all the difference. I will rest more and reduce stress with some humor because laughter is a great medicine. I will renew my commitment to always put God and family first in my life and keep trying to polish the “silver” relationships to make them shine brighter. I will be re-inspired to make the world a better place and to serve others in any way God opens the door for me to do so. I will be re-energized to adapt readily and creatively to help the “church” be whatever it needs to be to see lives transformed and made new.

I will routinely choose two dads at different stages of parenting to authentically affirm and tangibly encourage them in their role of fathering, because as a former school principal I’ve seen the difference fathers can make in children’s lives. I will reach out to especially affirm and pray for those who have chosen to fill the gap of a missing father figure in a child’s life by fostering or adopting, because I want a child to be blessed with a “forever influence” just as I was.

Someone once said, “Anyone can be a father, but it takes a special man to be a daddy.” Perhaps that is why I always called him Daddy. He was my provider, protector, first love, unrivaled hero, mentor and, admittedly, the standard by which I still judge all men. Because of the unconditional love and trust relationship I had with my earthly father, it has been easier for me to trust my heavenly Father. I am thankful for how my father held my hand for a while to guide me and how I will forever sense his influence in my life. More importantly, I am glad he led me to put my hand confidently into an even Bigger Hand that guides me each day.

I still miss my father keenly and wish I could hug him again, but I honor his presence and influence daily. How are you honoring your father? If he is still living, I encourage you to make sure he knows how much you love him. Hug him on behalf of those of us who can’t. If there is need for forgiveness and reconciliation, initiate it before it is too late with God’s grace and redemptive love flowing through you. If you are a father, here’s an enthusiastic high-five to you. Keep up the good work of loving your children well, no matter their age.

Sue Johnson Rickman is a retired public-school principal, member of the General Board of The Wesleyan Church and on the World Hope International Board of Directors. She and her husband, Dr. Claude M. Rickman, reside in Clemson, South Carolina.