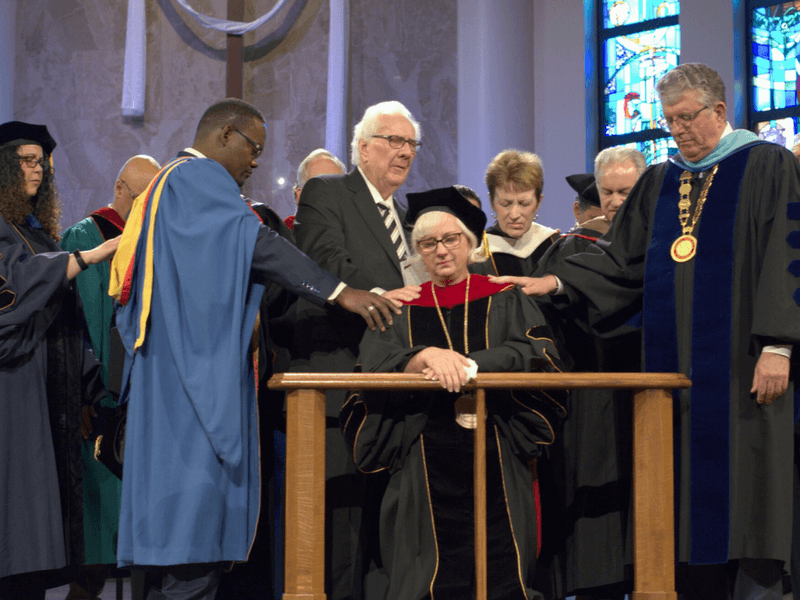 The prayer of consecration held special meaning for Colleen Derr, who was installed as the first president of Wesley Seminary.

Prayers of consecration are always holy moments, but this one was a rare moment indeed, especially for Dr. Colleen Derr.

Wesley Seminary at Indiana Wesleyan University took its first steps into the future under the new leadership of Derr on Wednesday, April 4, where students, leaders, family and friends gathered to celebrate her installation as first president of the seminary. On stage and around the room, faculty and leadership represented the seminary and The Wesleyan Church, including many who were integral to the seminary’s formation in 2009.

Familiar faces stood at the podium, each proclaiming God’s sovereignty, giving thanks for his leading, and reflecting on the years leading up to the installation. This common thread of gratitude led to an important moment at the altar when Derr kneeled before her peers in prayer.

As Dr. Earle L. Wilson (General Superintendent Emeritus of The Wesleyan Church) began the prayer of consecration, the sanctuary of College Wesleyan Church in Marion, Indiana, filled with an almost palpable reverence in recognition of the rare moment. Not only was it the first presidential installation for Wesley Seminary, but it was also the moment when Wilson, Derr’s father, would help install his daughter as the president of the only Wesleyan seminary.

Derr began her presidential response with a tissue in hand and tears in her eyes.

“I am incredibly honored and excited to lead Wesley Seminary into this next phase of life as we seek to fulfill the Lord’s mission for us—preparing Christian leaders to engage missional ministry locally and globally,” she said. “We have an opportunity to build on the foundational work of Wayne Schmidt, Ken Schenck, Russ Gunsalus, Keith Drury and the others who dreamed of and worked to launch Wesley.”

Wesley Seminary’s unique approach to theological education means Derr is charged with raising up men and women who are “focused on Christ as God’s final word to the world,” as Dr. Steve Lennox, president of Kingswood University, said in the homily. Not only that, Derr envisions Wesley Seminary as a place for all people, even students who never saw themselves as “seminarians.”

Derr’s role as president began in July 2017. She has been part of Wesley Seminary since 2011, serving as assistant dean and associate professor. As president, Derr follows Dr. Jo Anne Lyon, who served in the interim after Dr. Wayne Schmidt was elected General Superintendent of the North American General Conference of The Wesleyan Church.