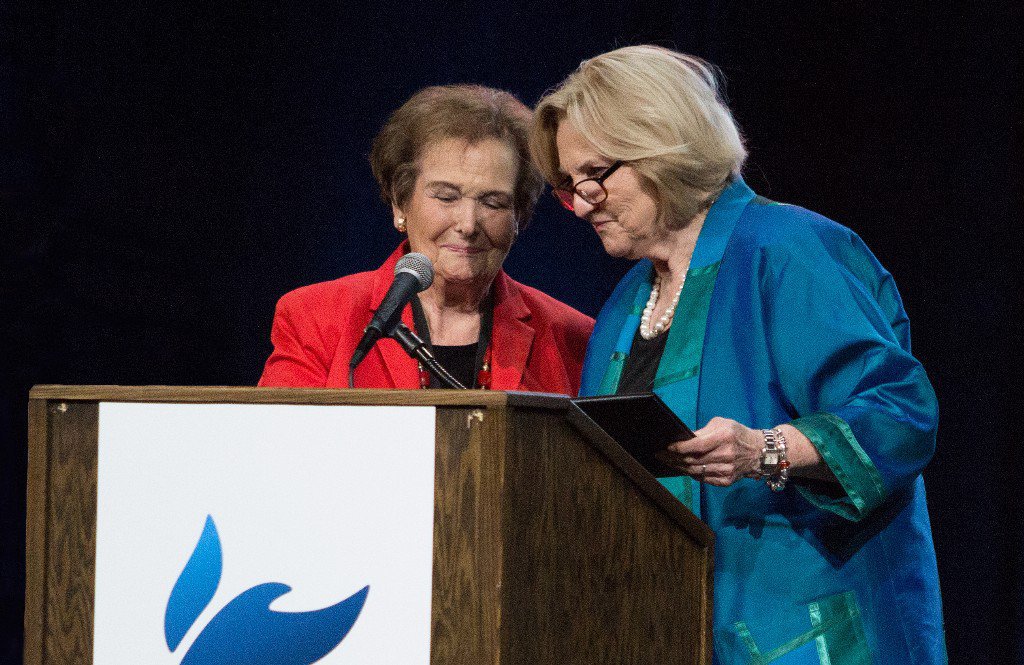 On Tuesday morning, June 7, at General Conference, Dr. Jo Anne Lyon read a citation of appreciation for the extraordinary lifelong service of Mrs. Bobbie Strand (pictured, left, with Dr. Lyon). Her sacrificial service in local Wesleyan churches, districts, the general church, at educational institutions, and at World Hope International has made a distinct difference in helping Wesleyan ministries thrive.

The citation in full follows:

Bobbie Strand was born into a ministry parsonage in Atlanta and later her father became the Director of Hephzibah Children’s Home where she lived for a brief time. After High School in Central, South Carolina she headed to Marion College where she became a very successful English student.

Bobbie served in a variety of stations such as the General Superintendents’ Office of The Wesleyan Church under Dr. McIntyre and Dr. Sheets; in the Wilmore, Kentucky area schools near Asbury Seminary; a rural church in South Dakota; and among university students, also in South Dakota. After moving to Michigan, Bobbie became the founder of Women’s retreats where some of the best contemporary speakers available were introduced to the Wesleyan world.

It was at Kalamazoo College where Bobbie found a new calling in the field of development and fundraising, ultimately becoming a principal in the management-consulting firm Benz-Whaley-Flessnor out of Minneapolis. In this capacity she wrote the book entitled, A Kaleidoscope of Prospect Development informed by her experience consulting with a great number of Universities, Symphonies, Art Museums and other institutions throughout the US and Europe. She also became the leading consultant for the renovation of the Statue of Liberty, working alongside Lee Iacocca.

Bobbie’s influence on Houghton College is particularly notable among her many areas of investment. She began serving on the board of Houghton College in January 1994. After faithfully serving for 14 years she became chair of the board in October of 2008.

From the very beginning serving Houghton College initially as a consultant, and then on the board, Bobbie has encouraged Houghton toward best practices in every arena of its operations. As board chair, she has masterfully guided the board through challenging discussions, always calling out the tough questions and the minority opinions in such a way that the final decisions are stronger and more fully owned because everyone has been heard. She has called Houghton to a large vision of its role in The Wesleyan Church, and to a creative vision of its role in God’s Kingdom.

Parallel to this she has served as a member of the District Board of Administration of the Iowa-Minnesota District and a member of the Wesleyan Educational Council. Significantly, she is a founding member and current member of the Board of Directors of World Hope International.

On behalf of this entire General Conference of The Wesleyan Church, we express our gratitude for the priceless influence Bobbie Strand has had on the Church she loves and has served. You, Bobbie, are a churchwoman and a servant to the institutions of the Church. Thank you!