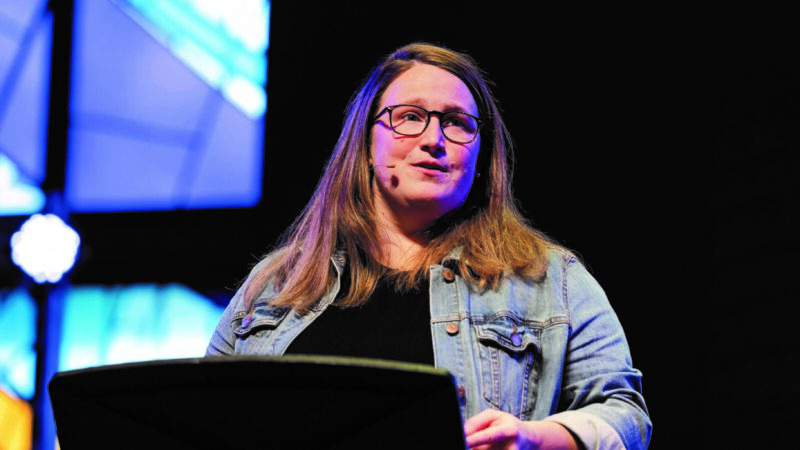 Before Torrey Martin took over as Oklahoma Wesleyan University’s first-ever University Pastor in July, she spent months strategizing with university leadership. While envisioning what the new position would look like, the team considered an ambitious goal: What if every person that engaged with OKWU came to have a personal relationship with Jesus?

It’s remarkably audacious — but after more time thinking things through, the objective made sense. “That’s what it’s about, right?” she says. “Why wouldn’t we make the goal that every person who engages with OKWU comes to find a relationship with Jesus? Some of them for the very first time, others taking the next step. Why not chase these big, audacious things, this Kingdom-sized vision? We serve a God that is more than able.”

This message — God is big enough to overcome doubt, obstacles, or even just natural human hesitancy — has been apparent throughout Martin’s life and career, as He’s guided her on a path to Oklahoma Wesleyan University.

Born and raised in Tipton, Indiana, Martin was the youngest child in a churchgoing family. She gave her life to Christ at the age of six and first sensed her call to ministry in middle school. Still, for a couple of nuanced reasons — including a denominational context that wouldn’t have supported a woman in the position of pastor — she kept this calling to herself. After high school, she decided to enroll at Indiana Wesleyan University, but not to pursue ministry.

“I convinced myself, and did my best to convince the Lord, too, that I was supposed to be a nurse,” she says. “I was looking at the trajectory of my life and chose to take a step towards what made sense from a worldly standpoint, rather than taking a step towards the very thing I knew God had long been calling me to.”

In fact, when Martin enrolled, she knew nothing about The Wesleyan Church’s affirming stance on women in ministry or, indeed, much at all about the Wesleyan-Methodist tradition. For some, that might be coincidence. Martin knows better.

“The Lord guided me to attend Indiana Wesleyan, where I was an 18-year-old holding firmly to the script I had written for my life,” she says. “Providentially, the Lord flipped that script on its head, and it happened to be I was in the right environment for that to happen.”

Martin double-majored in Christian Ministries and Business Administration, graduating in 2017. Her first stop was a pastoral ministries residency at a Wesleyan church in Columbus, Ohio, where she was later hired. In November of 2019, she left the posting: “I sensed, in my departure, that the Lord was trying to get me in the lane of ministry that He ordained for me.”

Martin took this step of faith, uncertain of what her path might be but confident that it would involve ministering to young adults, a heartbeat passion for her. A few months later, she got a call from President Dunn. Would she be interested in joining team OKWU?

In short, no — at least, at first. “Moving to Oklahoma was not on my radar,” she says. “But it was an invitation I couldn’t turn down after prayerfully considering it.”

Looking back, Martin remembers one particularly thrilling aspect of God’s faithfulness through this period. “My Gideon moment. After leaving my position in the local church, I said, God, I know I need a little bit of a reprieve — at least a month, but definitely no more than six months,” she says.

“The date from which I resigned to the date I moved to Oklahoma was six months to the day. Again, the Lord orchestrates the details as only He could.”

Martin, who had never been to Oklahoma before, accepted the job of admissions coordinator sight-unseen, arriving in Bartlesville two months into the COVID-19 pandemic.

Through her first two years on campus, Martin’s heartbeat for students’ spiritual formation was evident. She even worked on a taskforce seeking to further develop spiritual life on campus. It wasn’t long before President Dunn asked her to consider a new position at OKWU: the University Pastor role.

After beginning on July 1, Martin is focused on laying a foundation for spiritual life. “I long for this to be a Christocentric experience,” she says. “Jesus at the center, not simply Jesus as only a part of what we do.”

To that end, her message for students is simple. “God is for you. I see my role as an overflow or an extension of that, for seeing lives completely transformed through a personal, dynamic, and vibrant relationship with Jesus. As the University Pastor, I get to journey alongside our people — students, faculty, staff, alumni, or friends of OKWU near and far. I’m beyond honored and humbled to serve and lead in this way.”

That journey isn’t new for Martin. It just so happens that the future on that path is especially bright in Bartlesville, Oklahoma.

The Wesleyan Church celebrates Rev. Martin and her new role at OKWU. She joins Rev. Dr. Andrea Summers, Indiana Wesleyan University’s (IWU) campus pastor and dean of spiritual formation, as women appointed and uniquely positioned to lead and shape the lives of young adults entrusted to our WE5 schools. Read more about Dr. Summer’s role, which began in 2020 at IWU.