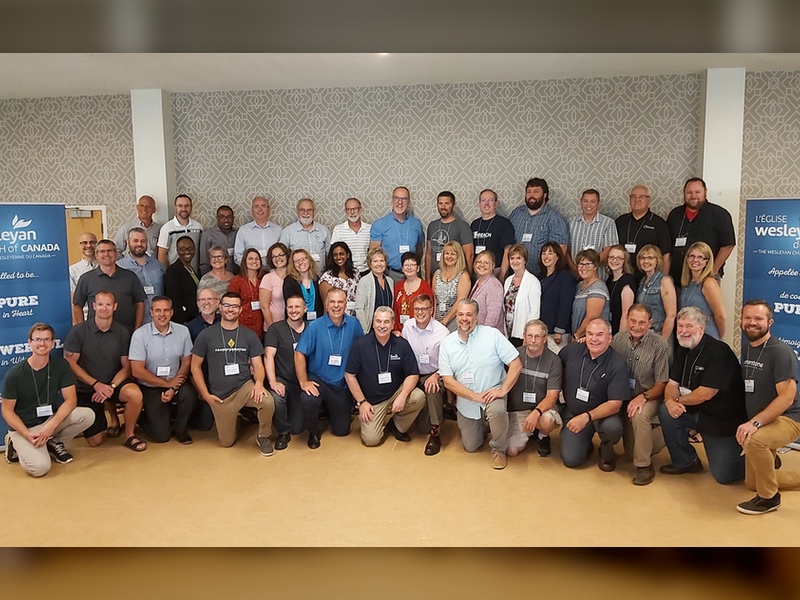 "We are excited as we prayerfully pursue ministry opportunities and a vision for church health and multiplication, which is uniquely designed for the post-Christian context of Canadian culture."

The Established National Conference of The Wesleyan Church of Canada held its inaugural national conference on August 14 and 15 just south of the city of Montreal at the Manoir D’Youville Conference center (a former Catholic convent) located on a beautiful island in the Saint Laurence River.

Dr. Stephen Elliott succeeded Dr. H. C. Wilson as the first elected National Superintendent and served as the chairperson for the business sessions. In addition to elections of the national board, receiving financial statements and statistical reports, the delegates from the Atlantic and Central Canada districts also enthusiastically adopted: new by-laws, purpose and mission statements, core values, ministry strategies and a vision for church/ministry multiplication specific to the Canadian setting.

“The Wesleyan Church of Canada is deeply appreciative for the warm support, partnership and practical encouragement which our leaders at TWC Headquarters in Indianapolis, Indiana, have and continue to provide to those of us north of the border,” said Elliott. “We are also excited as we prayerfully pursue ministry opportunities and a vision for church health and multiplication, which is uniquely designed for the post-Christian context of Canadian culture.”

As a quadrennial theme the Canadian church adopted the motto, “Called to be … Pure in heart like Jesus, Powerful in witness by the Holy Spirit, and Passionate in love for the Father, the lost and the hurting” or “Called to be… Pure, Powerful and Passionate.” The Canadian church is also spearheading a nationwide, 70-day Bible reading and journaling initiative beginning in January of 2020. The conference concluded with two tours, a bus prayer tour of Montreal and a pontoon boat tour highlighting the history of the island conference center.

In addition to times of vibrant worship, great meals and fellowship opportunities, Dr. Wayne Schmidt, General Superintendent of The Wesleyan Church, and Dr. Brian Stiller from the World Evangelical Alliance served as the keynote speakers. Representatives from World Hope International, Global Partners, Education and Clergy Development, Wesleyan colleges, universities and seminaries, Evangelical Fellowship of Canada and Compassion Canada spoke and provided promotional displays. Delegates, guests and observers shared many positive comments about both the content and overall atmosphere of the conference.