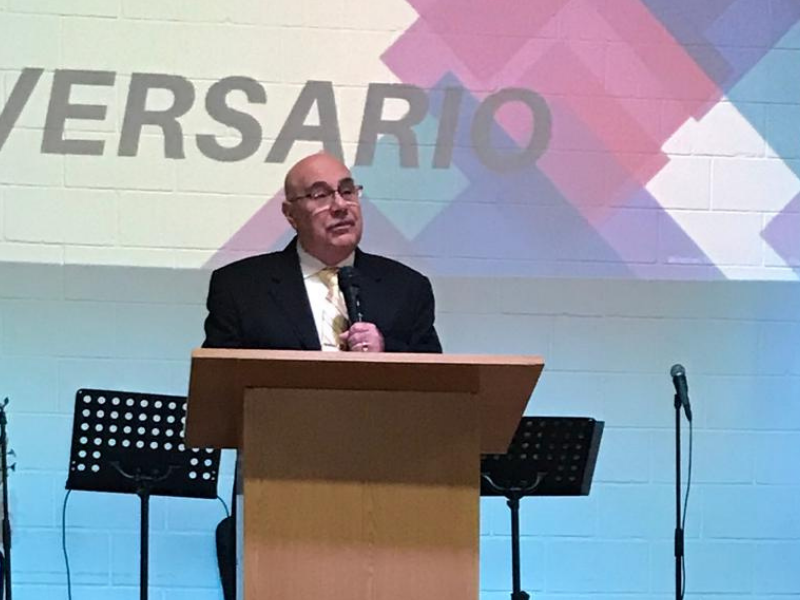 His 47 years in ministry include planting 26 churches and "consolidating a united body of Hispanic ministers fully identified with ‘biblical holiness’ and The Wesleyan Church.”

Rev. Wes Smith, district superintendent of the Northwest District, will step in as interim.

Chacon began service in Distrito Hispano Suroeste as Dr. Steve Babby, then the district superintendent of the present Pacific Southwest District, recognized the need for Spanish-speaking holiness churches to work toward their own collaborative ministry. This recognition resulted in a new district: Distrito Hispano Suroeste. Pastors of the district’s rapidly-growing Hispanic churches overwhelmingly elected Chacon as their superintendent.

“Edgar Chacon is one of the greatest leaders of The Wesleyan Church,” said Babby. “What he accomplished was not random — he looked beyond the limitations to develop a team for the long-term.”

“My most outstanding projects were starting from scratch and organizing it in every sense of the word, consolidating biblical-theological education through La Facultdad Teologica Wesleyana for all pastors … planting 26 new churches and consolidating a united body of Hispanic ministers fully identified with ‘biblical holiness’ and The Wesleyan Church,” said Chacon.

Looking forward, Chacon’s colleagues in The Wesleyan Church anticipate how his strengths in building healthy churches will continue to be employed in this new season, as he partners with the Northwest District to help with church multiplication efforts.

“More than a ‘retirement,’ the conclusion of his service as district superintendent will position him to focus even more on his long-recognized strengths in education and church planting,” said Dr. Wayne Schmidt, General Superintendent of The Wesleyan Church. “DHS and the Northwest District have already been exploring how to leverage their combined strengths to reach the growing Hispanic population in their ZIP codes. Rev. Wes Smith’s continued leadership of the Northwest District, combined with his appointment of interim district superintendent of DHS will further their collaborative efforts.”

Chacon maintains a reputation among his pastors as a developmental and collaborative presence, known for helping clergy and laity work together to build healthy congregations. Rev. Tony Barboza, of Iglesia Wesleyana El Buen Samaritano, is among those impacted by Chacon.

Barboza first met Chacon at age five, when his mother was struggling to raise her children while caring for a husband struggling with mental illness. Chacon arrived in their neighborhood, preached from the top of a small car and over 50 members of Barboza’s family were impacted by the gospel.

Later in life, Chacon encouraged Barboza to attend Bible college, even paying tuition when Barboza was unable to afford it. Now leading his church in Winston-Salem, North Carolina, Barboza reflected on Chacon’s influence. “He’s inspired me to serve Christ, he invited me to the ministry when I did not believe in myself and he’s taught me to share the grace of the Lord with people in need,” said Barboza. “I guess pastor Edgar is a planter among millions, planting good seed in the hearts of families, cities and ministerial work.”

Dr. Anita Eastlack, executive director of Church Multiplication and Discipleship, noted that Chacon’s passion for ministry has had a direct effect on Hispanics coming to Christ.

“I celebrate the church multiplication passion that I have witnessed within Distrito Hispano Suroeste,” said Eastlack. “This new season brings opportunity for a strategic partnership and broader vision with even greater collaboration to reach the growing Hispanic population in the west. As The Wesleyan Church continues to mobilize a Kingdom Force to make disciples and multiply churches, I am thrilled to see more and more of our Hispanic leaders being bridged into the heart of the movement. When TWC truly becomes a church-multiplication movement, we will be multiethnic, everyone serving side-by-side to transform lives, churches and communities through the hope and holiness of Jesus.”

As he enters the next season of his ministry, Chacon asks that Wesleyans pray for renewed strength, good health and “the power and grace of God over my life to continue serving him in his kingdom until he brings me into his presence.”