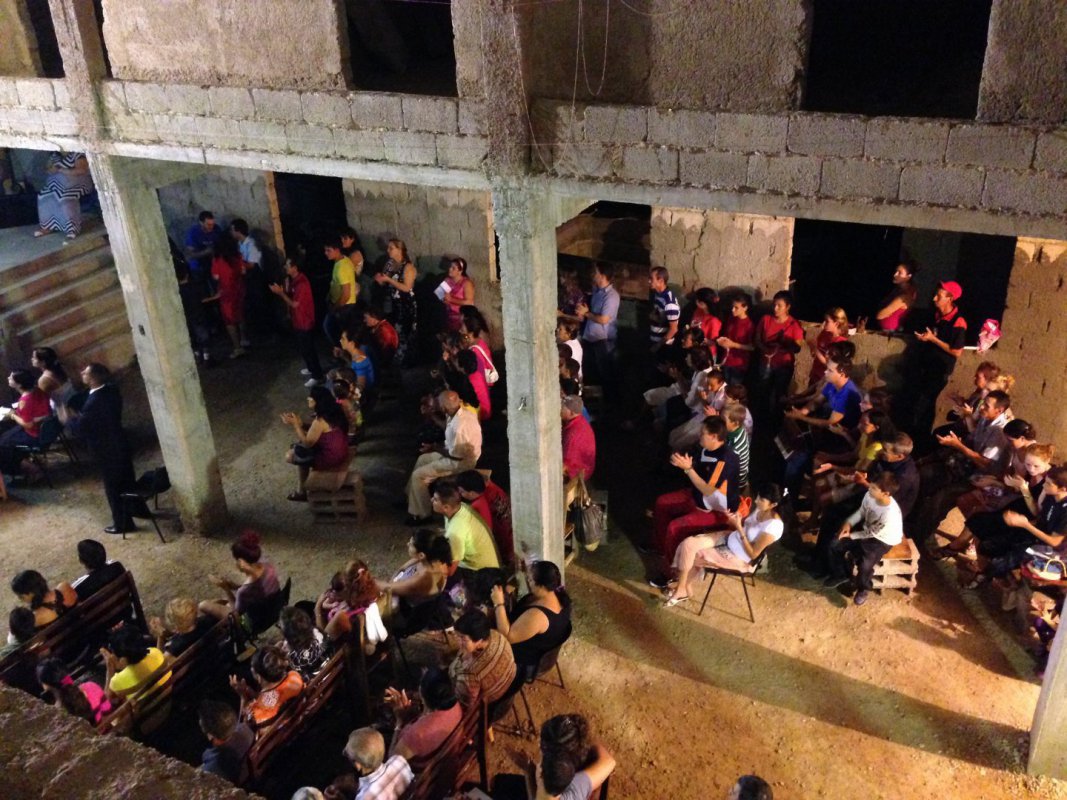 Chesapeake District reports ministry happenings, whether in communities of its churches or abroad in Cuba and Ecuador.

Nightclub turned into place of healing and hope

After two years of experiencing the joys of a portable church and two weeks of having worship just outside their new location, Healing Place Church in Waldorf, Md., opened wide the doors on Sunday, November 16, 2014, for their grand opening celebration services. The energy was palpable as Pastor Moe Diggs shared with the nearly 400 in attendance that this space which operated once as a night club is now transformed into a home for a church that seeks to bring healing and hope into the surrounding community and beyond. Yes, even the very spot where a dance floor once existed in darkness has been reconstructed into a beautiful auditorium that now celebrates the joy and light of Christ on God’s great dance floor.

In November Pastor Mark James, along with four other men from Easton First Wesleyan Church in Easton, Maine, and a group from North Carolina assisted in the construction of a new Wesleyan Church in Cuba. This is the first church construction the Cuban government has allowed for over 50 years, taking ten years just to get the permit to build. Although the church is not finished, the team attended the first service in the building while onsite in Cuba. Pastor Mark observed, “God is definitely at work in Cuba.”

There are forty congregations in Cuba: 18 organized churches and 22 preaching points, which fall under two districts. The leader, Pastor Nehemiah, whose home the team stayed in, has a tremendous vision for The Wesleyan Church in Cuba.

Pastor Mark commented that perhaps the greatest thing that happened was what God did in the hearts of our team. The team chemistry was awesome, and we felt welcomed, safe, and loved. Pastor Mark stated, “If you’ve never been on a mission’s trip, you should go at least once.”

Bibles and clothes for Ecuador

The children’s ministry of Laurel Wesleyan Church in Laurel, Del., raised funds (by giving money that would have been spent on treats) to buy Spanish Bibles, and the adult congregants were then challenged to out-give the children. The children won the challenge and Pastor Scott Conn and Pastor Ben Spear received the honor of getting pies in the face on Sunday, November 23, since the adults lost the contest. Over $500 was raised through the efforts of the children and adults. Also in the month of November, the congregation collected summer clothing to donate to families in need in Ecuador.

Congregants leave the building to serve their community

The “Church Has Left the Building” is more than just a motto for New Life Network. November 8-15, 2014, was designated as “Serve Week” among New Life Church, Kneeling Point, and Servants of Christ in LaPlata, Maryland. Approximately 450 congregants registered to be the “hands and feet of Christ” by serving at various locations within southern Maryland. Activities included serving with organizations working with the homeless and providing shelter for women and children, participating in a walk to help end homelessness, cutting and hauling wood to those in need, cleaning up along a river plus volunteering with an organization addressing child abuse, helping at a crisis pregnancy center, as well as volunteering with an organization working with those who are under-insured or without insurance.

In addition to working with local partners within the community, donations were collected for local safe houses, for Thanksgiving baskets for the homeless, and cell phones for a local organization working with domestic violence. Approximately 900 shoeboxes supplies were collected for Operation Christmas Child. People were also encouraged to serve individuals within their own neighborhood. Those efforts included raking leaves, participating in the Color Run in Baltimore, serving at a local spaghetti dinner for veterans, visiting shut-in neighbors, serving as a math tutor at a local school, visiting nursing homes, driving neighbors to doctor appointments, cooking meals for shut-in neighbors, volunteering at local schools, and serving on boards of local organizations.

Pastor Mike Hilson announced the donation of $30,000 to The Wesleyan Emergency Relief Fund for the purchase of an ambulance to help fight Ebola in Sierra Leone. All of the support given through missions and outreach is due to the continued practice of designating 10% from tithes and offerings.

New Life Network is looking forward to encouraging people to not only serve once a week, but continue the practice of being the “hands and feet of Christ” throughout the entire year.

Pictured: Worshipping in a church in Cuba.