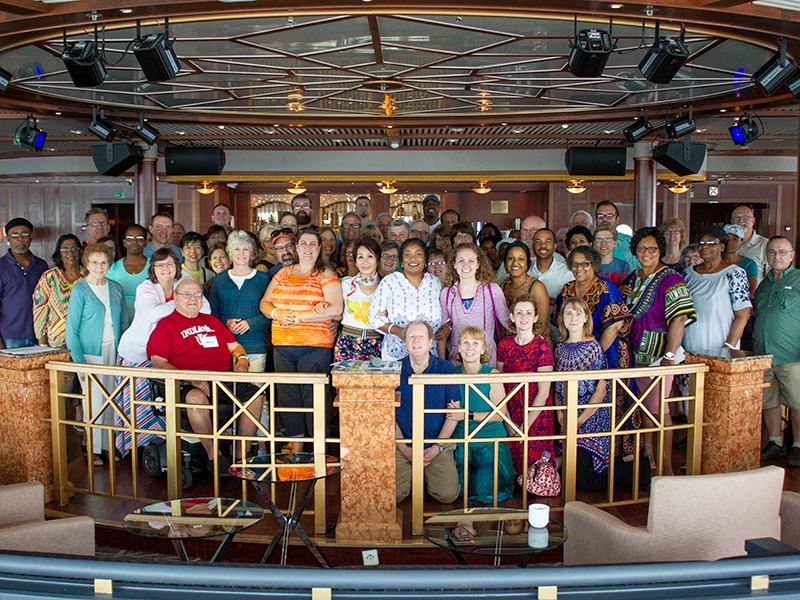 Nearly 100 Wesleyans, lay and clergy, gathered May 21-25, 2018, for a discipleship conference. Two facts made this gathering unique – they gathered on a cruise ship and disembarked on Cuba. According to Reverend Rick West, Global Partners missionary to Cuba, 13 was the largest group of Wesleyans previously assembled on the island.

While the planned worship service with Wesleyans in Havana, Cuba, was not possible, some met with a group of Wesleyan pastors during the one-day visit to the capital city of Cuba. Intercessory prayer was also a part of that encouraging time.

Pastors Steve DeNeff and Ken Nash, as well as members of Church Multiplication and Discipleship, led training sessions and workshops. DeNeff spoke on “Made New! Living the Life of a Disciple” and Nash spoke on the “Key to Creating a Discipleship Culture: Unleashing Laity.”

In addition, West provided an update on current Wesleyan ministry in Cuba, Pastor Wayne Lyon shared childhood stories and testimonies from when his parents served Cuba as missionaries and Ambassador Jo Anne Lyon offered a devotional asking what it would look like if we fully trusted God. Rev. Chase Stancle, lead pastor of Unison Christian Church, lead a diverse worship team assembled from Grand Rapids, Michigan, and Buffalo, New York.

“Throughout our time together, Wesleyans worshipped, deepened their understanding of discipleship and witnessed to people on the ship and shore,” said Rev. Kim Gladden, director of Discipleship in Church Multiplication and Discipleship and conference coordinator.

“From missing sessions for arranged witnessing conversations, to inviting people to join us for our services, to reports of spa therapists singing along to our worship music, and Norwegian Cruise Line staff and beach goers joining us for communion, multiple touch points happened,” Gladden said, as she expressed gratitude for all the initiatives participants did to share their faith while on the cruise.

Participants traveled from Alaska, Kansas and Canada, and included islanders from The Wesleyan Church in St. Vincent and the Grenadines.

“As part of our vision for having a transforming presence in every ZIP code, we have been emphasizing the fact that it will take an ‘all-hands-on-deck approach’ or a kingdom force to reach the variety of people in those ZIP codes,” said Anita Eastlack, executive director of Church Multiplication and Discipleship. “It was thrilling to see how God assembled a beautiful group of people on the cruise to deepen our commitment to making disciple-makers. We were Wesleyans from outside and inside North America, multigenerational, multiethnic, as well as including lay people and clergy, women and men.”