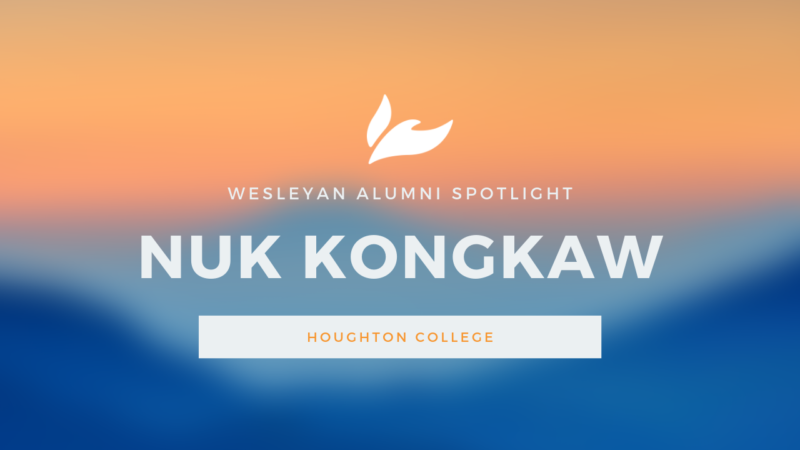 “Houghton took a risk and invested in me as a prospective student.” Kongkaw said. “When I first visited there, I felt strongly that this could be a community for me.” 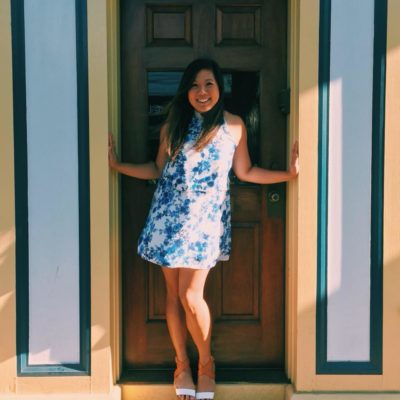 Once per year, College Wesleyan Church in Marion, Indiana, celebrates World Communion Sunday by inviting congregants from a variety of cultural backgrounds to serve communion in their native languages. Nuk Kongkaw attends College Wesleyan and over the past few years has served communion at a station representing her home culture of Thailand.

“In the language of Thai there is a diglossia, which is a ‘high language’ only used to talk to God and is generally reserved for royalty. Speaking in this diglossia really emphasizes the majesty of God, and you don’t necessarily get that in English. When I am speaking in this high language to the people who are coming and receiving communion from me, it’s like I am speaking to them as if they are royalty,” Kongkaw said.

Coming from Thailand to the United States at age 2, Kongkaw has experienced some of the barriers to building community in her own life. Because of those experiences, Kongkaw seeks to cultivate empathy and compassion with those she encounters. She believes interacting with people of different life experiences makes a Christian more effective in the kingdom.

Part of this conviction emerged from Kongkaw’s own journey in higher education. Because Kongkaw’s parents were missionaries in Thailand, she couldn’t afford to visit many colleges in the United States. The visits she did have, however, were important in helping her identify whether the type of communities she visited were the ones she’d want to shape her educational experience for the next four years. Although she didn’t have previous interaction with The Wesleyan Church (TWC), Houghton College’s East Meets West Honors Program helped sponsor Kongkaw to come interview in person.

“Houghton took a risk and invested in me as a prospective student.” Kongkaw said. “When I first visited there, I felt strongly that this could be a community for me.”

In 2011, Kongkaw graduated from Houghton with a double major in intercultural studies and teaching English to speakers of other languages. After graduation she taught in China for three years and then attended Indiana Wesleyan University (IWU) to pursue a master’s degree in mental health counseling.

Kongkaw has chosen to be a part of TWC because of what she has learned about our denomination’s history and traditions.

“I choose to be a part of The Wesleyan Church specifically because of their history and their tradition as free people. The Wesleyans wouldn’t stand for slavery and also offered ‘free pews.’ In the past, only the wealthy who could afford to buy pews could sit toward the front where you could hear the sermon. Wesleyans offered free pews where anyone could have a seat regardless of their financial standing. As a denomination, The Wesleyan Church has critically looked at things in place and barriers that keep people from Christ and experiencing Christ in community. That’s why I have chosen to be a part of institutions like Houghton and IWU. I appreciate the commitment to critically examine these things and push ourselves to grow,” Kongkaw said.

When this interview was conducted, Kongkaw was the counselor coordinator of intercultural student engagement at IWU, through which she served as a mental health counselor and higher education professional. Because of these dual roles and her own areas of expertise, Kongkaw works to address overarching systemic issues and needs while also partnering with individuals to help them find wholeness. Since this interview was conducted, however, Kongkaw has accepted a position at Houghton College as the director of the Mosaic Multicultural Center, starting August 1, 2019. This new position will allow her to continue using her skills in fostering equity, justice and inclusion.

Kongkaw is also pursuing her doctorate in counselor education and supervision at Regent University. To hear more about Kongkaw’s leadership at the Mosaic Center in coming months, visit Houghton.edu.