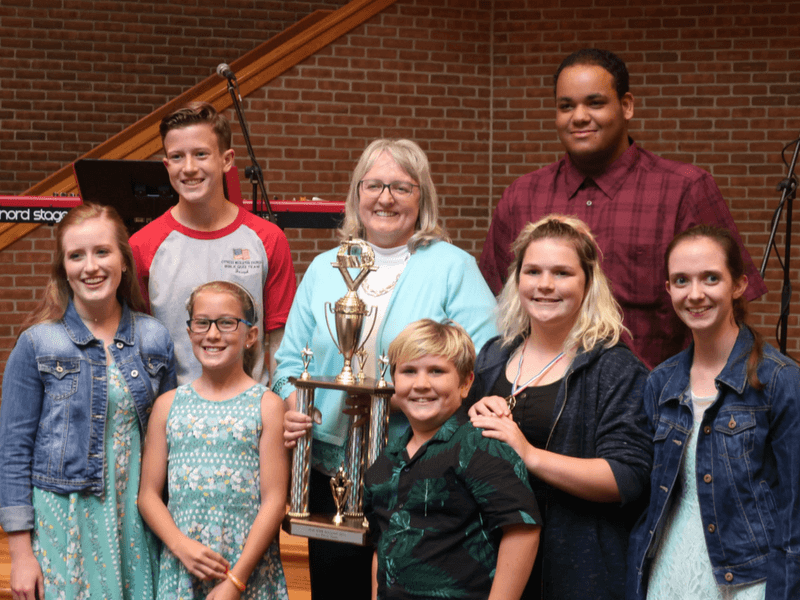 Winners will receive a scholarship to a Wesleyan college or university of their choice.

After months of hard work, study and memorization, teams of Wesleyan quizzers from across the nation gathered for the annual Wesleyan Bible Bowl National Tournament at Indiana Wesleyan University in Marion, Indiana. They have studied 1 and 2 Corinthians, meeting weekly for Bible studies and practices and attending various practice quizzes in their regions. Some have competed in both Wesleyan and Nazarene tournaments.

Wesleyan Bible Bowl is committed to discipleship, fellowship and scholarship — engaging the spirits, hearts and minds of students in a way that will enable lifelong growth through the study of the Word of God.

During the first two days of competition, teams participated in preliminary rounds that determined rankings for the final day of competition. In the top division, Christ Wesleyan (Milton, Pennsylvania) entered the finals as the top seed, having gone undefeated in the preliminaries. However, the reigning champions from Cypress Wesleyan (Galloway, Ohio) won the day with a championship quiz that came down to the final question. Sweetser Wesleyan (Sweetser, Indiana) finished second, with Milton falling to third on the day.

Members of the winning team from Cypress include Lacie Gano, Tony Gano, Eric Johnson, Andrea Munroe, Anna Phillips, Joseph Phillips and Sarah Phillips. They each will receive an $1,100 scholarship to the Wesleyan college or university of their choice. Their team is led by long-term coach Theresa Lotchefeld.

Teens also competed as individuals. In the toss-up category, which focused on buzzer work against other individuals, Dillon Stewart of Sweetser emerged as the winner in his final year of quizzing, followed closely by Andrea Munroe of Cypress. Grace Deitrick and Katherine Reed, both of Milton, tied for third. In the written competition, Munroe took top honors, followed by Deitrick and Stewart. The hard work of these quizzers, along with the rest of the top ten in each category, will be recognized with scholarships totaling $15,000 per category.

Color Wars was new to the event this year, an attempt “to give students an outlet to help build friendships and fellowship with other quizzers from around the nation.”

“Most individuals tend to stick with what they’re comfortable with, but to incorporate true discipleship and fellowship, we needed to get kids to experience how to work with and communicate with new people,” said Nate Crawford, quizzing tournament coordinator.

Teens will study the Gospel of John in the year ahead.