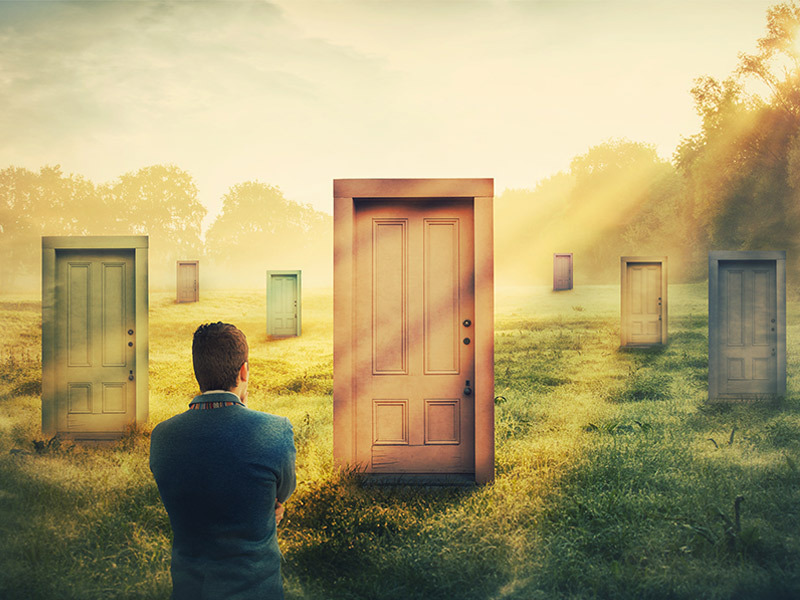 Resist looking longingly at closed doors or staring up in the sky too long. There is more to do.

A colleague of mine, Tim Fox, posted the following statement: “The famous saying, ‘when one door closes, another door opens,’ is actually a famous quote by Alexander Graham Bell. The quote ends with, ‘but we so often look so long and so regretfully upon the closed door, that we do not see the ones which open for us.’” I’m not sure why the second part of the quote never got much run, as it seems to be pivotal.

It is very easy to get lost in regret and rue. We regret missed opportunity and rue the sense of what might have been. A key reason we look so longingly after the closed door is that we don’t have the imagination to see what else might be. We have locked in on the one option at the expense of others. When a sought-after door closes, it is much safer to assume another will as well. We can claim we tried but, “Oh, well.” We can take solace in the “what if” or the “might have been.”

What is needed is someone to come along and tell us to snap out of it! We need an individual who might get our attention and nudge us to look in another direction. Or someone to tell us what we can and should do next.

I am reminded of the story in the Bible. A group of men who had followed Jesus for three years were caught in a closed-door stupor. Jesus had risen from the dead. He needed to return to his heavenly Father.

In Acts 1:9-11 we read: “After he said this, he was taken up before their very eyes, and a cloud hid him from their sight. They were looking intently up into the sky as he was going, when suddenly two men dressed in white stood beside them. ‘Men of Galilee,’ they said, ‘why do you stand here looking into the sky? This same Jesus, who has been taken from you into heaven, will come back in the same way you have seen him go into heaven.’”

These men were looking at what they perceived as a closed door. They were simply staring into the sky until some “men dressed in white” — I assume angels — asked them why? Jesus had ascended. That door on earth was closed, but there would be others that would open. In verse 12, we are told they returned to Jerusalem. It was there they discovered the next set of open doors.

Doors open; some we open, some others open for us. And doors close; some we close and others close them on us. Resist looking longingly at the closed door. Do not stare up in the sky too long. There is more to do.

Dr. Phil Stevenson serves as district superintendent for the Pacific Southwest District of The Wesleyan Church.