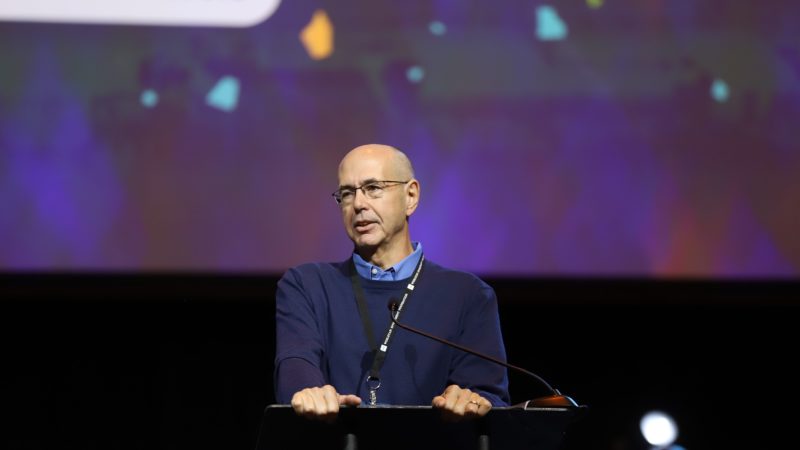 The title of General Superintendent Emeritus was conferred upon Dr. Thomas Armiger by the 14th General Conference.

On Monday of the 2022 General Conference of The Wesleyan Church (TWC), the title of General Superintendent Emeritus was conferred upon Dr. Thomas Armiger, effective at the rise of the conference. The action was affirmed through a hearty chorus of amens resounding across the conference bar. 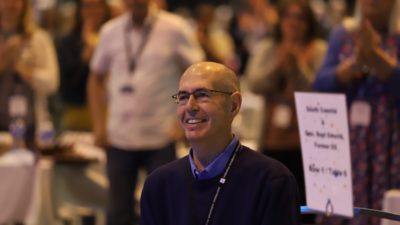 “The breadth and length of Dr. Armiger’s service to TWC is particularly notable,” said General Superintendent Wayne Schmidt. “He has served the church in many ways and in many seasons, locally and denominationally, and the significance of his service has been evident in North America and across the world.”

Dr. Armiger came into the General Superintendent Emeritus post after having served in various facets of The Wesleyan Church’s leadership over the past several decades. The kingdom work he has given includes youth pastor, lead pastor, director at Wesleyan headquarters, district superintendent and then General Superintendent from 1997 to 2011, during which he oversaw each North American administrative area, headquarter division, district and international field in TWC at some point during his tenure. His leadership allowed him to help districts to a position of sustained growth, a trajectory toward vitality that continued when his tenure in leadership concluded.

“Tom is many things; but especially, he’s kind,” reflected Rev. Steve DeNeff, senior pastor at College Wesleyan Church and member of the General Board of Administration when Dr. Armiger served as General Superintendent. Armiger’s kindness lent itself to a tenure marked by wise diplomacy and an aptitude for building consensus even in difficult discussions.

Rev. DeNeff recalls Dr. Armiger’s diplomacy being put to the test at an Australian conference when conversation became heated about a proposal on requirements for leadership. “The whole proposal was in jeopardy,” said Rev. DeNeff. “I watched Tom navigate a political and theological conversation with churches that were already tense — and he did it in the most beautiful way. He used humor, diplomacy, grace, forbearance, vision and just his normal kindness. And that allowed the conference to reconcile their differences. I walked out of the room shaking my head, saying, ‘That was gold.’”

Dr. Armiger is also known for his desire to see the youngest voices in our church proclaim, interpret and live out the gospel. “Tom was the first to invite one of our own Wesleyan youth to preach a denominational youth conference,” said Dr. Ron Kelly, who served with Dr. Armiger during his tenure at headquarters.

From 2011–2013, Armiger became president and CEO of World Hope International, the official Christian relief and development partner of The Wesleyan Church. But in 2013, the Armigers felt drawn to local church ministry and accepted a call to Villas Wesleyan Church in Fort Myers, Florida. During Dr. Armiger’s time there, the church has seen new life, as many have come to deeper knowledge of Christ and some have come to faith for the first time.

Since retirement in 2019, the Armigers have continued to find ways to serve their neighbors and their local church.

“Dr. Armiger is a man after God’s own heart who has fully stewarded the gifts God entrusted to him,” reflected General Superintendent Schmidt. “He has been an example to TWC in both who he is and how he serves.”

Rev. Ethan Linder is the pastor of discipleship at College Wesleyan Church in Marion, Indiana, and contributing editor at The Wesleyan Church’s division of Education and Clergy Development.

*Rev. Ron McClung served as contributing reporter for this article.