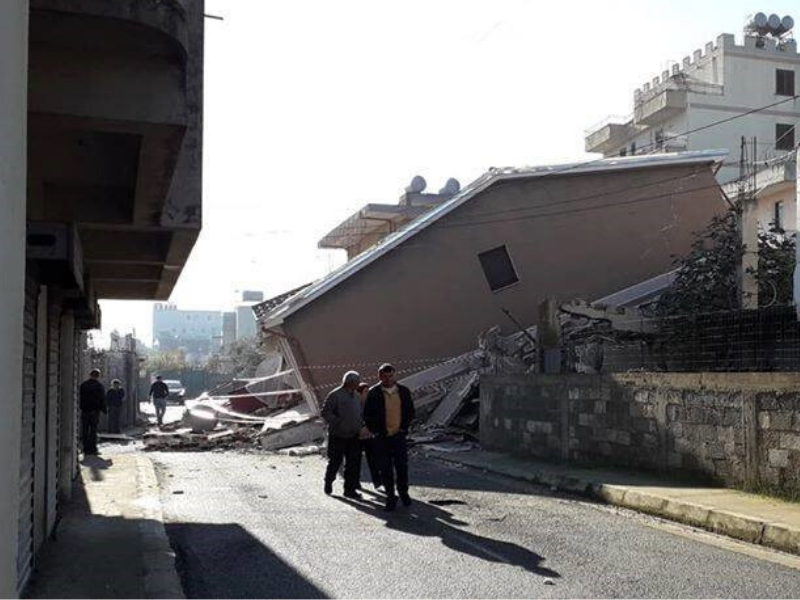 Earthquakes: breaking down strongholds in the New Year

We pray that this nation — formerly ruled by a Communist dictator and before that a Muslim regime  — will cry out and seek God in new and greater ways.

Our missionary team had been praying for God to break down century–old spiritual strongholds in the country of Albania when a month before Christmas, for roughly 50 seconds, a 6.4 magnitude quake shook our home, our neighborhood, our city and region.

While other places experienced stronger earthquakes in 2019, this quake was the deadliest of the year. Buildings collapsed, and over 50 people tragically lost their lives. As the day dawned several hours later, we began to hear reports of the loss and damage. Less than half a mile from our house, a six-floor apartment building had collapsed, killing several people and leaving others trapped inside.

A few blocks from us, eight members of one family — wives and children of men working outside the country — were crushed to death as their house came crashing down on them. Other buildings in our city of Durres and several in nearby villages had also collapsed. In the days that followed, there were other homes that were demolished, deemed unsafe to live in. Altogether 4,000 people were left homeless. After several strong aftershocks, half of our neighborhood retreated to their villages for several days, until they felt safe to return; the place felt like a ghost town on Thanksgiving evening.

As our community picks up hopes and dreams from the rubble, we are hearing encouraging reports of how God has been at work saving and restoring lives.

Fifty-one people lost their lives as a result of the quakes, but as we survey the damage, we know that the death toll could easily have been much higher — even three or four times what it was. There were almost as many people saved from the rubble of collapsed homes and buildings (45) as perished in this tragedy. We are thankful that an earlier quake around 2:00 a.m. prompted many Albanians to remain outside the rest of the night and not in their houses or apartments when the big earthquake damaged or destroyed so many homes.

We also praise God as we have heard personal testimonies of how God has been at work.

In one situation not too far from our house, the family’s house completely collapsed, and yet on the news, the elder member of the family reports that they were “having a big celebration” that day because “the Lord saved 15 members of their family” on the day of the earthquake. As is common in Albania, several generations of a family lived together in the house, and the man interviewed spoke specifically about his son’s family and how they saw no way to get out when the floor was giving way underneath their feet. He shared on television, though, that the Lord miraculously opened a way for his son, wife and daughter to get out safely, as well as the 12 others in the family.

Another story was carried on local Kosovar television. Kosovo is a primarily Muslim country comprised of ethnic Albanians. Years earlier, Albanians had sheltered Kosovars fleeing their homes during the Kosovo crisis. Now Kosovars were returning the favor as they sheltered Albanians leaving during the earthquakes. Some members of our Wesleyan church plant were hosted by a Kosovar family after the earthquake, and while there, they expressed their gratitude on television for the hospitality of that family who, up until that time, had been strangers to them. When we spoke to them after their return to our city, their teenage son related that while in Kosovo he had shared his faith in Jesus with a boy from the host family.

In the aftermath of the earthquake and aftershocks, our team has found 10 families in our neighborhood whose homes were damaged significantly and for whom we have provided some food, blankets, a heater, cooking gas and glass to repair a window, among other needed items, as some of those displaced were living in tents and makeshift housing.

In the days ahead, we anticipate more opportunities to minister in this way, as well as to assist families with their repair and rebuilding efforts, including for one family in our church. A listening ear, prayer and God’s truth have been the best remedy of all, though, for hurting people. We have talked to many panicked people who were unable to sleep in the wake of the earthquake and shared about Jesus sleeping during — and then calming — a storm, as well as Scriptures like, “In peace I will lie down and sleep, for you alone, Lord, make me dwell in safety.” (Psalm 4:8) We have also had chances to share just how important it is that we all consider our relationship with God and seek him even more.

My husband, Matt, was recently able to meet for coffee with Tom*, whose family we have ministered to following damage to their home. The time over coffee gave Matt an opportunity to get to know Tom better, speak at length about his faith in Christ and pray with him about his family’s needs. In the course of the discussion, Tom indicated that he would read a New Testament if Matt would give him one, and Matt suggested that they could even meet to read it together. Since then, Tom has been reading the New Testament that Matt gave him and has shown great interest in learning more about Jesus. The love shown as we helped meet some of Tom’s family’s physical needs has opened a great opportunity to dialogue about their spiritual needs as well.

We feel very grateful for how God spared the lives, and all homes but one, of those from our church. Our hearts do go out to one family whose teen girls are a part of our church, and close friends of our family, and whose house was left seriously damaged and currently uninhabitable from the earthquake. While the parents in the family do not believe like us and are from a nominal Muslim background, the girls in the family have been very active in our church. One of the girls helped lead worship for quite some time in our church and is now engaged. One of the girls has written notebooks full of Christian poetry, one of which was published in an Albanian Christian magazine. Both of those girls profess faith in Christ and have been baptized in our church. The other daughter has desired to be baptized soon, and in the last couple years we have seen a big spiritual change in her life, just like in her sisters’ lives.

On behalf of the Wesleyan Foundation, a local non-profit organization, we have committed funds to help pay for some of the repairs on this family’s home. Right now, the family is awaiting additional inspections and a building permit before they can proceed with our help to undertake those repairs. Unfortunately, as initial inspections of larger buildings continue, the process of completing inspections and issuing permits has been brought to a virtual halt for now. Temporarily, this family has had to stay in another village until they will be able to move back into their home.

The following poem (translated from Albanian) is written by the girl mentioned above:

“I was walking on a road without direction,
A road where no one could see me.
In a place of utter darkness,
Where I could not experience any joy.

I walked without knowing where I was going,
But hoping that I would glimpse a little light.
Even a light that shone dimly,
But one that would change my life.

The light I was looking for then was a little happiness,
Friendship and maybe some riches.
But what I found was unbelievable,
I got the salvation of my heart and finally a life full of joy.

The road I was walking on filled up with light,
It came alive and now my fear is gone.
Now instead peace, love, and goodness rule.
God’s Holy Spirit now reigns over every part of me.

Now I know what I should do,
To surrender my life to Him, Jesus, the only God,
Who saved our lives and covered us in love.”

When we first met these girls, they told us they had never heard the truth of the gospel before hearing it in our home. Now they believe in Christ. We hope and pray that the repairs on their home will soon get approved, then completed and they will be able to once again live in this city and rejoin our church. They have told us they have been unable to find a local church within walking distance for them to attend but are reading the Bible on their own.

It is not just those who lost loved ones or homes who have been affected by the earthquake, though. Many have told us that at the time of the earthquake, they heard many people cry out to God who ordinarily would not. We pray that this nation — formerly ruled by a Communist dictator for over 45 years and before that a Muslim regime for over 450 years – will cry out and seek God in new and greater ways than ever before. May these people spared from the earthquake experience the even greater salvation that comes from knowing Christ!