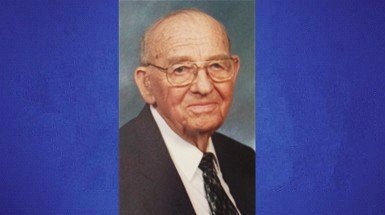 Ernest W. Lewis, 91, died on January 26, 2014 in Indianapolis. An ordained Wesleyan minister, he is remembered as a song evangelist and as a deeply Christian music professor at Wesleyan colleges.

Ernest W. Lewis, 91, died on January 26, 2014 in Indianapolis, Indiana. Growing up on the family farm near Boone, Colorado, he excelled in vocal and instrumental music.

He attended Colorado Springs Bible College for two years before he served in World War II with the 5th Army in Italy. Upon his return in 1945 he married Caroline M Nelson at the Pilgrim Holiness Church in Hopeton, Oklahoma. They began a life-long music ministry. The first four years they served as music evangelists, singing for revival and camp meetings. The next 25 years Ernie taught music at Pilgrim and Wesleyan Colleges which became Oklahoma Wesleyan University. He earned his B.A. degree from Azusa Pacific University, a Master’s in vocal music from Tulsa University and an honorary Doctorate from Burton University. He was an ordained minister in The Wesleyan Church. Ernie is remembered for his college choirs and his spiritual guidance. After retiring from the university he entered into church music and visitation ministries. In 2009 he and Caroline moved to Indianapolis to be closer to family.

Ernie’s most important legacy to his family and all those who knew him was his faith in our Lord Jesus Christ.