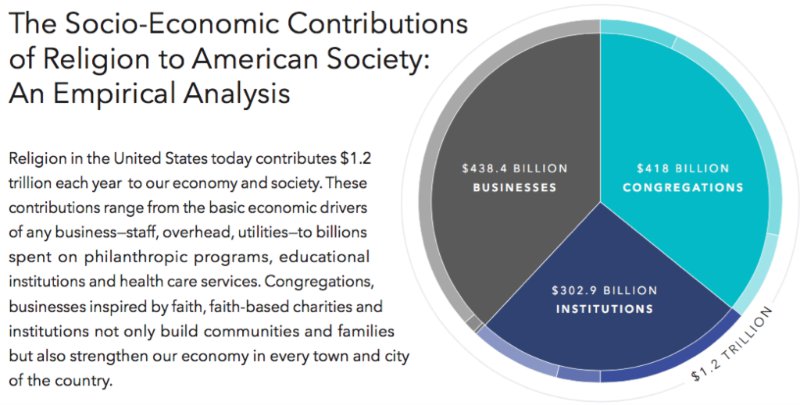 Faith in America has $1.2 trillion impact

In a panel today at the National Press Club in Washington, D.C., Brian Grim and Melissa Grim unveiled their groundbreaking new study: “The Socio-economic Contribution of Religion to American Society: An Empirical Analysis.” The first-of-its-kind study analyzed the economic impact of 344,000 religious congregations around the country, along with the economic impact of religious institutions and religion-related businesses. Dr. Grim found the total economic contribution of religion in America to be nearly $1.2 trillion, equal to the world’s 15th largest economy.

Despite prolonged economic hardship in many communities, the amount of money spent annually by religious congregations on social programs has tripled in the past 15 years. Some examples of the social issues addressed by these congregations and religiously-oriented charity groups include:

Operating alongside these charity groups and religious institutions sit faith-based and inspired businesses, which employ people in every field and industry. This fills the marketplace with goods and services used by people of all faiths, plus those with no faith at all. At the same time, religious schools educate millions of students from pre-K to the post-graduate level.

“For the first time, we have been able to quantify what religious institutions, faith-based charities, and even businesses inspired by faith contribute to our country,” said Dr. Grim. He continued: “In an age where there’s a growing belief that religion is not a positive for American society, adding up the numbers is a tangible reminder of the impact of religion. Every single day individuals and organizations of faith quietly serve their communities as part of religious congregations, faith-based charities, and businesses inspired by religion.”

The panel at The National Press Club included Dr. William Galston, Senior Fellow in the Brookings Institution’s Governance Studies Program, and Dr. Ram Cnaan, Professor and Program Director of the Program for Religion and Social Policy Research at the University of Pennsylvania.

Kerry Troup, spokeswoman for Faith Counts, states, “This study shows that faith is still a cornerstone of our economy and society, and we’re actively working together to celebrate and promote its value.”

For more information, including the full study and a video summary of the research, please visit www.FaithCounts.com/Report.