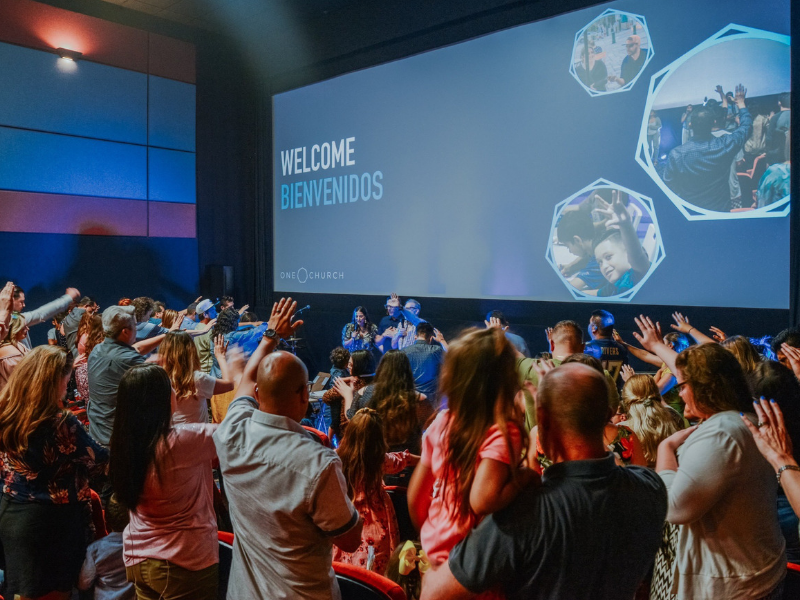 The new churches have an opportunity to have a Kingdom Force-impact in five different states.

Awaken City Church meets in Jamaica Plain, a neighborhood on Boston’s southwest side. Led by Rev. Melinda Priest, the need for a church in the city is great: only four percent of the population “claims to be in a relationship with Jesus.” On launch day, the congregation reflected the city’s multiethnic nature — at least nine countries were represented, which encompasses Awaken’s values to be a multiplying, multiethnic family. The church, which meets in a school gym, also offers Spanish translation during its services. Church leaders are already praying about which Boston neighborhood to plant in next. Pastor Amanda Oicle will lead the next church plant once her church plant residency is completed.

“This launch day was only the beginning,” said Priest. “The mission of Awaken City Church is to awaken all people to the life-transforming love of Christ and participate in God’s redemptive work in the world. We are humbled to join God where he is already at work in this great city!”

C4 of the Carolinas experienced God’s provision just days before its scheduled launch in Greensboro. Just one week prior to its official launch Rev. Ryan Sims, pastor, learned the city had lost its paperwork needed for renting space. But God worked out the details and just three days prior to launch, the leadership team was given the “OK” to use a local school.

Sims is part of a group of local pastors committed to helping multiply churches in Greensboro’s “840 Corridor.” (The 840 is the Interstate 40 beltway that goes around the Triad area, which is composed of three larger cities and a handful of smaller cities and townships.)

Sims sees a great need for a diverse church in the southern part of the city. He and his wife, Felicia, answered God’s call to plant a church with little hesitation.

“Over the course of our ministry, we’ve learned that we would forgo our preferences in order to mobilize the gospel,” said Sims. “So, it doesn’t matter if we sing a hymn, a contemporary song or a gospel song or if we serve decaf or regular coffee. God is always asking that we die to ourselves to reach the one.”

The community in Texas City, Texas, has welcomed RESONATE Wesleyan Church with open arms. Pastor Jervie Windom noted that, “One of our friends from a rehabilitation center we frequent drove her powered wheelchair half a mile to worship with us. This remarkable woman vowed to bring others to church, and she has done just that. She also records our services to share with her friends at the rehabilitation center, unable to attend to our worship services.”

Windom and his wife, Nilda, never planned to plant a church. The couple moved to Texas upon retirement from military service. While serving at their final military assignment in Virginia, Hurricane Harvey hit the Greater Houston, Texas, area in 2017. They’d already purchased their Texas home, and when they traveled south to check on the house, they discovered it was undamaged. However, they were the minority, as the storm caused $125 billion in damage and displaced many residents.

While helping with relief efforts, they opened their own home to minister to those in need. That changed their calling and their future.

“It was during our interactions with those most affected by the storm’s devastation that our hearts broke for our city, and our plans changed overnight,” said Windom. “We knew then God wanted us to start a church that would release healing, hope and the love of God in this recovering region.” Two years later, rebuilding is still happening in the region, and RESONATE is partnering with organizations to assist.

“We see hurt as hope’s greatest opportunity,” said Windom. “That’s why we are here.”

ONE Church in La Mesa, California, rented out a movie theater in the San Diego suburb and ran out of space as more and more people showed up to worship at the first service. At the conclusion of the sermon, 14 people indicated that they had placed their faith in Christ.

Rev. David Ordaz sees the deep need for a new church community in the city.

“God gave my team and me a supernatural love for San Diego,” said Ordaz. “It’s always on our mind. We see the good, we are aware of its situation, we see revival and we are ready to make a difference. “

Dr. Ed Love, director of Church Multiplication for The Wesleyan Church, is expectant for what God wants to do in the launching of these churches.

“Whenever a new church starts, I am filled with joy because I know there is an intentional team behind the scenes that is praying, planning and passionately pursuing those who are disconnected from Christ and the church,” said Love.

A week after these four launches, Way City Church launched in Speedway, Indiana, on September 15. Pastor John Miller and his wife, Heather, are natives of Speedway, located on Indianapolis’ west side and home to the famous Indianapolis Motor Speedway. The Millers returned to Speedway because, “We know that there is a need for new, growing churches that are actively making disciples and reaching young families.”

The Millers love their hometown and desperately want to see the church’s mission and vision statements lived out as they seek to see men, women and children in “the Way” (Speedway’s nickname) follow the One who is “the way, the truth, and the life” (John 14:6).

General Superintendent Dr. Wayne Schmidt requested prayer on both Sunday mornings (September 8 and 15) on his Facebook page, as these churches launched. He’s excited to see how these churches will be a Kingdom Force within The Wesleyan Church.

“Would you join me in praying for four Wesleyan churches and pastors whose church plant is having their ‘public launch’ today?” (He named the churches above on his post.) “Holy Spirit, be evidently present and powerful as these churches gather to worship today!” (Posted on September 8.)

“Praying for Pastor John Miller and Way City Church as they publicly launch today in Speedway, Indiana — right here in the greater Indy area. Praying also for the four churches that launched last Sunday — week 2 is always uniquely challenging for new churches. Will you join me in prayer?” (Posted on September 15.)

“There are so many things to celebrate — it is truly a Kingdom Force (multigenerational, multiethnic and multieconomic, women and men, lay and clergy) of pastoral leaders and launch teams, spreading from coast to coast,” said Schmidt.

Two churches in Canada recently co-launched another one in Nova Scotia. Read the article (written prior to launch).

Learn more about church multiplication within The Wesleyan Church.