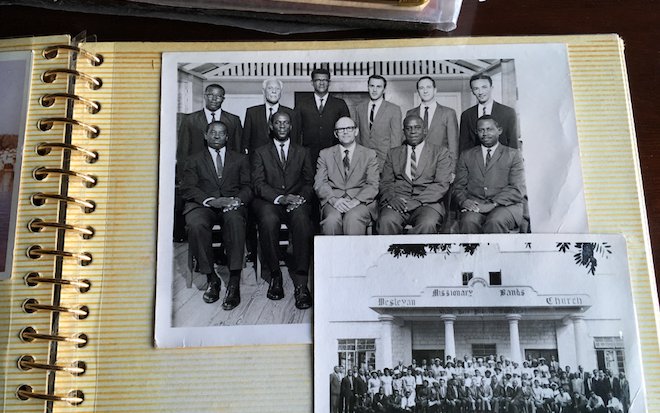 Editor’s note: Daniel M. Hyde is the former district superintendent, Leeds, Middlesex Parish, Jamaica, W.I. He and his wife, Nadeen, left their pastorate in College Park, Maryland, to serve in Jamaica in August, 1970. The couple helped re-divide the district in Jamaica and set up two national supervised districts by January, 1973. They moved back to the U.S. soon after with their three children: Nathan, Danelle, and Susan. Nadeen passed away of leukemia in 1976. Rev. Hyde currently resides in Huntsville, Ala., where he has pastored alongside his wife, Claudia. He has served as wing chaplain for the Civil Air Patrol in north Alabama and enjoys talking about his time as a missionary both in Jamaica and Guyana, South America.

On the south central coast of Jamaica, the Rev. King, my assistant district superintendent of Jamaica, suggested that we needed so start a church at Leeds, Jamaica. Rev. King was pastoring our church at May Pen. This church was medium size in facility and attendance and had a large day school.

My family and the rest of the missionaries assigned to Jamaica lived on the southwestern part of Jamaica, Westmoreland Parish, in which was located the Torrington Township Bible School campus.

A few weeks later, I scheduled an afternoon two-hour trip with a Bible school assistant over to the Leeds community to survey for a possible church start up. By the leadings of the Lord, I found myself preaching a short sermon that evening on a narrow elevated porch of a store building after we sang a song. It was a bit of an awkward experience, yet a number of the township people gathered in the street to hear what was going on. It was apparent the community needed a church.

Sometime later, I was back over to visit at Leeds and passed by a medical clinic. So I stopped and went up to an outside dispensing window. A gentleman stepped to the window and asked if he could help. It was a Jamaican medical doctor, Dr. Wilson, and beside him stood his wife. During our conversation, I had found that they had been members of our denomination and that he had earlier felt a call to preach, but instead went to medical school. His wife was a registered nurse. Can you imagine! They were interested in assisting to start a church a Leeds?

From there I went back to our Bible school president at Torrington to see if the Bible school would like to take on the project to assist in the Leeds church start. It became an immediate Bible school project with singers and students preparing for the ministry. A church was organized, and, would you know, that Dr. Wilson later became the Leeds, Middlesex Parish, Jamaica, W.I. church pastor.

A few years later, Dr. and Mrs. Wilson were called to pastor one of our New York area churches. Isn’t it true that God never forgets those whom he calls?

Dr. Hyde is pictured in the back row, second from right.