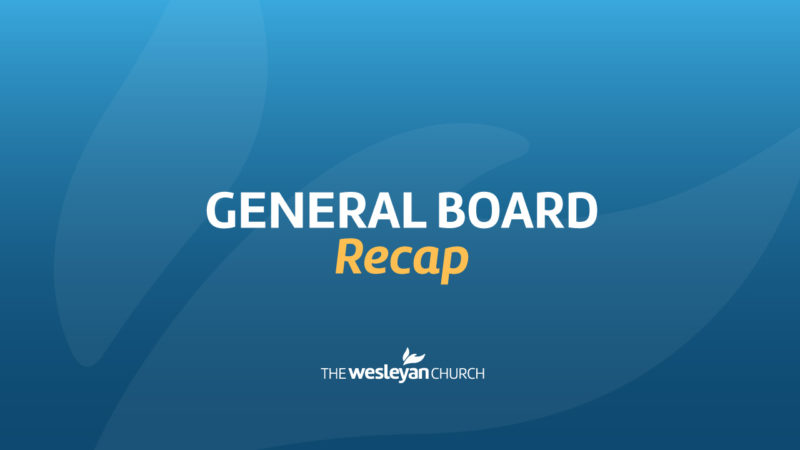 General Board gathers for 144th session

Final preparations for 14th General Conference were the focus of the March 2022 General Board meeting.

The Wesleyan Church General Board met March 15 and 16, 2022, for its 144th session. This meeting was the final opportunity for board members to review memorials in preparation for General Conference May 22-25 as directed in “The Discipline,” paragraph 1565.

Pastor Arlynn presented, “What Breaks God’s Heart,” challenging board members to intentionally seek to intercede for those things and people in our community that break the heart of God, stressing that serving our community is the way to expand the kingdom of God.

Dr. Wright shared a devotional on the relevance of holiness in the midst of cultural and social revolutions based on Jeremiah 6:16, asking what it looks like if we don’t grasp for control but seek to be filled and lead by the Spirit?

General Superintendent Wayne Schmidt during opening comments of his board report honored District Superintendent Mark Eckart, who died unexpectedly February 27. Dr. Eckart, who led the Indiana South District from 2003 to 2022, was known for his love for his family, his district and his God. The board paused to reflect on his life well-lived.

In addition to providing updates on Exponential and the Wesleyan Holiness Women Clergy Conference, Dr. Schmidt called board members to intentionally pray for General Conference, to pray on offense, joining with the Holy Spirit during prayer, which is vital for The Wesleyan Church (TWC) to become a Kingdom Force Unleashed.

He also highlighted the growing Hispanic population in the United States broadly and TWC specifically. Noting the fact that 20% of the U.S. population is Hispanic and referencing the emerging TWC Hispanic Connectional Movement, Dr. Schmidt shared the intentional partnership of the general church, district superintendents and Hispanic church leaders.

After prayerful exploration and general church, district and local church conversations, the General Board voted to authorize the intent to dissolve the Distrito Hispano Suroeste (DHS). This decision will allow DHS churches and pastors to join an established, multiethnic district expanding relationships and in hopes of accelerating the mission of reaching the significant Hispanic population of the U.S. for Christ.

The last action of the General Board, while in executive session, was to nominate general officer candidates for the next quadrennium. Recommendations for nominations were submitted by General Superintendent Schmidt.

Incumbent general officers Anita Eastlack (Church Multiplication and Discipleship), Dennis Jackson (Global Partners) and Janelle Vernon (Communication and Administration) were nominated for reelection during the 14th General Conference to their current posts. The Wesleyan Church’s Director of Spanish Ministry Education and Formation Johanna Rugh was nominated for election as executive director of the Education and Clergy Development (ECD) Division.

Rev. Rugh was nominated after it was shared that following a season of prayerful consideration and discernment, ECD’s current executive director, Russ Gunsalus, did not sense God’s direction and peace to serve for another term.

Dr. Schmidt stated, “Russ takes great joy in investing in present and future leaders. … it has been a theme throughout his life and ministry. His ministry partnership with Johanna Rugh these past few years in the work of Education and Clergy Development is a contributing factor to my recommendation and the General Board’s nomination of her as ECD’s executive director if elected at General Conference 2022.”

General Officer Kevin Batman continues as TWC’s general treasurer/chief financial officer. His current term expires in 2024. This role is filled by the General Board as provided in “The Discipline.”