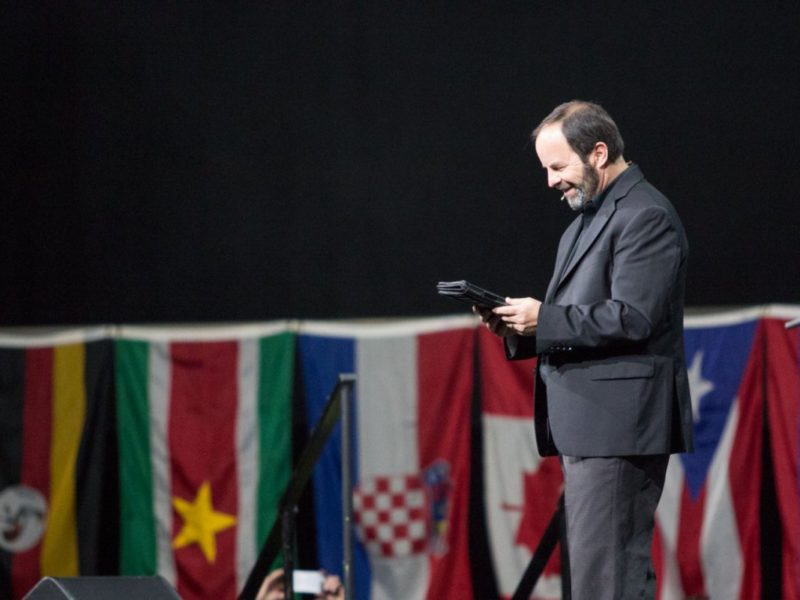 "We don't just want a few. We want them all to come to Jesus," said Dennis Jackson. Read more of what God is doing among the nations through Global Partners and its vision for the future.

“We don’t just want a few. We want them all to come to Jesus.” Preaching from Acts 1:8, he reviewed the whole world region by region, highlighting inspirational stories, the significant challenges, and some of the great “God-moments” when the Lord simply took over.

Global Partners, the world missions arm of the North American General Conference, now has ministry in 103 countries. This compares with about 35 countries 25 years ago. Much of the expansion to new countries has been the result of missionaries being sent by former mission fields. For example, the recent tripling of the African work from seven countries to 21 countries has been without the addition of any North American missionaries. The churches in Africa have joined the missionary force. The same has been true of most of our established churches around the world. The flags and names of each country/mission field were featured on the jumbo screen while the music built ( see flag video). Missionaries were recognized throughout the rally for the work they are doing in their particular countries.

On behalf of Global Partners Dr. Jackson expressed heartfelt thanks to the whole Church for focused prayer, growing financial support, and ever-growing participation in the global mission of the church. Many missionaries appeared on the screen in a moving video series, holding cardboard signs of specific thanks. Examples:

In the next four years, Global Partners hopes to double the global missionary force and open ministries in 20 more countries. The presence of missionaries is especially important in countries where the church is non-existent or where people are severely persecuted for knowing Jesus—such as one woman who was beaten regularly by her brother for four years because of her faith. Many Wesleyan missionaries are now serving in cities of up to 150,000 people where there are no churches of any kind.

Dr. Jackson passionately unfolded the scriptural teaching that reaching the nations as well as reaching our neighbors in North America is a “both/and.” He raised into the air a huge “&” sign.

There was a special moment featuring the JESUS Film Partnership. Four years ago at the 2012 General Conference in Lexington, Ky., the church was challenged to support 30 JESUS film teams around the world and help plant 300 new churches as a result. Dr. Jackson reported, to thunderous ovation, that 46 JESUS film teams were launched and 482 new churches have been planted! The film was shown to over 1.5 million people in just the last four years, and almost half-a-million people made decisions for Christ as a result. (See powerful 2-minute video here.)

John Connor, the previous JESUS film project director for 10 years, and the current director John Croft were honored with special awards in the form of “clapper boards.” Dr. Jackson affectionately addressed these globe-trotters together as “JC-squared.”

Because of the missionary summit that was held at nearby Houghton College the week before General Conference, up to 346 missionaries, national leaders, and family members are present at General Conference. Most of them were scattered throughout the crowd of 1,600-1,800 on Sunday morning. During the service, they stood and those nearby prayed for each one. Everyone in the crowd received a Global Partners prayer lapel pin, as the importance of prayer for all of God’s work was reinforced. 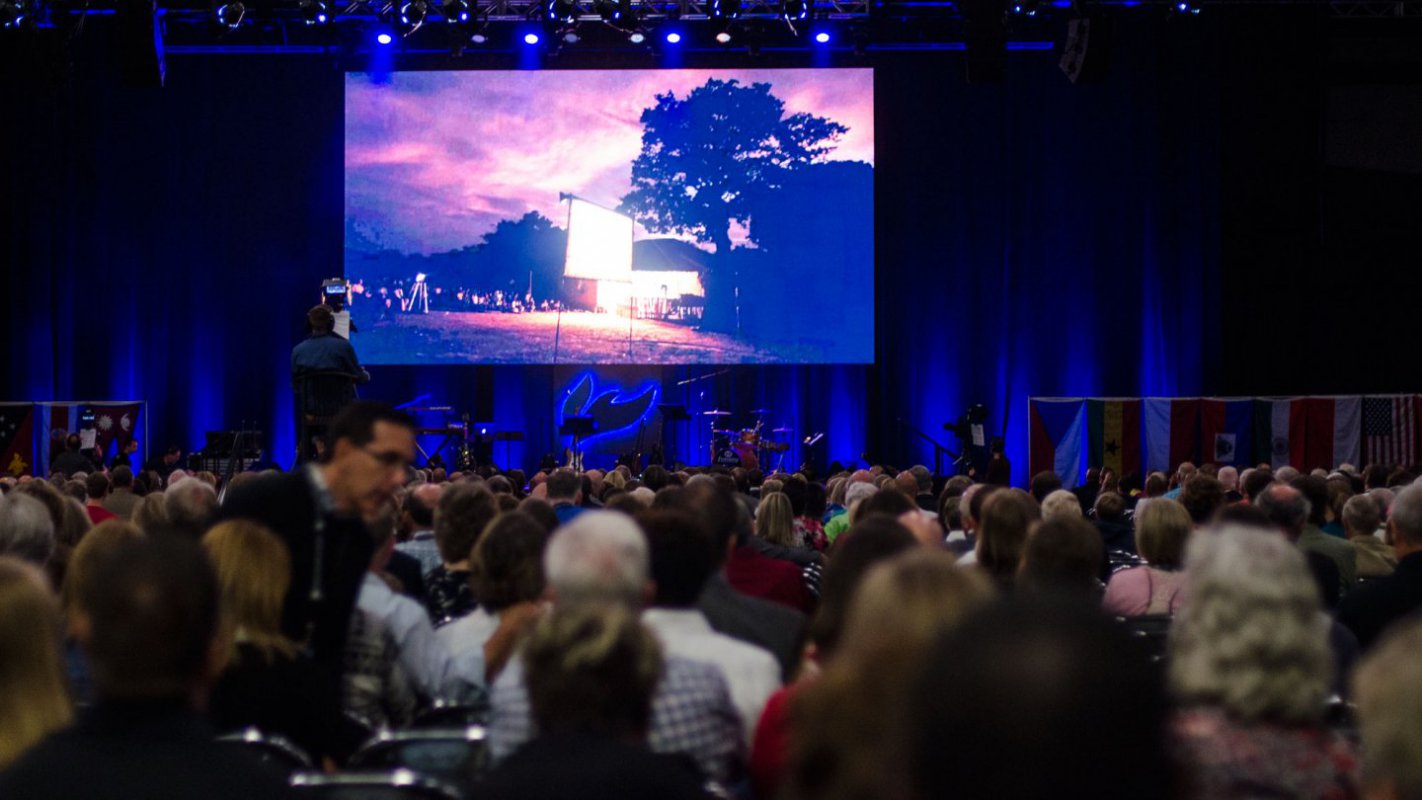 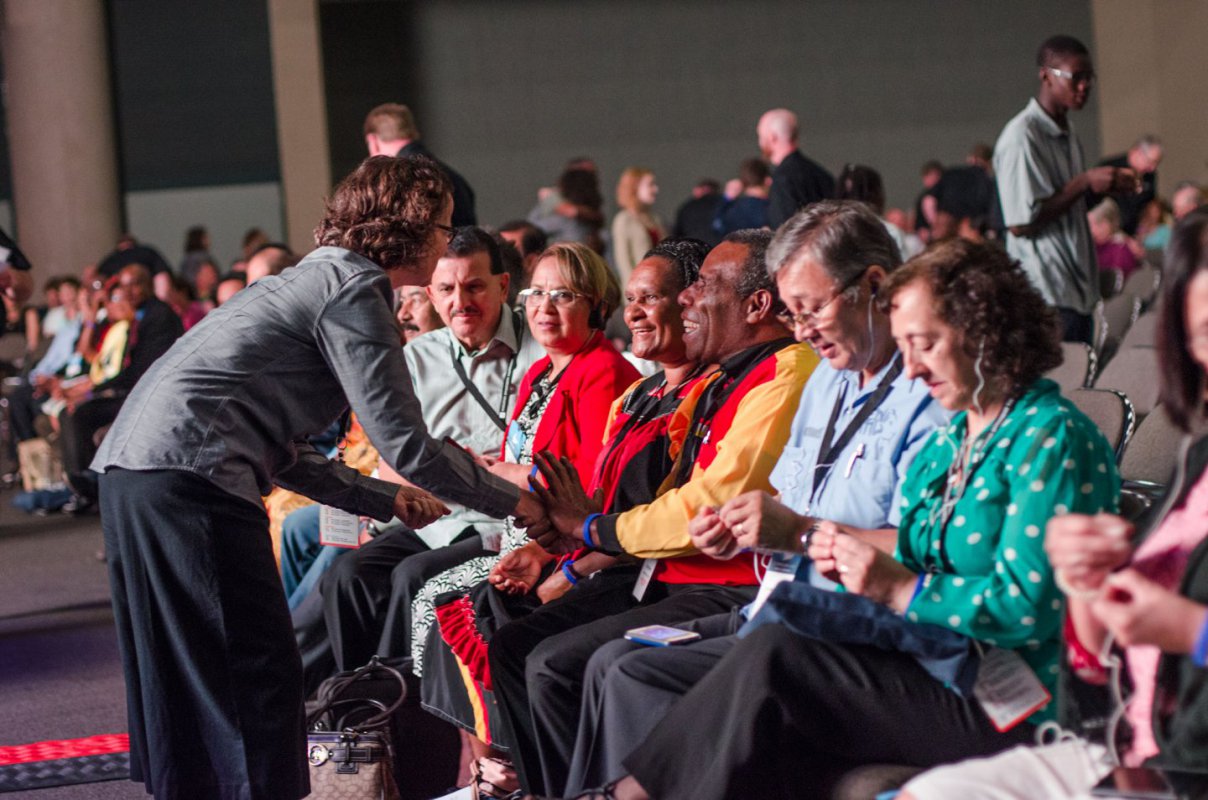 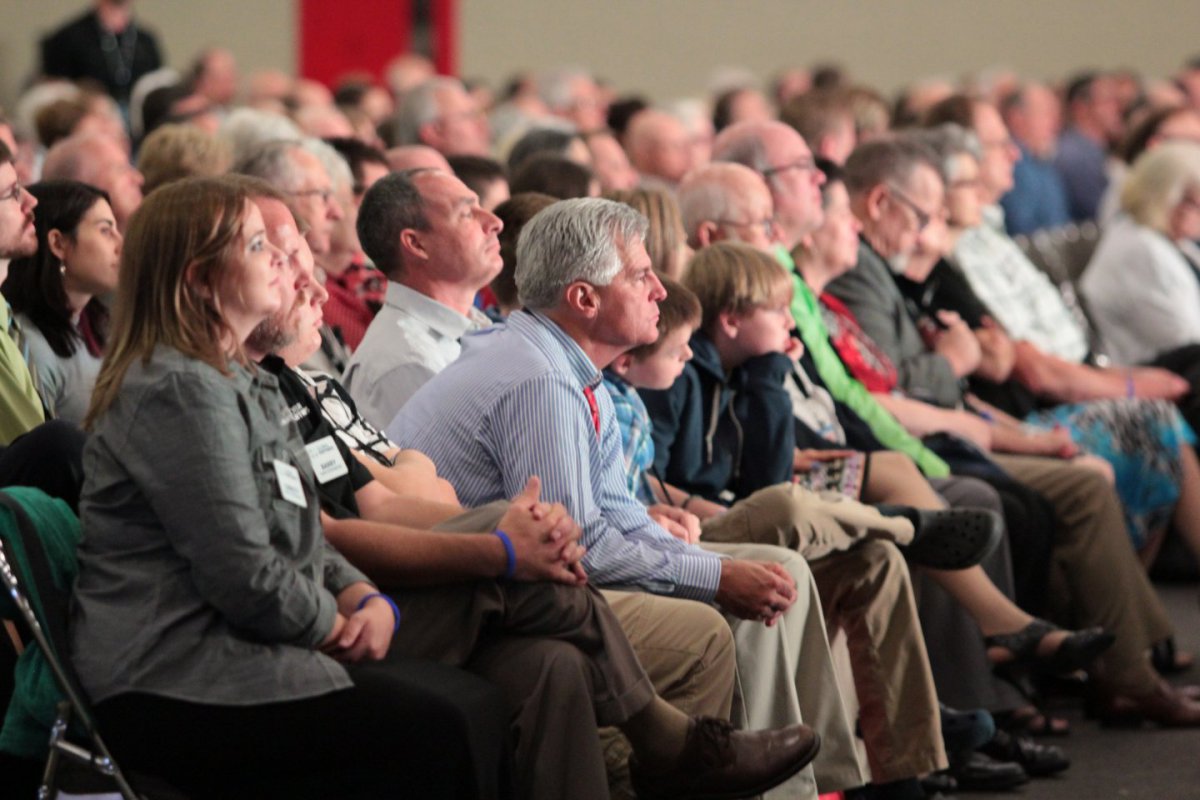 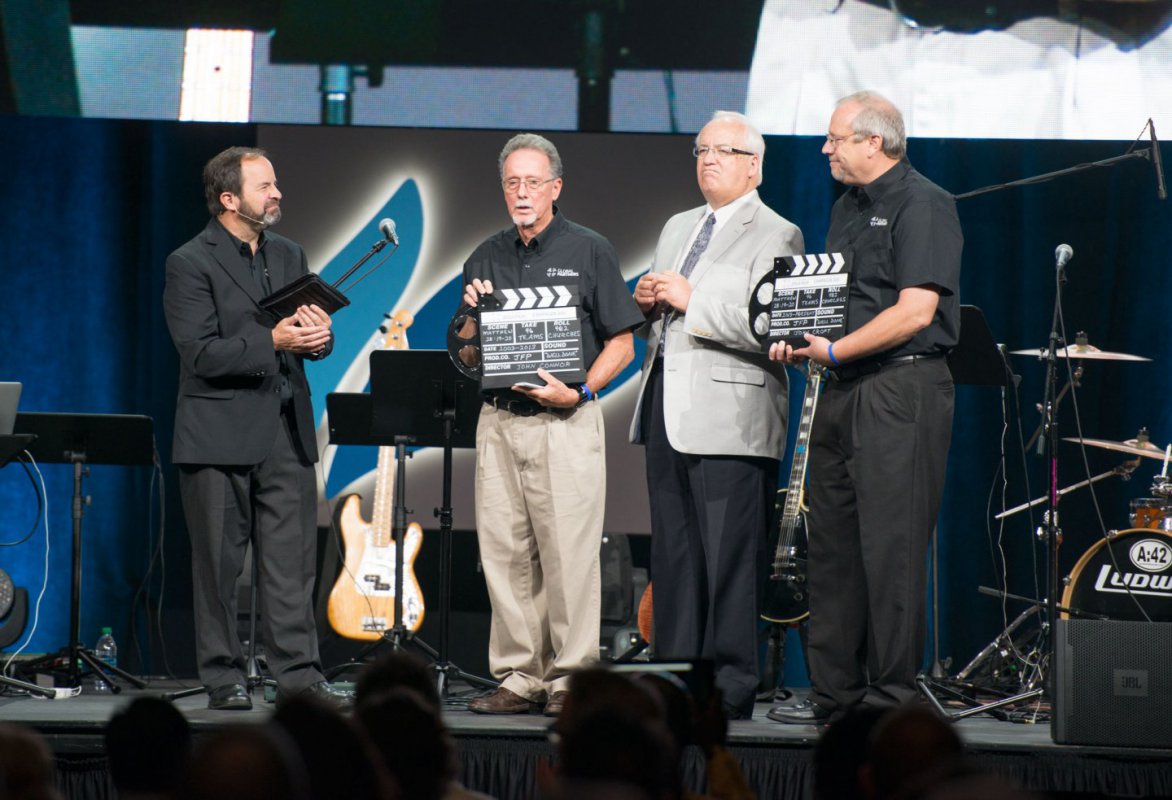 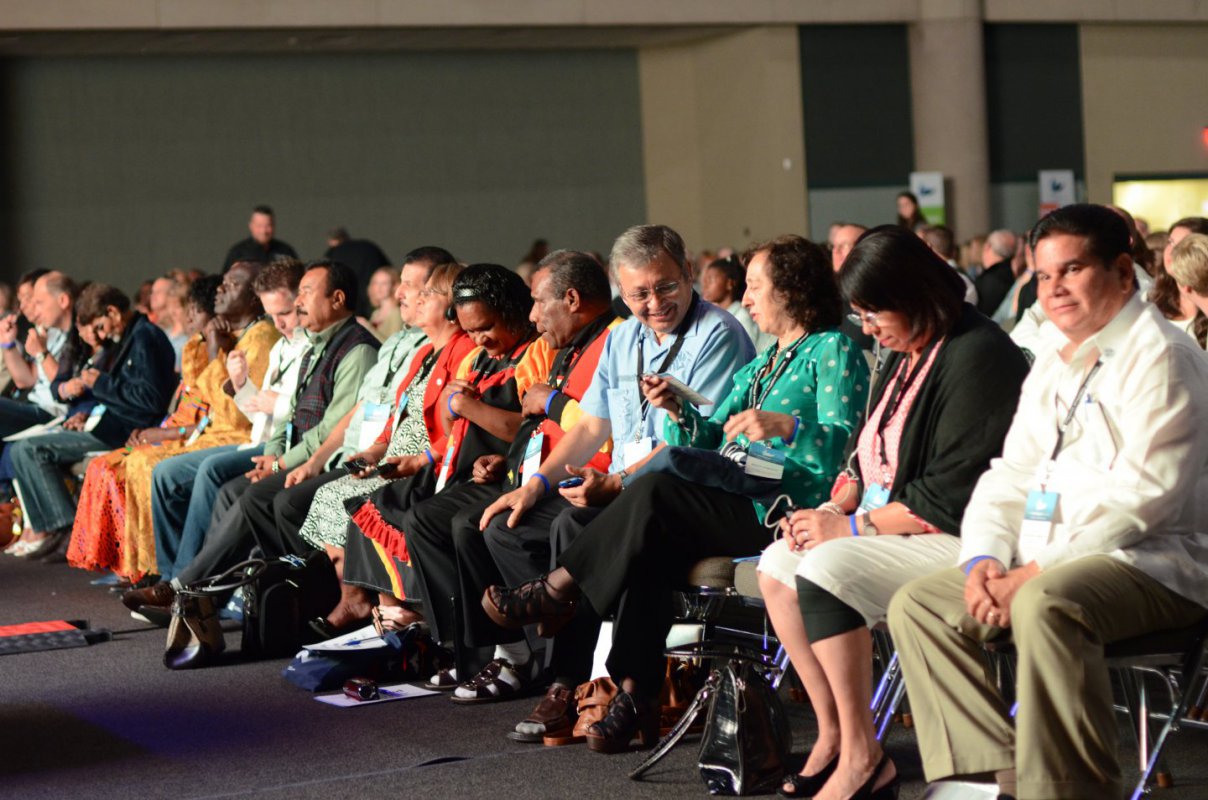 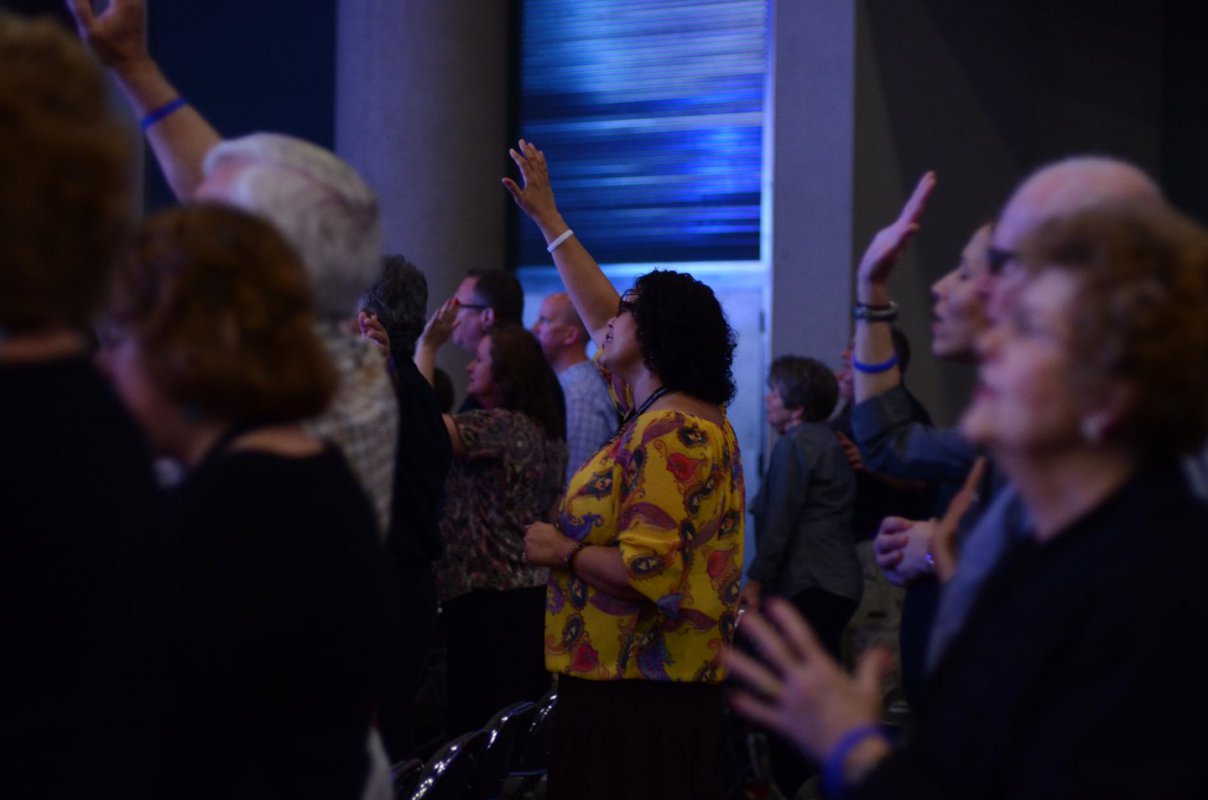