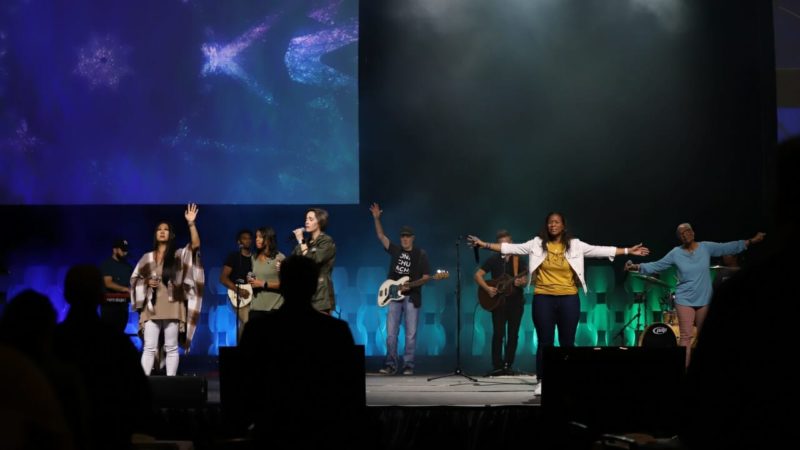 Having ears to hear the call

General Conference’s Tuesday evening of worship invites Wesleyans to listen to God and consider their call to be a Kingdom Force Unleashed.

As General Conference begins to wind down, attendees gathered again for a worship service Tuesday evening. Centered around a response to God’s calling with three different types of commitments highlighted, attendees were asked to consider becoming unleashed to ministry as a pastor, to missions as a missionary or to become a marketplace multiplier.

Johanna Rugh, director of Spanish Ministry Education and Formation, opened the service explaining that the intention for the evening was to take a moment and evaluate the ways in which individuals have received the call to be a Kingdom Force Unleashed. There were three main speakers and three testimonies to guide everyone through these types of commitments. 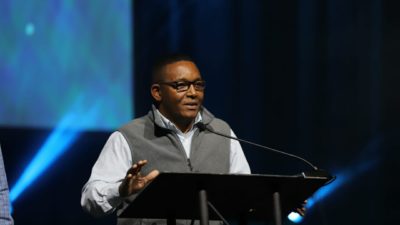 To start things off, Rev. Jervie Windom of the Mountain Plains District spoke about growing up under the influence of his grandmother and her pastor. Rev. Windom received the call to become a pastor at a very young age through his grandmother’s pastor, though it would take a significant life event before he started in that direction.

After an attempt to end his own life at the age of 15, he found himself giving his heart to God at the house of a prayer warrior who led him to faith three years later. Fast forward 35 years, he is a church planter in the Greater Houston area, speaking life into those around him.

Following Rev. Windom’s testimony, Kerensa McFrederick, a Global Partners missionary in the Czech Republic spoke about her call to missions. She grew up hearing stories of her great aunt Betty’s 33 years of mission work in Sierra Leone and Zambia. Because of this exposure and because of a call on her own life, Kerensa has been serving in one of the top three atheistic countries of the world for 17 years and counting.

Kerensa stated four in 10 people in our world still don’t have access to the gospel — and even in moments of feeling inadequate to serve such a big need, this doesn’t change God’s call and command. She then referenced a quote by Daniel Hahn which says, “It turns out inadequacy is our greatest gift, because dependency is our greatest achievement.”

“How will you and I reach the four in 10? We have to say ‘yes’ when God calls, and then we must depend on him,” she added.

Following Kerensa’s testimony, Carrie Whitcher of the Penn York District spoke on her experience as a Marketplace Multiplier. 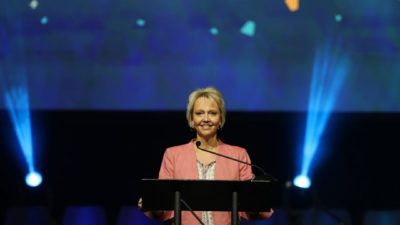 Carrie’s call to be a Marketplace Multiplier became clear after discussing leadership with her pastor. She said her pastor reminded her of her influence over the 200 people she serves 40+ hours a week in the healthcare field, while he has the influence and attention of churchgoers one hour a week in a church service.

“From that moment on I was on fire to learn more, to get more intentional in my daily work, to further connect, to engage my people in influential ways to emulate the hands and feet of Jesus,” Carrie said.

After this conversation, Carrie was able to start a Marketplace Multiplier chapter at her church, allowing the “church to leave the building.”

After hearing from Jervis, Kerensa, Carrie and others, General Superintendent Wayne Schmidt began to wrap up the service with a challenge. “I believe the call begins as we experience what Jesus and others often refer to as ‘having ears to hear.’”

This includes the calling on his own life, where his grandmother was the first to identify his call to become a pastor at a very young age. Dr. Schmidt stated he had a difficult time discerning if it was God or his grandmother placing this idea of becoming a pastor in his ear.

“But I came to that place of surrender in my call, and I recognized that it wasn’t God or grandma — it was God and grandma,” he explained. “That helped me to understand that God was calling me to vocational ministry.”

He added that maybe God is saying he wants to use attendees to deliver a calling to another person — to affirm what God has been leading that person toward.

From there, Dr. Schmidt invited individuals to reflect over response cards as a way to begin moving forward in those commitments. Under “I sensed the Holy Spirit asking me to take a next step forward,” they were invited to check “Ministry as a pastor,” “Missionary service to the unreached” or “Marketplace multipliers.” At the bottom of the card was a section for contact information so that someone would be able to follow up with them regarding this commitment.

Prayer partners were available throughout the auditorium to pray with attendees who felt a call on their own lives or a call to speak into the lives of others. After additional songs of worship, Johanna closed the service with a reading from Romans 8:28.

Following the service, Global Partners Executive Director Dennis Jackson said the team who planned the services has been praying on the idea of “the call” for a while now. He shared we oftentimes think of the call being just for pastors and maybe for missionaries, but the call is for everyone.

He noted that just as Dr. Schmidt said in his challenge, there’s also significant importance in inspiring individuals to affirm the call in others, to be bold in calling it out.

Jackson also said he had the chance to pray over international leaders who have called many into ministry. “It was a good service,” he said.

As the 14th General Conference comes to an end on Wednesday, there will be a communion service followed by a call to 50 days of prayer commitment.

Heather Auker is the communications supervisor for Global Partners.