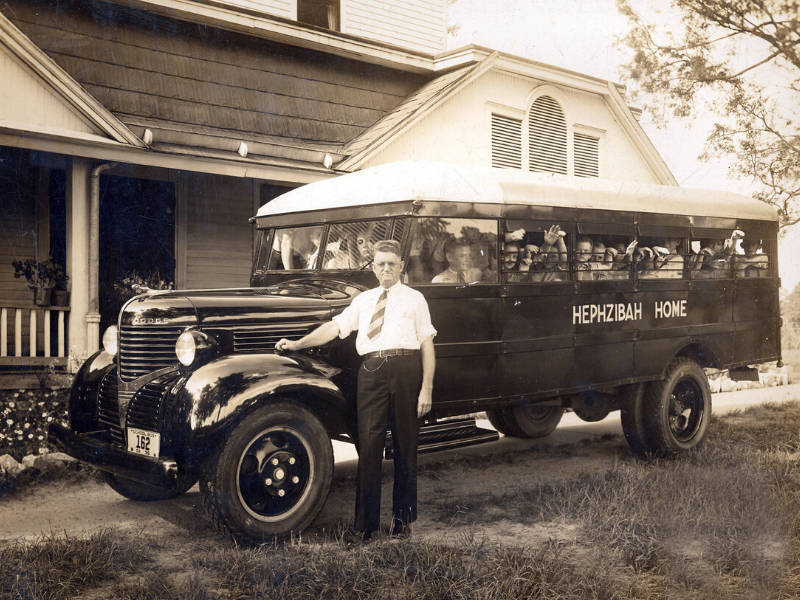 The story of the Hephzibah Orphanage began in January 1900 when Bettie Tyler and her sister, Mollie, took a leap of faith. The sisters moved into their dilapidated childhood farmhouse on 600 acres in Bolingbroke, Georgia, in order to care for four young boys entrusted to them by a relative. More orphaned children were added over the years, and others joined their work in caring for the children and farming the property.

Directing an orphanage was a constant test of faith, and when crisis after crisis drove Tyler to her knees, “… help would come in a way that proved unmistakably that God had heard and answered.” It was during those early days of testing that God revealed to Tyler the Hebrew name of her ministry, from Isaiah 62:4. “Hephzibah” means, “My delight is in her.”

Tyler continued to step out in stubborn faith and confidence in God, and God continued to provide through countless daily challenges – the provision of two more properties as the ministry grew and a devastating fire. Tyler finally settled her ministry on Forsyth Road in Macon, Georgia. During the years of Tyler’s leadership, over 500 children came under the loving care of her and her staff.

As Tyler’s personal ministry and life were nearing the end, God provided for the next step of the Hephzibah journey in 1922. It was then that Tyler administered the purchase of Hephzibah Orphanage by the Wesleyans for $5, along with their agreement to assume a $10,000 debt and take over the work of the ministry.

A letter written by Tyler at that time ends with a powerful challenge to the Wesleyans:

We feel this is only the beginning of Hephzibah’s prosperity. We feel that you Wesleyans are going to unite and make this a model Home, that you are going to labor and pray and sacrifice to that end. You shall have my prayers and cooperation as long as I live, and when I am dead I have an idea that I will come back as a ministering spirit.

Yours to do and dare and suffer for the orphans,

For over 70 years, the rich legacy of Hephzibah Orphanage/Children’s Home continued at the Forsyth Road property in Macon, Georgia, through the servant leadership and faithful efforts of many men and women.

In 1950, Edward Parker Buck, Sr., a former superintendent of Hephzibah recounted, “The testimony of Mrs. Lucile Ernest, who has been faithfully working with the Home since about 1900 is, ‘These days seem like the days when Aunt Bettie Tyler began here; God still blesses like He used to.’”

In 1984, a new 186-acre property was purchased on Zebulon Road, also in Macon. The enormous endeavor of funding, construction and relocation began under the leadership of Joe Neyman, and efforts in the 1980s focused on paying for the land and developing a master plan. Neyman resigned in 1992 after 22 years of faithful service and Dr. Larry Freels was chosen as the new director to lead Hephzibah into a new chapter.

Freels recounts, “My personal chapter in this chronicle began in the fall of 1993. I stood on the edge of the timbered 180-acre land to which Hephzibah Children’s Home purposed to relocate. The site was perfect. The plans were exciting. The cost was awesome. My personal sense of inadequacy was overwhelming. The assignment to lead in this massive project was frightening. I knew God had called me to this ministry and surely he would see me through. Yet, humanly, there was the temptation to recoil. ‘The task is too big for me.’ But the Lord …

“I have been reminded of Peter stepping out of the boat on the water. The miracle didn’t start while he was in the boat. It seemed I was in a boat with Peter. I stepped out of the boat … and the miracle began to happen. Almost immediately, God began a process of bringing the right person, at the exact time of need, with the precise skills to resolve a specific problem.”

After countless miracles and the efforts of over 2,000 volunteers, the relocation of Hephzibah Children’s Home was finalized in July of 1997. By the following year, the debt was paid.

For over two decades, vulnerable children and youth were cared for in a variety of ways through Hephzibah Children’s Home and Hephzibah Behavioral Health Services on the expansive Zebulon Road Property. Leaders, workers and volunteers from across the country sacrificially invested their prayers, finances, time and talents as they entrusted the outcomes of the children in Hephzibah’s care to God. It’s impossible to adequately describe or measure the impact of the immense amount of love poured out in the name of Christ through this special ministry and this special piece of property.

“On behalf of The Wesleyan Church, I commend the Hephzibah leaders for this bold move of faith,” said Dr. Wayne Schmidt, General Superintendent of The Wesleyan Church. “When considering Hephzibah’s history, one notes the many times and ways the ministry transitioned to meet emerging needs in changing regulatory environments. Throughout all the adjustments of all the years, Hephzibah’s mission to serve children and families remained steadfast. To continue to fulfill that mission is at the heart of the Hephzibah Board of Directors’ decision to re-vision. I am thankful for their faithfulness and excited about the future of Hephzibah Ministries.”

Many felt understandably grieved by the closing of Hephzibah Children’s Home, a ministry God had used to positively impact countless lives. It is not fully known why God allowed the situation to unfold as it did. But Wesleyans do not grieve as those without hope (1 Thessalonians 4:13). Necessary steps of obedience were taken, and not unlike earlier times in Hephzibah’s history a prayer-filled, multi-faceted, seemingly impossible process of transition began.

The sale of the Zebulon Road property had become necessary to retain the organization’s assets and enable the ministry of Hephzibah to continue. And it shouldn’t be surprising that God once again provided beyond all expectations.

The Zebulon Road property was purchased by the Rescue Mission of Middle Georgia on March 14, 2019. This special property and its facilities allow for expansion of the Rescue Mission’s vision originally given to Sergeant A.E. McGee in 1952, to proclaim and demonstrate to the vulnerable and hurting that “Jesus Cares!” Future plans include capacity to serve 200 men, women and children in the name of Christ.

With the funds released and invested from the property sale, God is clearly leading Hephzibah62:4 into a bright new future, where the new mission that came into clear view during the re-visioning process, equipping and mobilizing local Wesleyan churches to transform the lives of vulnerable children, has the potential to reach thousands of vulnerable children and families across North America. Many examples of the fruit of this new mission are already being revealed.

The ministry model has changed and expanded, but Hephzibah62:4 remains faithful to the vision and spirit of Hephzibah that God birthed in Bettie Tyler so many years ago and entrusted to the Wesleyans since 1922. God is still clearly leading and miraculously providing today through this important ministry, just as he did in the days of Bettie Tyler.

For information on how Hephzibah62:4 can help equip you and your church to engage in our new mission, visit hephzibah.org.

Pictured: D.L. Jones, former director of Hephzibah, is pictured with children from the home.