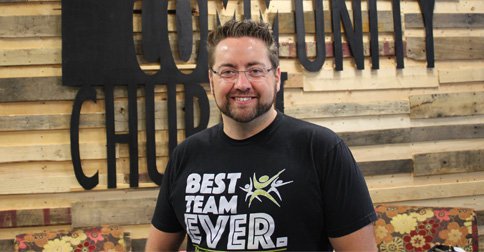 ​Houghton announces Fetter as Pastor of the Year

Rev. Andrew Fetter has been named the recipient of the 48th annual Claude A. Ries Pastor of the Year award.

Houghton College is pleased to announce Rev. Andrew Fetter as the recipient of the 48th annual Claude A. Ries Pastor of the Year award. This award is named for Dr. Claude Ries, who faithfully served as Houghton professor of Bible and theology for nearly 40 years as well as interim pastor of the Houghton Wesleyan Church.

Dr. Claude A. Ries was a high school teacher before coming to Houghton College and serving as a pastor in Seneca Falls, N.Y. At Houghton, he served as professor of English, professor of Hebrew and biblical literature, and eventually chairman of the Division of Theology and Christian Education.

“New York’s Capital Region is consistently listed as one of the most post-Christian regions in the nation, but Fusion has defied the odds,” said Dr. Steve Dunmire, director of ministry resources at Houghton College. “Fusion has experienced growth for seven consecutive years, averaged 14 percent growth per year, and just recently added a third worship service. Andrew Fetter is leading one of the most vibrant Wesleyan churches in the northeast and is an outstanding example of what ministry can look like in New York State and the northeast.”

Originally from Ohio, Rev. Fetter grew up in the church, and in junior high he began to form a personal relationship with God. In his words, “It changed my life.” He heeded the calling of the ministry in his early 20s and, after college, went on to be a youth pastor, young adult pastor, and worship pastor. He then became involved in a new church plant and relocated to Upstate New York as lead pastor of Fusion Community Church, where he lives with his wife, Kat, and their three girls.

“He is highly regarded in his church, his community, his district and his family,” said Rev. Paul James, district superintendent of the Central New York District. “Our team looks to him as our quarterback. He serves selflessly in making more disciples for Christ.”

Dr. Claude A. Ries became a vice president of Houghton College in 1956. While he was an impressive scholar, what really made him noteworthy was his example as a warm friend, committed follower of God, leader in the community, and spiritual role model for his students and colleagues. Nearly all who came in contact with Dr. Ries recognized his warm personality. Ever since 1968, the Claude A. Ries Pastor of the Year Award has been presented to a Wesleyan pastor who is a role model for other pastors and an exemplary shepherd.