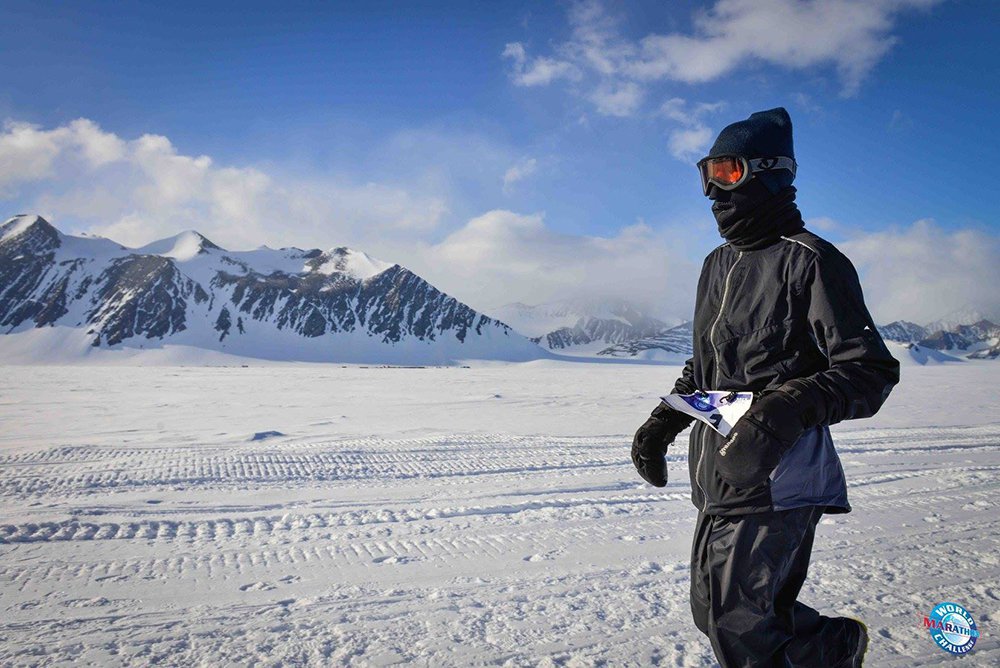 7 marathons on 7 continents? In seven days? At 66?? He's the only one who has ever done it. Our Houghton professor Glen Avery.

Imagine it. Seven marathons in seven days on seven continents, including Antarctica. At age 66. He’s a man who defies convention, striving to accomplish what no one has done. Glen Avery, informally known as Houghton College’s marathon man and a 1972 graduate of the college, balks at the traditional route for a retired technology librarian and professor emeritus, and instead forges one of his own.

In his case, that path has led to 85 marathons and 28 ultramarathons around the world since age 51, setting foot on each continent twice over. His latest venture tested his resolve and endurance as he took part in the World Marathon Challenge (WMC) to complete marathons on all seven continents in a week.

This time, however, Avery had seven days–only a single week to accomplish a goal that, for most of us, seems unattainable. For him, it’s another challenge in a life of adventure.

Moreover, he made history at age 66 by becoming the oldest person in the world to attempt–and complete–the WMC.

“It’s the kind of challenge where I thought ‘I want it to be hard enough so I had to really work for it, and I want to be able to say I did something just extraordinary but doable,'” Avery remarked about his motivation.

He approached the WMC with an unshakeable spirit and the vitality of someone half his age, carefully planning his training and daily recovery–the consummate marathon professional. To prepare his body and mind for the seven-race/seven-day trial, Avery completed 23 marathons this year. This included a four-marathon/four-day series at an altitude of 6,000 feet, as well as the seven-state Appalachian Series.

The WMC tests even the bravest of runners, covering just over 183 miles of ground in a mere 168 hours through a wide range of locations. In order to accomplish their task within time limits, participants took the Challenge’s chartered plane to each location. By the end of the trip, Avery and his fellow participants logged nearly 43,000 flight miles and a actually did it in 6½ days.

Antarctica, one of the world’s most unhospitable environments, hosted the first leg of the race, where more than 30 participants from over a dozen countries ran on Union Glacier at the mercy of the weather. Next they traveled to Punta Arenas, Chile (South America); Miami, Florida (North America); across the Atlantic to Madrid, Spain (Europe); Marrakech, Morocco (Africa); Dubai, United Arab Emirates (Asia); and finished up in Sydney, Australia, for the seventh and only night race of the challenge.

“The World Marathon Challenge was the ultimate energy allocation problem,” Avery remarked about his running strategy in environments ranging from the sub-freezing cold of Antarctica to the 100-degree heat in Dubai. “Those conditions forced me to pace myself and run smart.”

For him, though, the most impressive aspect of the race was the supportive network among the runners themselves, who would shout encouragement to each other as they crossed the finish line. “The camaraderie during this event was very intense. The main goal for the group was for everyone to finish the Challenge – no matter what their time. I feel blessed to have been part of this group of individuals possessing unique and fascinating stories.”

Two-time Olympian Ryan Hall, holder of the best-ever American times for the marathon and half-marathon, was amongst the participants. Hall and Avery may meet again at Hall’s elite running clinic at Houghton this June, which includes a clinic, 5K race, and keynote address and dinner. More information is available at www.houghton.edu/ryan-hall.

This isn’t Avery’s last hurrah, though, and he’s already on the lookout for a new adventure. Wherever his running takes him, he goes with determination, humility, and excitement for defying what seems impossible.