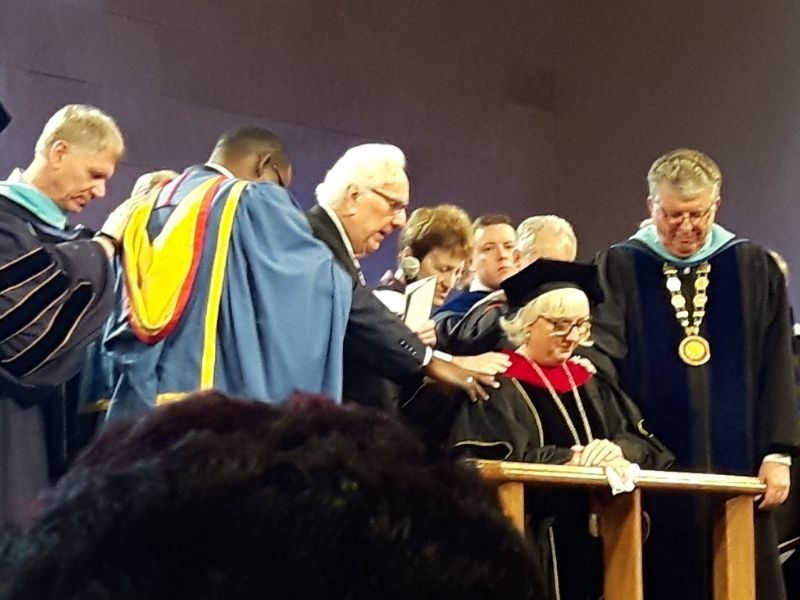 I called him Dad

The true legacy of the life and ministry of Earle L. Wilson are the people who called him pastor, president, general and dad.

Some knew him as pastor.

He was the man who knocked on their door to invite them to church. The one who married them, buried their parents and dedicated their babies. He knew their heartbreaks and heartaches, their failings and temptations, their joys and sorrows. These are the people who he prayed over and for every week by name.

There are those who experienced the power of his messages multiple times a week, week after week for years. They saw him as an extended member of their family, their counselor and spiritual guide. He attended their family picnics and visited their hospital rooms. He met with them on the ballfield, dinner table and office. He knew them as a shepherd knows his sheep. He was their pastor.

Many knew him as president.

He was their spiritual leader who recruited them, believed in them, held them accountable and wouldn’t let them quit. With his weekly chapel sermons, he challenged them to bravely pursue the Lord’s call to vocational ministry. Through his years at United Wesleyan College in Allentown, Pennsylvania, he was the pastor to future pastors, professor of Greek and Hebrew to budding scholars, exemplar to the young preachers, administrator, student recruiter and fundraiser.

He inspired the students, faculty, staff and board to dream bigger dreams for themselves, for the church and for the school. He was a scholar in his own right. He had command of the biblical languages. He was a theologian and church historian who mastered the art of preaching. He led them to think deeper and believe deeper. He was their president.

Most knew him as general.

The longest serving General Superintendent of The Wesleyan Church, he was the one who set the vision, charted the course, called to action and reminded us what it means to be Wesleyan. He ordained our ministers, dedicated our churches, preached our revivals and camp meetings, chaired our general boards and general conferences, and delivered the “state of the denomination” address. He believed in holiness, the assurance of the believer, the power of the cross, the authority of Scripture and the promise of life eternal.

He loved The Wesleyan Church. He believed deeply in her unique role and purpose in the larger Church. He gave most of his life for her — he was her son, her father and her grandfather. He was the church’s leader, pulpiteer extraordinaire, ambassador, advocate and anchor.

At just 37, he was elected president of United Wesleyan College. And at age 49, he was elected General Superintendent. He traveled the globe with my mom, Sylvia, his life and ministry partner, for 24 years. Together, they represented, served and led the denomination. It is no exaggeration to say he gave his life to The Wesleyan Church. He was their General.

To Debbie, Stephen and me, he was dad. Later, Steve, Rebecca and Wayne, our spouses, also called him dad. To our children, he wasn’t pastor, president or general, but grandpa. He sometimes missed school recitals and sporting events, holidays or family dinners. He was ours to share. Everything was public and nothing was ever truly private. Most conversations, vacations and decisions were about the church. It was his calling to fulfill.

But there were moments when he was just ours. The dad who embarrassed you in front of your friends and the dad who stood up for you to right a wrong and to defend. With his imposing stature, he took command of every room just by his presence and his booming voice. His snow-white hair caused him to stand out in a crowd. We were expected to finish anything we started. Excellence was expected in all things. And we never forgot that what we did and how we lived was a testimony to the God we served.

We were expected to finish anything we started. Excellence was expected in all things. And we never forgot that what we did and how we lived was a testimony to the God we served. He was proud of the name “Wilson.” The name represented something valuable to him — the heritage of the faithful who had come before us. And the name was expected to mean something to us too.

He was the dad who loved to ride the waves and held tightly to my hand so I could make it over even the biggest ones. The waves on the Jersey Shore were daunting as a child, but I could conquer them with my hand in his. And through the waves of life and family and work and service, I always knew his hand was close by. His hand was always at the ready to affirm, to encourage, to support and give a boost over the biggest waves that life sent.

He baptized me, married me, ordained me and prayed over me daily. He was my counselor, my champion, my conscience and my confidence giver. Even with white hair and grandchildren of my own, I was his little girl. And he was my dad.

The true legacy of the life and ministry of Earle L. Wilson are the people who called him pastor, president, general and dad.