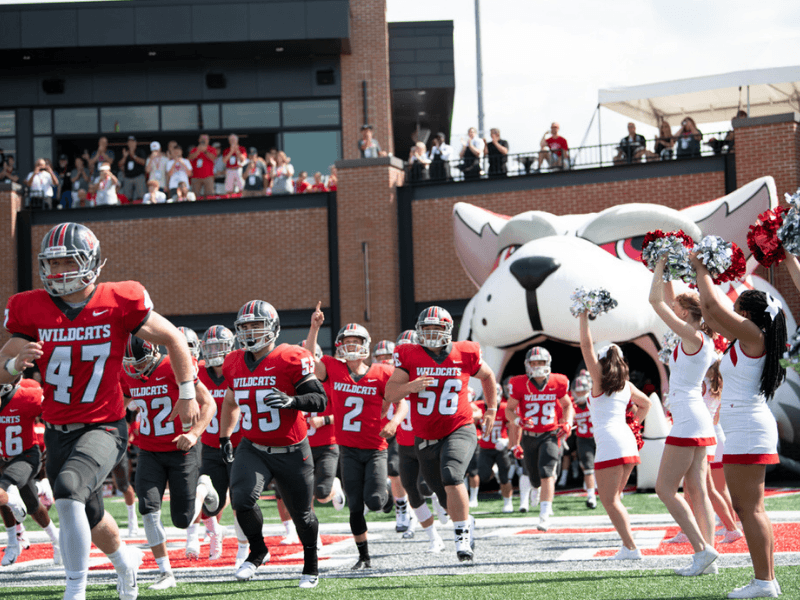 The Indiana Wesleyan University Wildcats packed out its football stadium in the program's inaugural game.

Indiana Wesleyan University football played its long-anticipated first game in program history on Saturday, Sept. 1, vs. Taylor University. Over 6,000 fans packed Wildcat Stadium for the sold-out inaugural game. IWU led by 14 points in the first quarter and had a drive stall deep in Taylor territory trailing by five with six minutes to go. Taylor scored a late touchdown and won 43-31.

The day began at 11:30 a.m. with tailgating across from Wildcat Stadium. Shortly before kick-off, spectators observed pre-game ceremonies, which included three skydivers descending on the field to deliver the game ball, the national anthem, a fly over and the coin flip. The game officially began at 4:00 p.m. with kickoff.

“IWU’s very first intercollegiate football game was a fantastic event, full of energy, fun and fellowship,” said Dr. David Wright, IWU president. “It is a day we will always remember. Most of all, we’re grateful for the chance to prepare over 100 football players to be IWU world changers. They’re going to be fun to watch on the field, in chapel and in the classroom as they mature into leaders.”

“We are very excited about the direction of IWU football,” said Head Coach Jordan Langs. “As a program playing in its first full season, our players are consistently being faced with new challenges and experiences and how they have decided to learn and grow through these experiences has been exciting to see.”

IWU is an associate member of the Mid-State Football Association (MSFA) and plays six association members. Those games are not part of the conference slate. Besides the season opener against Taylor, IWU plays home games vs. MSFA members Lindenwood-Belleville (Ill.) and Saint Francis (Ill.) on Homecoming. IWU travels to MSFA members Siena Heights (Mich.), Olivet Nazarene (Ill.) and Concordia (Mich.), who finished No. 15 in the 2017 national polls.