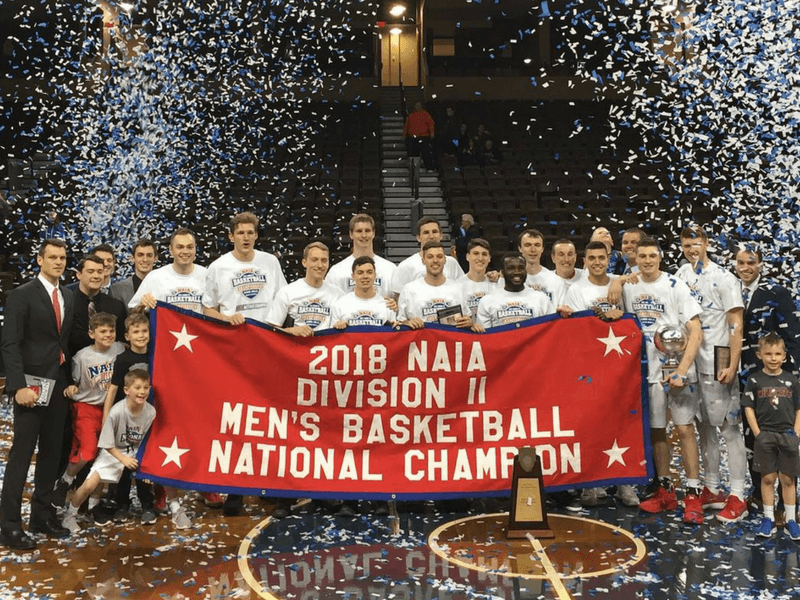 The team may be on top of the NAIA, but they still carry an "I am third" mentality.

The Indiana Wesleyan University men’s basketball team captured the 2018 National Association of Intercollegiate Athletics (NAIA) Division II National Championship on Tuesday, March 13, with an 84-71 victory over University of Saint Francis (Indiana). The red banner championship is the third in the past five years for the Wildcats, which is tied for the most in NAIA Division II history. IWU also took home the title in 2014 and 2016.

“It is not something I really thought would happen,” said Head Coach Greg Tonagel when asked about winning three titles in five years. “It is hard to put it into words right now.”

Tonagel began his IWU career in 2005 and is known for instilling an “I Am Third” culture into his team, which focuses on putting God first, others second and self third.

“If you want to be first, first find a way to be third,” said Tonagel. “We are trying to create ‘I Am Third’ leaders; men who will eventually leave our programs and be ‘I Am Third’ in their homes, communities and workplaces.”

Freshman Kyle Mangas of Warsaw, Indiana, was named Tournament Most Valuable Player. Mangas was also named to the All-Tournament Team, along with junior Evan Maxwell of Clarks Summit, Pennsylvania. Senior Ben Carlson of Palatine, Illinois, was recognized with the Hustle Award. Tonagel was honored with his third NABC/NAIA DII National Coach of the Year.