IWU’s “Elephant Project” to help train 260,000 teachers in the Congo

In partnership with other universities and seminaries, Indiana Wesleyan will help train 260,000 teaches in the Congo as part of the "Elephant Project."

“Our team got the shock of its life,” said team member Dr. Brad Oliver, IWU associate professor of education, School of Educational Leadership. “We looked up from eating in the hotel cafe and found ourselves on the national news. Millions of Congolese in Kinshasa are now aware of the Elephant Project.”

This three-year-old initiative is designed to train Christian primary and secondary school teachers in Congo on the proper way to integrate faith with education. Faculty from the partner universities serve as facilitators. The initial goal is to train 260,000 teachers serving 5.8 million children from all levels of society. The first two years were spent carefully developing the conceptual framework that would be used to develop teacher training materials, followed by the creation and translation of the materials themselves. Then a core group of Congolese educators were chosen from 24 pilot schools. Approximately 95 Congolese teachers are currently being trained by the project’s University partners; these teachers will then become the trainers for other Congolese teachers.

The concept for the Elephant Project came into being in June 2011, when Oliver attended an International Christian Education symposium in Australia. There he met Bishop Isadore Nyamuke, National Vice-President of the Church of Christ in Congo, who was looking for a Christian university in the United States to assist his vision for retraining teachers in Congo. After the session, Oliver approached Nyamuke. “I thought I might be able to offer some assistance with a school or two, but in talking with Bishop Nyamuke, I soon learned he was responsible for some 18,500 Protestant church schools in the DCR, schools led by 260,000 teachers. The Bishop was thinking in much grander terms than I was. He had a vision to retrain the teachers of DRC to teach through a biblical worldview. I was stunned by the size of the task.”

The DRC’s national educational service is extremely fragile, failing to meet the basic educational needs of Congolese children and young people. Without immediate education intervention, the DRC’s national stability is significantly threatened. “We believe we have a global imperative to offer help when we see it,” Oliver said. “Even though it’s a huge country, and even though there’s a number of colleges there . . . none of those universities prepare teachers through a Christian worldview.”

The penultimate goal is to make the Elephant Project a completely Congolese-run initiative. The ultimate dream for the project takes it far beyond the borders of one nation. “Geographically, when you look at a map, Congo is what’s called the heart of Africa, and everything wraps around Congo,” Oliver said. “So it’s in a desired geographical position, but more importantly, we really believe God has put Bishop Nyamuke in the position of influence that he’s in. He’s had a clear vision for Christian education as a way to transform not just Congo, but the entire continent, and he’s a man who carries the kind of weight and stature in Africa to make that happen.” 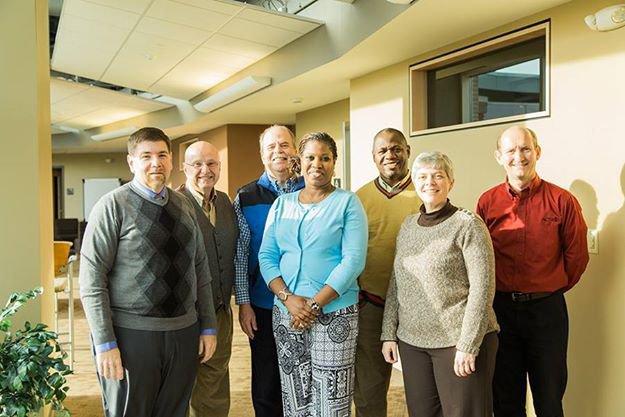 Congolese educators attending worship. Each day, Congolese church school educators would gather in a large lecture hall to worship prior to going to class for educator training. All classes where held at UPC – the Protestant University of Congo.