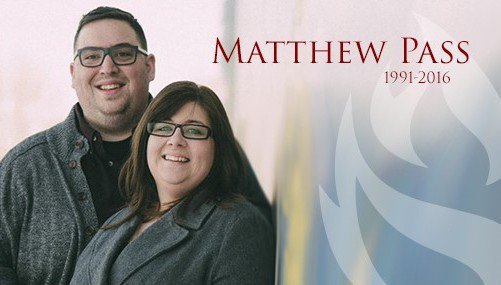 Kingswood student dies in his sleep

The fourth-year student was serving as summer intern with The Wesleyan Church Headquarters in Indianapolis, Indiana. His wife, Gabrielle Hatfield-Pass, had remained in New Brunswick to finish her teaching at Sussex Christian School. She was going to join Matt later in June. Matt was sharing a house in Marion, Indiana with his friend and fellow classmate, Ryan Genereaux, who is in the same internship program.

Matt was an honour student in the pastoral ministry program and a Buckingham Leadership Scholar of 2013-2014. This past year he served on the student council as a representative for off campus students. He was a student assistant to Dr. Laurel Buckingham, providing social media assistance for the Buckingham Leadership Institute. Matt also worked with the Enrolment Department, giving future students information about Kingswood, showing them around campus, and introducing them to staff and students. He was one of the first friendly faces they met on campus.

Matt’s internship work was attached to the General Superintendent’s office at Wesleyan Headquarters. Some of the results of his excellent media work will be seen at General Conference in a few days.

We ask that you join us in prayer for Matt’s family and classmates as we grieve his passing. His parents, Bradley and Laurie Pass, serve with Pentecostal Assemblies of Canada, pastoring at Island Gospel Tabernacle in Clam Point, Nova Scotia. His brother, Benjamin, who is married to Laverne, is also a student at Kingswood. His sister, Alannah Pang-Pass, graduated this year (2016) and married KU grad Isaac Pang (2014).

May Christ be glorified as He comforts and ministers to the hearts of the people Matthew loved and served.