As Michaela was growing in her “seeing” of spiritual realities, SWU was giving her plenty of opportunities to develop leadership and discover her calling.

Michaela Wickham was in her second year at Southern Wesleyan University (SWU) when she had to miss the division of religion’s annual weekend retreat. The reason was poignant: her parents were getting divorced. Wickham went home to Columbia, South Carolina, to be with her younger brother.

Friday evening, Wickham’s phone rang. On the line were her classmates at the retreat, asking if they could pray all together for her over the phone.

Wickham said the love she felt in that moment “changed the game.”

“My people, who cared about me, cared for me. The community came around me when I was completely broken. They took the time to be with me and to be for me,” she said.

Wickham came to SWU as a softball player. She said the intentionality of SWU students and staff started before she arrived, when her admissions counselor showed up at her high school, two and a half hours away, asking for her by name to give her a gift.

Entering the religion department, Wickham learned more than theology. She described the professors and students in her division as “people who not only know the Bible well, but people who know people well.”

One of the professors most formative to Wickham’s education was Bob Black, who recently retired from teaching in the religion department. Wickham said she used to write “Bible puns” on Black’s white board, to which he would reply with more puns.

“He loved us in the way he engaged with us. In the way he talked too, he taught with a passion that flowed from his heart,” Wickham said.

That kind of passion wasn’t confined to the religion department, Wickham said. During her senior year, she found herself in an organismal biology class to satisfy a general education requirement. The professor was an environmental scientist with a clear passion for his field.

Wickham was not only receiving care and inspiration at SWU. She was also honing her own skills of “knowing people.”

When Wickham was an underclassman, Rev. Mark Wilson, who later joined SWU’s religion department faculty, spoke in one of her classes by way of video. Wilson recalled that the day of the video conference call came during a particularly discouraging time, right before he was to preside over a funeral.

“At the end of the class, professor (Dave) Tolan called on Michaela and asked if she would pray for me,” Wilson said. “The prayer was so anointed. I could feel the power of God lifting me up and encouraging me.”

“Michaela is a prayer warrior. She sees. She sees things before others see them,” he said.

As Michaela was growing in her “seeing” of spiritual realities, SWU was giving her plenty of opportunities to develop leadership and discover her calling.

She began to feel called to itinerant ministry, to do more than just traveling and speaking, but “sitting across the table from people,” as she called it. She began speaking to her peers in her classes and on her softball team, with the support and guidance of her professors and coaches.

“SWU, first, gave me space and support to figure out my calling, and second, gave me opportunities to share truth and practice those skills,” Wickham said.

Last year, Wickham was given the chance to speak in chapel. She felt the opportunity was a call from God, and that he was asking her to “work hard on this message and speak to your peers with truth and love.”

While Wickham was spending more time in the spotlight, she was also learning the grace of being herself.

“I learned a lot about grace. I can give others grace easily, but it’s hard to give myself grace because I see those bad things inside of myself,” she said.

“There’s no need to perform. People enjoy my presence, but I’ve been trying to earn it for too long. God taught me the grace to just be instead of do,” she added. 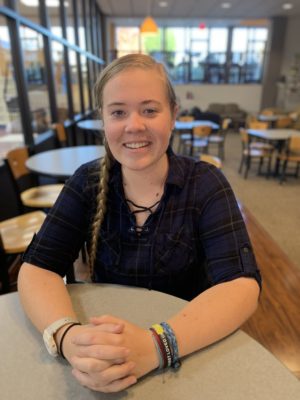 Wickham is still on campus as an assistant resident director. As a SWU alumnus and now staff member, she shared her favorite days of campus life that incoming students should make sure not to miss.

Her first favorite is “Fiesta Friday,” a weekly Mexican-style food day in the cafeteria.

“Fiesta Friday is both hated and loved at SWU. I love Fiesta Friday, because they have queso! Others hate it because it’s unhealthy. But it’s definitely a fun tradition,” Wood said.

The second only happens once a year: “Lessons and Carol.”

“It’s a worship service every winter put on by the fine arts division. It’s a wonderful worship celebration – a liturgical service where the band and orchestra play and there’s a candle lighting,” she said.

So, prospective students, heed Wickham’s advice and don’t miss out on the best days of the year at Southern Wesleyan.