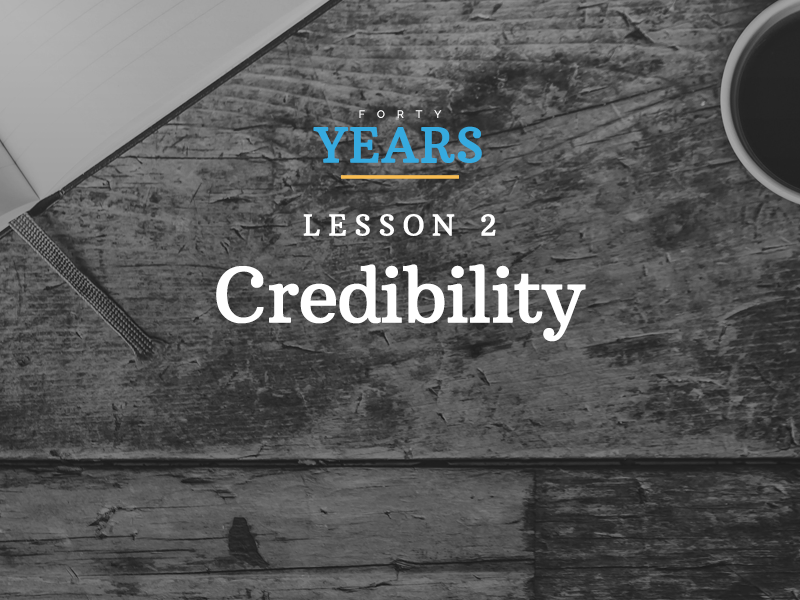 I have experienced the challenge of wise credibility in all three of the ministry responsibilities God has entrusted to me over these 40 years.

If we are faithful in little things and over time by God’s grace there is fruitfulness in our ministry, we will begin to build credibility with those we are privileged to shepherd. I believe that the accumulation of credibility is a stewardship opportunity and responsibility. Credibility is not an end in itself — if stewarded well, it is reinvested in kingdom purposes.

I have experienced the challenge of wise credibility in all three of the ministry responsibilities God has entrusted to me over these 40 years.

In local church ministry, I served one church that I co-founded for over three decades — realities that tend to build credibility. I had to invest credibility every time we planted a church, needed to raise money or entered a building program. When Kentwood Community Church was called to become a multiethnic church to reflect both our community and heaven (Revelation 7:9), I tried to delegate leadership responsibility to those with more experience. God made it clear in 2005 that this significant transition would require the investment of credibility I’d accumulated over years as their pastor.

In the launch of Wesley Seminary at Indiana Wesleyan University, I was specifically recruited to provide leadership because they wanted to be a seminary that served The Wesleyan Church and was innovative in equipping pastors. When I pointed out in an initial conversation with then President Henry Smith that I had no academic administrative experience and had “only been a local church pastor,” he said, “Exactly. We want our seminary to serve pastors and want it to be led by a pastor who has over the long haul planted churches and helped the local church remain relevant in its community.”

When I was elected to serve as General Superintendent, many pointed to my background in the local church and an educational institution as foundational to The Wesleyan Church increasingly becoming a movement that multiplied disciples and churches.

The insightful book, Canoeing the Mountains, powerfully argues that you must have credibility within a system before seeking to challenge or change the system (pp. 43–44).

You must first build credibility to be a transformative leader. And once you build it, if you don’t use it, you lose it. So, credibility is something you build, steward and then invest repeatedly. If you hoard it, you may become popular but will never be fully productive for the kingdom — to put it bluntly, popularity is the prostitution of credibility.

In what is likely my last decade of full-time ministry, a significant and strategic investment of credibility is to position those who will be the next leaders. In ways that are similar to God’s instruction to Moses in the commissioning of Joshua, “Give him some of your authority (credibility) so the whole Israelite community will obey him” (Numbers 27:20). The authority that comes with credibility must never be squandered on personal popularity, but invested wisely in kingdom risks and then given generously to the next generation of leadership.