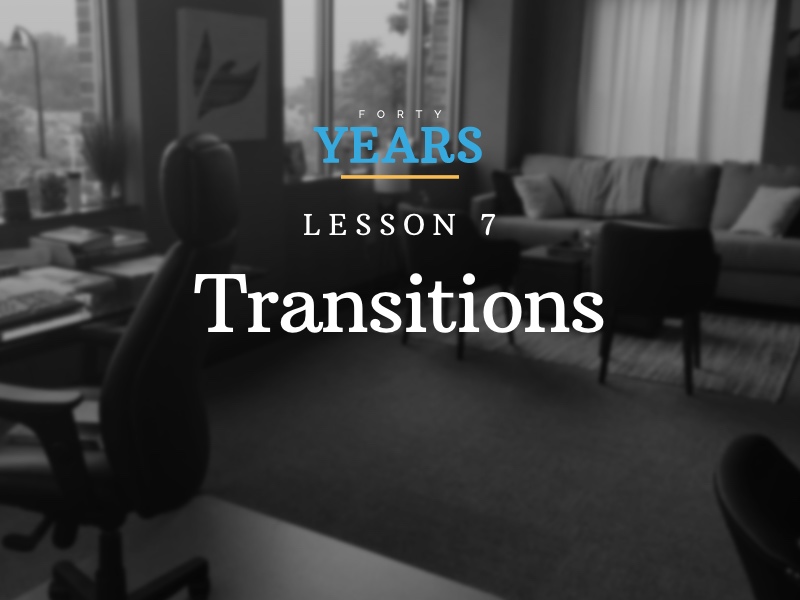 The beautiful and mysterious thing about following Jesus — following his will is always better than following my own plan. And it always will be.

As I was approaching graduation from Marion College (now Indiana Wesleyan University) in 1979, I entered into a prayer partnership with Dennis Jackson to discern what was next. During that time Dr. Laurel Buckingham, lead pastor of Moncton Wesleyan Church from 1969 until 2013, gave this challenge — “pray that God will call you to a community where you could spend a lifetime.” That prayer focus led to being part of a church planting team — a call to a community in Kentwood, Michigan, where I served with a lifetime horizon.

The personal turmoil I experienced when transition occurred during this season was due in part to “adding my calculation to God’s revelation.” I sensed God’s call to a community for a lifetime, but began to wonder “just how long is a lifetime call?” I determined it would be for 40 years, developing a 2020 vision plan for the congregation. God surprised me 30 years into my time in Kentwood. The test of trust came when God’s timing differed from mine!

Kyle and Petra Ray began attending Kentwood Community Church (KCC) in 1999. They served effectively in many ways, including helping to lead the church to become multiethnic, as our community had done over those 30 years. Kyle eventually joined the pastoral staff.

This period of uncertainty was relatively brief but deeply transformative. God helped me discover that while I believe my identity and security was in Christ, it was significantly rooted in my role as senior pastor of KCC.

As I write this, Wesley Seminary just celebrated its tenth anniversary. I was privileged to give administrative leadership for just over six years seeing a seminary emerge committed to serving The Wesleyan Church and significantly beyond.

As the 2016 General Conference approached, I was invited to interview for possible nomination to serve as General Superintendent. Jan and I determined that “the will of God for us would be revealed in the will of the delegates,” and I was elected. I love having a front row seat in witnessing how God is working in North America and globally!

God led me differently in every transition. I believe he changed things up to keep me from trying to control, keeping me dependent upon him rather than orchestrating things myself. That is the beautiful and mysterious thing about following Jesus — following his will is always better than following my own plan. And it always will be.