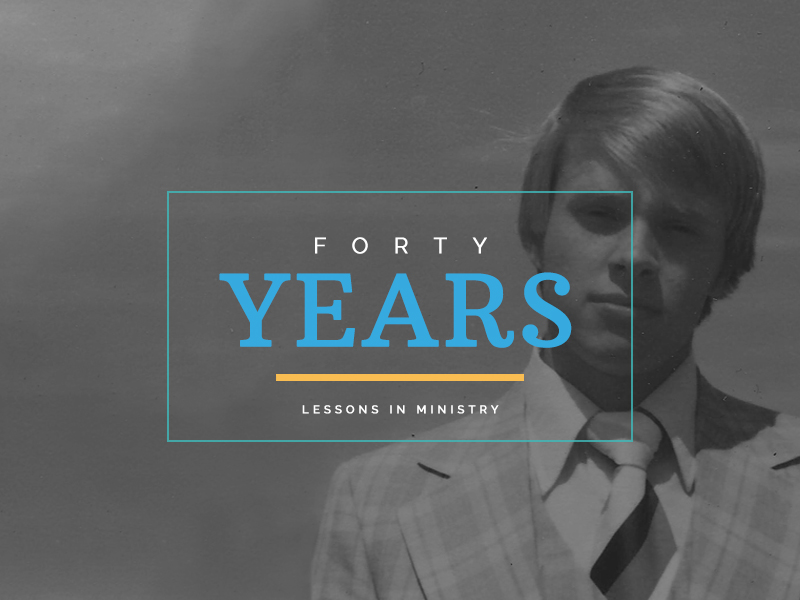 Lessons from 40 years of ministry

In the coming months, I’ll participate in the ordination of over 100 ministers. I thought it would be a fitting season to share some lessons I’ve learned these last 40 years. I hope you’ll join me on this journey of celebration and reflection.

Today completes 40 years of ministry for me. In some ways, it seems like yesterday that a 21-year-old kid who graduated from Marion College (now Indiana Wesleyan University) joined a launch team to plant a church on June 1, 1979. In other ways, it seems like, well, four decades ago. Now, at age 61, I still feel like that kid most days.

So, I’ve decided to write about some “lessons learned” over the 40 years. I looked for 40-year situations in the Bible and landed upon Joshua 1. After 40 years of wilderness wandering, Joshua finds himself uniquely positioned in the upcoming season to take new territory. In a private conversation with the God of the universe, he is told, “Have I not commanded you? Be strong and courageous. Do not be afraid; do not be discouraged, for the Lord your God will be with you wherever you go.”

Now my 40 years could hardly be characterized as desert wandering. But the people of God about to enter the promised land had developed a culture of “nomadic consumerism” — wandering from place to place in the desert with a “feed me” relationship with God as they consumed their daily manna. In some ways, the overall culture of Christianity is the same — people wander as they “church shop” for the place that will best satisfy their “feed me” consumeristic desires.

Joshua’s challenge was to turn nomadic consumers into a force that would take the territory God had promised them. And, in a way, that’s the challenge I face as I serve in my present role. In an overall Christian culture of nomadic consumers, how does The Wesleyan Church become a Kingdom Force that takes new territory by disciples making disciples and churches multiplying themselves?

As in Joshua 1:9, God is expecting obedience — “Have I not commanded you?” He is calling for courage that overcomes fear and discouragement. He has promised to be with me and with those I am so privileged to lead.

In some ways, my ministry journey is unique. In 40 years, I haven’t really served in hard places. During 30+ years at Kentwood Community Church (Grand Rapids, Michigan), more than six years at Wesley Seminary (Marion, Indiana) and, now, three years as General Superintendent, I have been mostly filled with gracious, generous relationships. Many in ministry or missions serve in hard places, and I must humbly acknowledge I can’t fully relate.

But certainly, there have been some hard times, many of which became “offering plate moments” of fresh surrender to God. (For further details on these, see the book Surrender with Wesleyan Publishing House.)

In the coming months, I’ll participate in the ordination of over 100 ministers. I thought it would be a fitting season to share some lessons I’ve learned these last 40 years. I hope you’ll join me on this journey of celebration and reflection.