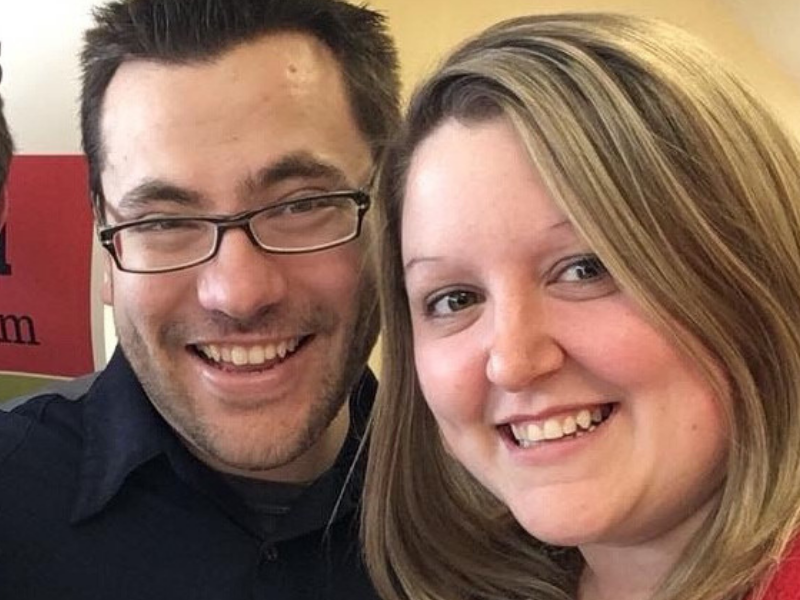 A ministry couple recounts how attending The Gathering 2019 had a hand in saving their marriage.

The Lord used The Gathering 2019 to redirect our marriage from destruction and barbed wires, if I’m being brutally honest. My husband, Jamin, and I are both stubborn and that very stubbornness kept us from telling each other about the struggles we were facing, each out of not wanting to burden the other. The silence in our marriage had produced a wedge that kept growing more deeply and our marriage felt poisoned and stale.

This May will mark five years of marriage for us. We are Kingswood University graduates who began dating while in college after years of friendship.

After our wedding in May of 2014, I moved to Maine, where Jamin was serving as lead pastor at Community Wesleyan Church. In the beginning of 2015, we started trying to get pregnant and did so within the first month. However, the first miscarriage happened around the five-week mark in February. It was incredibly hard.

We were quite surprised to find out three months later that I was pregnant again. This was exciting, but clearly with the first miscarriage being so fresh, we were nervous. The first doctor’s appointment went well, and we received great news, to our relief. However, a couple weeks later, in July 2015, we experienced another painful loss. I was a wreck and began to believe I might not be able to carry our own children. We both knew we needed to take time away from trying again, so we did for a year.

We began trying again in 2016. But month after month, we received the same news: I was not pregnant. Depression set in. We eventually returned to our home country of Canada. Jamin began serving at Amherst Wesleyan Church in August 2017, where he still serves today as assistant pastor and I serve as worship leader. We also serve as leaders in youth ministry.

In the midst of suffering multiple miscarriages, I also lost my nanny, who was still an important part of my life. Grief began to affect my everyday life. I felt passionless and bitter. I felt unworthy and rejected by God because we were unable to conceive.

In December of 2018, after nearly 2 ½ years of attempting to get pregnant, I did not feel well. I went to the hospital and learned I’d had another miscarriage — and did not even know I was pregnant. I felt numb, abandoned and frustrated.

Nothing excited me — not the Christmas holiday (the first without my nanny) and not our trip to Orlando. Multiple wedges over the past year were driven into our marriage with a lack of communication and silence in sharing our struggles, the difficulty in starting our family and juggling everyday ministry life. I had days when I honestly didn’t even want to be married anymore and thought life would be easier without being a ministry couple. Unfortunately, it took my husband writing me a letter and reading it to me. I didn’t realize how critical I had become of him and of others. My broken and bitter spirit leaked out sarcasm and criticism — which was destroying his confidence as a pastor and as a husband.

Jamin shares how this time was difficult for him, too.

“For as long as I can remember, I have struggled with depression,” said Jamin. “Sometimes, it is caused by the ebb and flow of seasons, while other times, it is brought on by certain events occurring in my life. Regardless of how, depression is always the same. A sunny day is dark and dreary. My joy is gone, replaced by apathy. My typical positive outlook on life is bleak. I begin to second guess what people think of me, and forget what God truly thinks of me. It affects how I respond to those I am ministering to and my wife. It is not an easy road, especially when days turn into weeks. I wonder when the victory will come.”

Ultimately, we chose to attend The Gathering together anyway, wishing God would give us hope and restore our joy, both individually and as a couple. The event provided refreshment and renewal, and we learned how to thrive. The seminars about thriving in ministry through life’s difficulties spoke to both of our hearts.

Another aspect that helped our marriage was being able to worship together there. With my worship leadership position at our church, we can rarely worship side by side on Sunday mornings. This provided a connection we desperately needed.

Jamin and I both walked away encouraged and renewed.

“The good news about victory?” said Jamin. “It always comes. David wrote in Psalm 34:18, ‘The LORD is close to the brokenhearted; he rescues those whose spirits are crushed’ (NLT). It is a verse I go to when I am depressed to remind myself that God is not going to leave me in the depths of despair. Victory will come. I will be reclaimed.”

We are truly grateful to our church and the lead pastoral family for allowing us to go. We can’t wait to attend again. Our marriage has been renewed and we have begun praying with each other daily, which has been a huge turnaround for us. We are learning to talk about things before they become deep and infested. We are still working through struggles, but what marriage isn’t?

The Gathering represents an Ebenezer stone in our lives, and we move forward together as God continues to write our story.