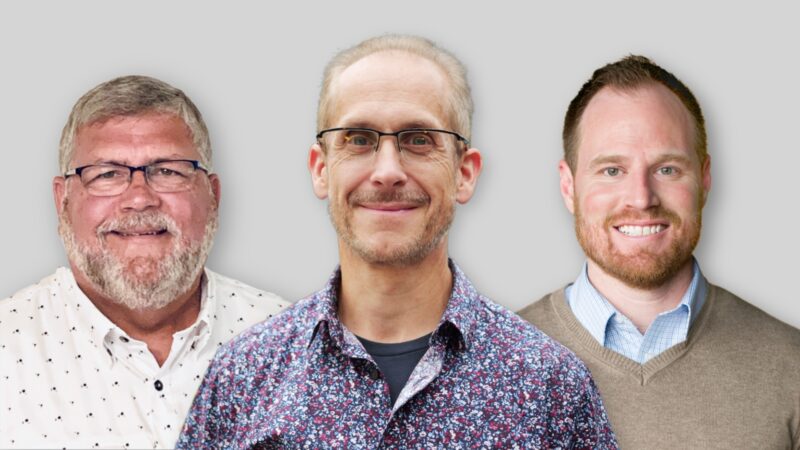 The Wesleyan Church district conferences took place throughout June and July, and one of the results of this was the election of three new district superintendents.

In the Chesapeake District, Mike Hilson stepped down to pursue other ministry work, and the conference elected Dr. Todd Crofford to take up the role. Dr. Crofford grew up in Rochester, New York, but he and his family have served in ministry in the Chesapeake District since 1995. He and his wife, Diane, have been married for 34 years and have four daughters and one son. They live with three of their parents in Mechanicsville, Maryland. “And,” says Dr. Crofford, “we have two cats I am willing to give away on most days!”

He obtained his master’s degree from Indiana Wesleyan University in Marion, Indiana, and has a Doctor of Ministry in church planting and growth from Talbot School of Theology, Biola University, La Mirada, California. Dr. Crofford and his family started their ministry in Laurel, Delaware, but in 2008, they moved to Mechanicsville and planted Real Life Wesleyan Church. They remain there today. He notes that their experience on both the east and west sides of the Chesapeake Bay has set him up “to personally understand the cultures of both halves of our district.”

As Dr. Crofford looks ahead to his leadership of the district, he emphasizes that connecting with local pastors is a priority. “My greatest desire as a District Superintendent,” Dr. Crofford says, “is to figure out how to be a pastor to these great leaders by serving them.”

Following the passing of Dr. Mark Eckart in March 2022, the Indiana South District formally elected Rev. Doug Preston to be their new superintendent. Rev. Preston and his wife, Sherri, have two daughters, five grandchildren and one great-grandson. An Indiana native, he attended Indiana Wesleyan and spent many years in business before becoming a pastor.

He was ordained in The Wesleyan Church in 2009 and was the senior pastor at LifeLine Wesleyan Church for over 15 years. Under Dr. Eckart, he served as a district regional leader until he was elected as the superintendent. Throughout his ministry, Rev. Preston has led two churches through the revitalization process, served as the Church Multiplication and Discipleship director for Indiana South, and worked as the revitalization director for Dirt Roads Network, among other ministry efforts.

Rev. Preston is excited about many aspects of his position as superintendent. The endeavors he wants to pursue over the next few years include “creating an atmosphere in the district where pastors and their families feel loved and supported.” He also hopes to work on “revitalizing rural churches in need of new direction” and developing the district camp into a conference center that district churches can use. He says, “I am humbled and honored to serve our district in this capacity. It is for God’s glory and kingdom building! I am blessed to have a great district board and leadership team beside me with the same goals in mind.”

In the Shenandoah District, Rev. Tim Kirkpatrick was elected to be the new superintendent as Rev. Greg Reynolds entered retirement. Rev. Kirkpatrick and his wife, Katie, have three young children — two daughters and one son. They live in Central Virginia where they “enjoy gardening, raising their chickens and taking trips to the National Parks around the U.S.”

Rev. Kirkpatrick has a Biblical studies degree from Indiana Wesleyan. Over the course of his degree-earning process, he also worked in ministry in a variety of capacities. He spent time as an intern at a nondenominational church, eventually becoming one of executive pastors there. He also helped lead relief efforts following Hurricane Katrina, an experience he says has stayed with him ever since, and later founded a local faith-based nonprofit called Love Acadiana that provides similar aid. He stepped back from pastoring to become chief of staff for a church board member, which led him to start Second Chair Solutions.

As he takes on the new role of district superintendent, Rev. Kirkpatrick says he is focused on asking pastors two questions: first, “What can I do to help you?” and second, “What can I do to get out of your way?” He notes that the kingdom benefits when we “get behind what the Holy Spirit is doing through people, instead of trying to control what we want to happen.” He and his team hope to build trust and church health in their district in preparation for the next five, 10 and 30 years of multiplication.