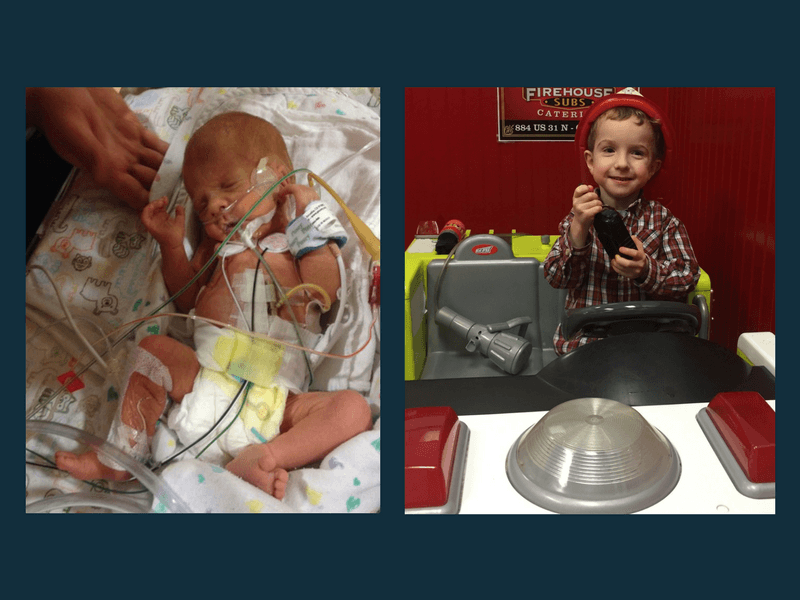 A new story for a new year

Vacation was still a couple weeks away, and my anxiety was high. One day, I sensed God say to me, “I want to give Andrew a new story, but you must let me.”

It’s been more than three years of battling anxiety over health problems for our precious boy.

Andrew was born 10 weeks early in 2014 with an unconnected esophagus and spent 13 weeks in the NICU. While he is doing well today and has a fully connected esophagus (thank you, God, modern medicine and gifted surgeons), he still struggles with repercussions of both his birth defect and prematurity: floppy airway/trachea, weak immune system, asthmatic tendencies and being small in stature. We’ve had three and a half years of therapies, diagnoses, specialist appointments, surgeries, procedures, medications, breathing treatments, victories, setbacks, hospital stays, illnesses, insurance claims and everything in between.

Andrew tends to get sick easily. Respiratory illnesses can be extremely dangerous for him and have landed him in the hospital twice in the last 13 months.

This past September, as we anticipated our annual trip to Walt Disney World, my anxiety was extremely present. You see, during our 2016 trip to the “most magical place on earth,” Andrew landed in the emergency room for dehydration from a stomach bug. I did not want a repeat on our 2017 vacation.

Weeks before we left in September 2017 (where he did end up staying healthy), I sensed God giving me the words “new story.” But why did he give them to me?

Vacation was still a couple weeks away, when, one day I was running work errands with a co-worker. I told her how God had given me those words, “new story.” As we talked, I sensed God say: “I want to give Andrew a new story, but you must let me.”

I knew I’d heard from God and that he wanted to uproot my pessimistic anxiety about Andrew’s health. A pessimism that often thought, “Andrew will always be prone to sickness. This is his story and always will be, so just get used to it.”

In the three and one-half years since Andrew’s birth I’ve gone through seasons with God:

These days, I am doing my best to walk by faith in a new way as God reminds me of his new story for Andrew:

God continues to prompt me to believe that he can write Andrew’s story differently. Isaiah 43:19 says: “See, I am doing a new thing! Now it springs up; do you not perceive it? I am making a way in the wilderness and streams in the wasteland.”

What about you? What new story does God want to write for you in 2018?

Ask God what your new story should be and let him write it this year.