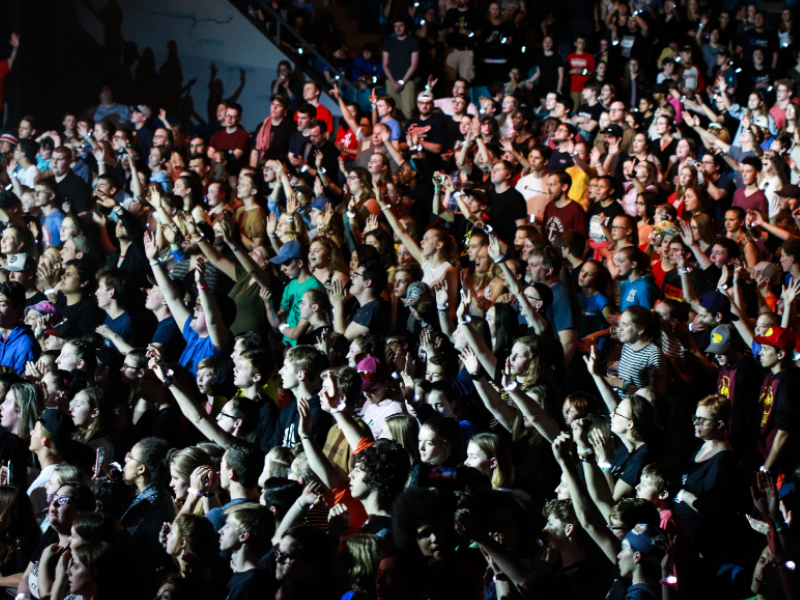 ONE Conference 2019 continues to inspire church unity in Canada

One month has passed since ONE Conference, yet I am still blown away by how God moved as I reflect on that weekend. There is a new hunger for a move of God that is awakening in this generation, and we're doing our best to pour fuel on that fire.

This year, Passion Music (Passion City Church) led worship and Sadie Robertson kicked off the weekend by releasing a word of purpose and potential over the youth of the Atlantic Canada region.

ONE Conference was initiated as a student ministry conference to gather youth as one body of believers, not defined by denominational differences.

Rev. Zach Coffin, director of Next Gen Multiplication and Discipleship for The Wesleyan Church, attended the event. He said, “For this generation to see ‘one’ church pushing the Kingdom forward is deeply beautiful. This generation demands a unified church pursuing Jesus, and the ONE Conference gives them a glimpse of eternity.”

Andy Broad co-directed the event with Reneé Embree. Broad is a youth pastor at Kings Church in Quispamsis, New Brunswick. Embree is the director of Youth and Family for the Canadian Baptists of Atlantic Canada.

Broad said, “ONE Conference is so special because it is a partnership of THE church (ONE church) and to see the next generation leading the way in a beautiful, unprecedented partnership is a clear window into the kingdom of Heaven. The culture of honor and mutual submission that’s been established is incredibly inspiring.”

Embree agreed saying, “I’ve never seen such an appetite for making Jesus known, collaboration and unity. It was and is beautiful. It takes humility for everyone to lower their denominational differences and work to be united in Jesus for the sake of joint Kingdom goals, but it is so rewarding when it happens.”

Broad said, “While I can report the numbers and stats, and they tell an amazing story, it’s difficult to accurately express in words the palpable sense of the Holy Spirit moving so powerfully in the hearts and lives of thousands of teenagers.”

One mother, who attended the event as a youth pastor and leader, spoke of the small, yet tangible change she had noticed in her daughter (15), who also attended. She said her daughter, who recently turned from her faith, reluctantly attended the conference with her.

“At the end rally when the speaker had everyone standing and declaring altogether, I saw my daughter actually repeating those words. This might not seem big, but I know my daughter. Just because everyone is doing something, doesn’t mean that she will. Normally, she would just stand there,” she said. “She was declaring with the rest of us. God is moving in her life. I see it, even in these short 4 weeks. She’s excited to go back next year.”

Mike Miller, pastor of Nova Church in Halifax, Nova Scotia, and Carlos Whittaker, speaker and author of “Moment Maker,” filled out the speaking roster, challenging and commissioning the church to boldly pursue the vision the Holy Spirit is calling the people of God to in this region.

This vision involves a revival beginning on the East Coast, prompted by the work of the Holy Spirit. ONE Conference is both a direct result of that vision and an ongoing catalyst in creating Kingdom momentum moving forward.

“The Lord is doing something very special in Atlantic Canada right now. At the foundation of this movement is desperate people longing to see God do what past generations have been begging God to do for decades,” Coffin said. “We are seeing the prayers of the past, met with the zeal of the next generation. When prayers are met with passion, the stage is set for a revival to breakout. Please Lord, bring it now.”

The words to Passion’s song, “Fade Away,” became the the unified anthem for the conference this year: “If you’re not in it, then I don’t want it. Let all else fade away. Take the whole world, but give me Jesus.”