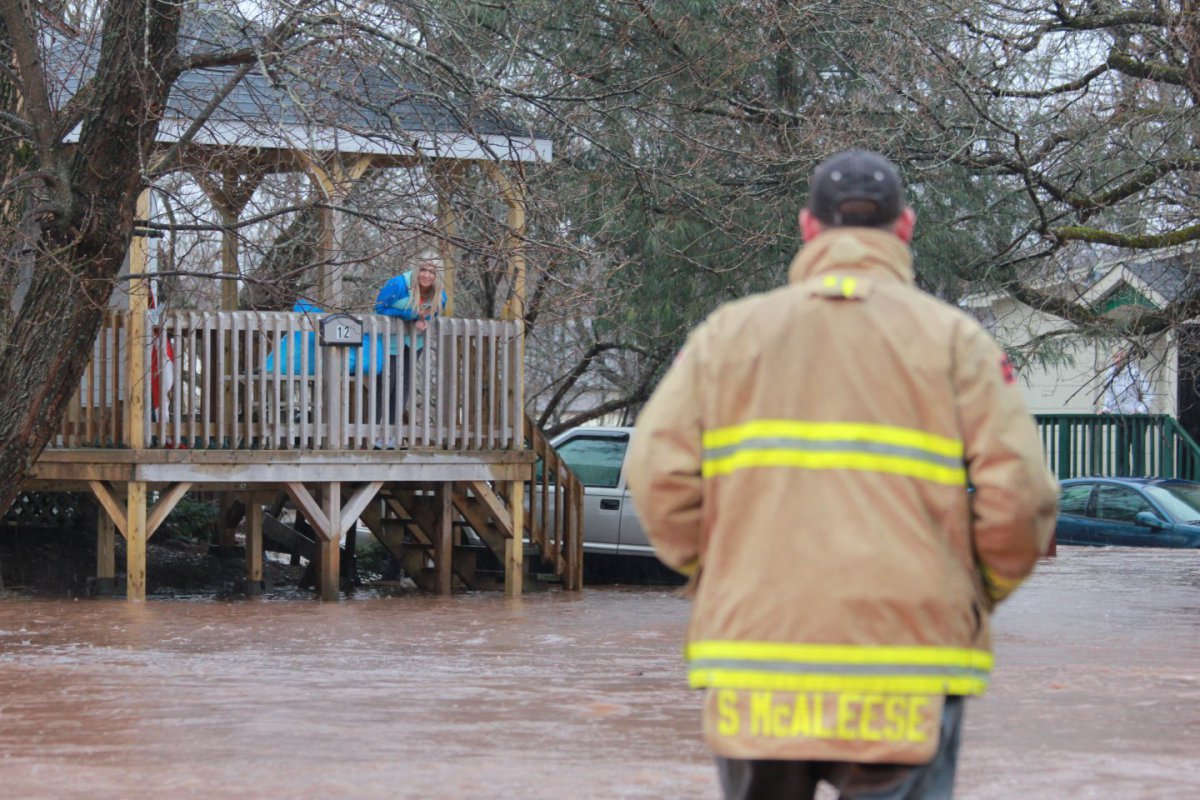 Early on the morning of April 16, Dr. Mark Gorveatte’s phone rang. It was the Sussex, New Brunswick mayor, asking the Kingswood University president if they would open their doors to the community as residents faced what is now being called “the worst flood of the century.” Without any hesitation, Wesley Hall became an emergency shelter for those who became victims of the rising waters.

Flooding in Sussex and Sussex Corner resulted through the combination of an ice jam on the river, high tide with rivers and creeks at full capacity, and heavy overnight rain. The high water flooded basements, submerged businesses, and forced the closure of several roads in the town. Entire neighborhoods were evacuated. At least 70 percent of the nearest town was under water.

When evacuees made their way to the emergency center at Kingswood University, they were warmly greeted with food and dry clothing. KU staff and students assisted the Red Cross and government agencies by registering those who came in and helping victims make phone calls. Throughout the day students connected with residents as they listened to their stories and played with their children.

Third-year student, Patricia White said, “I sat at a table for five hours, just talking with some of the ladies, but it didn’t feel that long at all. That day I learned the importance of community, and I witnessed true servanthood.”

Fourth-year student Jared Welborn could not stay inside; he wanted to be out working with those who were trying to keep the swiftly rising water from destroying their belongings. Welborn went to homes of Kingswood staff that were also getting water in their basements and helped move furniture and boxes to the upper floor. Then, he started going door to door, offering his help to others.

“My heart is with the community,” said Welborn. “I have a duty and privilege to help out.”

Even as Kingswood ends their school year, students are recruiting their peers to spend after school hours helping in the community. They are going out cleaning basements, moving heavy equipment or washing down floors and walls for neighbors. Classes and groups of students are volunteering with Samaritan’s Purse. Whenever they can take a break from studies, several students are out in the community offering flood relief in whatever way they can.

“I’ve heard stories of Christian folks responding to the need, going into the homes of strangers around town, and pitching in to help,” said David Trouten, the division chair of General Education at Kingswood, who also experienced flood damage to his home. “With each story I hear, there is a common thread to their experience. At some point the homeowner has turned to the serving Christian and said, ‘I don’t understand why you would help a complete stranger. Why are you doing this?’ God has given us the opportunity to share the hospel through the flood recovery.”

This week the Honorable Bruce Northrup, who is Minister of Public Safety and Solicitor General for New Brunswick, returned to Kingswood University for a follow-up press conference. Reporting that 5,040 properties in New Brunswick were hit by the flood with an estimated $12 million in damages, Northrup publicly thanked Kingswood University for opening their facilities and serving the community.

On a day when several residents lost much of what they owned, Kingswood offered a cup of water, a loving hug, and helping hand–all in the name of Jesus.