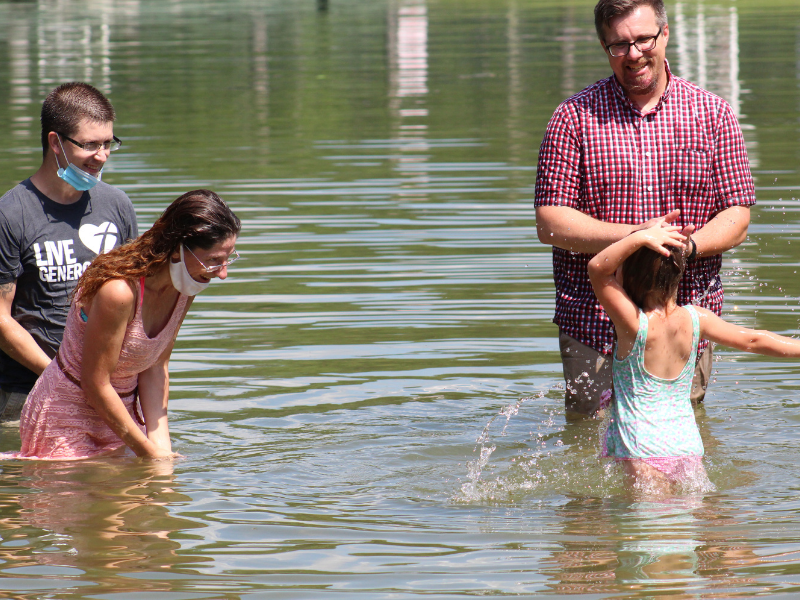 “I might serve another 20 years in ministry without ever having so moving a Communion experience."

“I might serve another 20 years in ministry without ever having so moving a Communion experience.”

Rev. Joel Tate described the emotional scene that unfolded on Sunday, November 3, 2019, just one week before he planned to lead his church, Furnace Brook Wesleyan in Pittsford, Vermont, in their first Stand Sunday service.

Five-year-old Mikyah showed up at Tate’s side, asking to be picked up, as he and his wife, Christine, served Communion to their congregation. With Mikyah in his arms, Tate met eyes a few minutes later with Mikyah’s parents, Brent and Tiffany, who had joined the Communion line.

Several years earlier, the Tates and their four children opened their home to children in foster care. Mikyah joined the Tate family at age two after being removed from her home, along with her two siblings, due to her parents’ addiction struggles. The adorable, little girl quickly stole their hearts. The Tates understood the goal of foster care to be reunification with the birth family whenever possible. However, when Mikyah’s parents first appeared unable to meet their reunification goals, Tate allowed his heart and mind to turn toward thoughts of adopting Mikyah.

Then everything began to change. Brent and Tiffany both got clean and started doing all the things they were supposed to do.

“It was impossible not to admire how much work and effort they put into getting their kids back,” said Tate. Still, because of his deep love for Mikyah he felt conflicted. “There was a point where I was incredibly twisted up in my spirit, where I wanted them to succeed and I wanted them to fail. I didn’t really know what I wanted.”

Brent and Tiffany now admit they didn’t make things easy for Tate. When asked how they felt as he began to pursue a relationship with them, both described how they despised him at first. Brent made it known he was adamantly opposed to the Tates taking Mikyah to church. Tiffany described her instinct to fight the relationship.

“I wanted to hate him, because he was getting time with my kid that I was not and he was being the person that I could not be, and I hated that. And it was my own doing, but I needed somebody to blame. And he was just persistent. ‘You can hate me, but I’m still going to be here. I will still support you.’”

As Tate continued to reach out to Brent and Tiffany with unconditional love, their hearts began to slowly warm toward him and his family. Still, there was no guarantee that once they regained custody of Mikyah they would choose to continue a relationship with the Tates.

Tate describes a day when Brent and Tiffany got an apartment, which was one of the conditions toward getting their children back. He and Mikyah bought them a housewarming gift and then sat next to each other at home writing cards for Brent and Tiffany. He cried the whole time, and Mikyah was perplexed.

“I couldn’t tell her,” said Tate. “I couldn’t explain it to myself. I didn’t feel good about the fact that I was so upset about this.”

When, unsolicited, Mikyah put her arms around his neck and prayed for him, Tate remembered, “I’ve never felt so loved as I have in that moment. But I also felt confident that God was going to take care of all of this. My vision, what I was asking for, was so small. I wanted Mikyah to be part of my life when God was ready to bless me with her whole family. And God is just really, really faithful.”

When Brent and Tiffany regained custody of Mikyah, they insisted that one of the conditions of their custody be that Mikyah continue to spend weekends with the Tates.

Mikyah’s weekends with the Tates ended with Brent and Tiffany joining them at church each Sunday, before taking Mikyah home with them. For several months, Brent and Tiffany had also accepted Pastor Joel’s invitation to meet weekly and go over discipleship material but hadn’t yet made the decision to follow Christ — until that Sunday when they joined the Communion line with the Tates. He recalled when Brent and Tiffany made it to the front of the line, “And there we were, the five of us with the bread and the cup and lots of happy tears.”

The following Sunday during their church’s first ever Stand Sunday service, Brent and Tiffany had the opportunity to testify to their new lives in Christ. Alongside Tate, they shared about their struggle with addiction and the pain of having their children taken into custody. They discussed the impact Tate had had on them and expressed gratitude for the way in which their experiences had ultimately strengthened and enriched their family.

Stand Sunday is an alternate branding of Orphan Sunday, with a specific focus on children in the U.S. foster care system. On that day, when Tate challenged his congregation to stand for children in foster care and commit to prayerfully take next steps of obedience, he received a heartfelt response. Following the service, about 20 people attended an informational session by their county coordinator to learn about becoming certified for foster or respite care. Others committed to participate in projects that marked the beginning of a supportive partnership with their local child welfare offices.

Tate described the baptisms of Brent, Tiffany and their three children this past summer as “the joy of my life.” Brent’s words are a testimony to the vital and unique role that only the Church can fill in child welfare and family preservation: “Tiffany and I met Joel after a very long struggle. The relationship that has been formed since meeting Joel is unexplainable. He welcomed us into the life of God’s love. Honestly, I wonder really where we would be if the love wasn’t shown to us.”

Orphan and Stand Sunday is recognized the second Sunday each November, a day when local churches all over the globe unite around orphans and foster children. Click here for more information and to learn how your local church can get involved.

Pictured: Brent and Tiffany, left, and their family, including Mikyah, were baptized this summer by Joel Tate (also pictured).