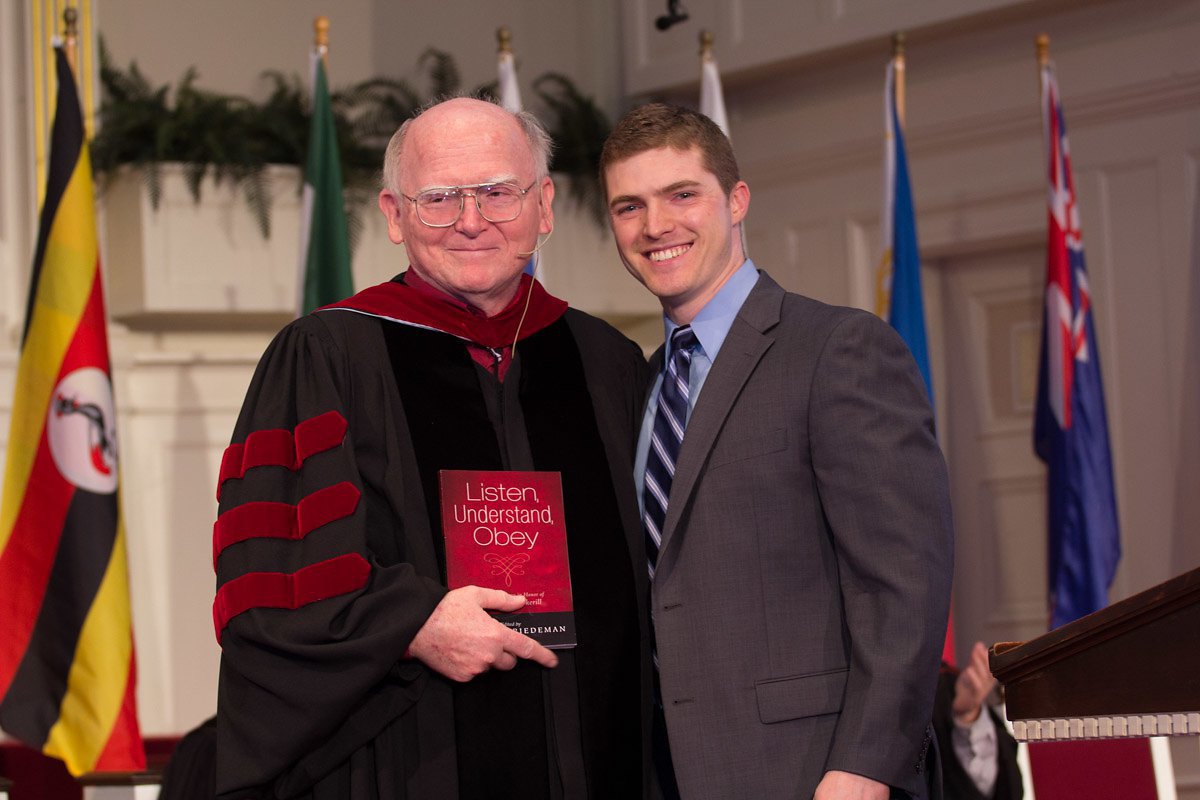 Dr. Gary Cockerill's tenure at Wesley Biblical Seminary has included his years as a professor and author with many notable accomplishments.

Wesley Biblical Seminary (WBS) honored Professor Gareth (Gary) Lee Cockerill at its May commencement, on the occasion of his retirement.

Dr. Cockerill, an ordained minister of The Wesleyan Church, has taught New Testament and biblical theology at WBS for 35 years. During eight years of his tenure, he also served WBS as vice-president for academic affairs (VPAA). Colleagues and former students surprised Dr. Cockerill with a book of essays on Hebrews in his honor. Caleb Friedeman, a WBS alumnus and Ph.D. candidate at Wheaton Graduate School, edited this volume. The book’s title, Listen, Understand, Obey, embodies Cockerill’s approach to inductive Bible study.

Many people, including Dr. Cockerill’s three daughters, Allene, Ginny, and Kate, offered loving tribute: “I realized early in my career as a high school teacher that my approach to teaching was shaped by my father’s example” (Allene Vinzant). “His ongoing desire to be a better husband, father, teacher, scholar, and Christian inspires me every day” (Ginny Cockerill). “I realized that my dad’s accomplishments weren’t a separate part of him, but instead flowed out of who he is—fun, driven, and loving” (Kate O’Donnell).

Outside of WBS, Dr. Cockerill is best known for his volume on Hebrews in the New International Commentary on the New Testament. Grant Osborne, Professor Emeritus of New Testament at Trinity Evangelical Divinity School, called this book one of the “top three” commentaries ever written on Hebrews. Dr. Cockerill also authored Hebrews in A Bible Commentary in the Wesleyan Tradition (Wesleyan Publishing House, 1999). He wrote Christian Faith in the Old Testament: The Bible of the Apostles to help both ministers and lay people understand the unity of the Bible.

Dr. Crockerill and his wife, Rosa, served for a number of years with Global Partners in Sierra Leone, West Africa. They continue to be strong supporters of Global Partners and are passionate about preparing biblically-grounded and theologically-formed leaders for the worldwide mission of the church. Southern Wesleyan University honored Dr. Cockerill in 2014 as alumnus of the year. He has also been instrumental in efforts with Oklahoma Wesleyan University to begin offering a WBS Master of Divinity degree at OKWU’s Tulsa site this fall.

In retirement, Dr. Cockerill hopes to maintain an active schedule of writing, lecturing, and mission service. He is co-chair of the Institute for Biblical Research Old Testament in New Testament study group, a fellow of the St. George Center for Biblical and Public Theology, and an active participant in the Evangelical Theological Society. He and Rosa also plan to spend time with their daughters, sons-in-law, and four grandchildren.

Pictured: Dr. Cockerill with Caleb Friedeman at the 2017 commencement ceremony when Caleb presented the book of essays he edited on Hebrews called Listen, Understand, Obey compiled in Dr. Cockerill’s honor.