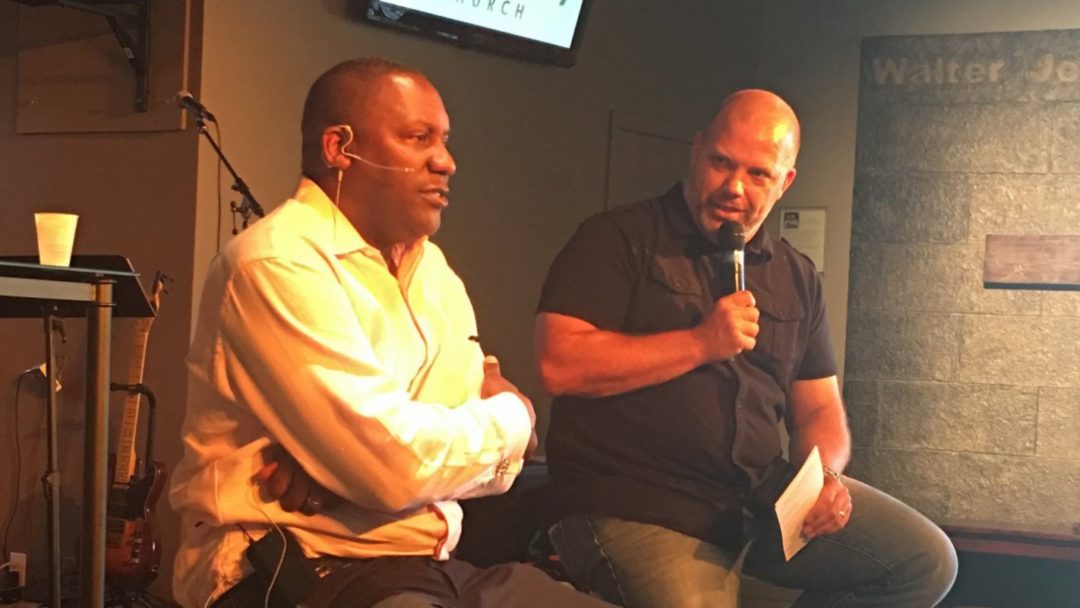 Pastors' friendship leads to expanded conversation about racial tensions in the U.S.

Dr. Lawrence VanHook and Rev. Bill Wickham recently pulled up stools and sat side by side as members of the congregation of Spring Valley Church in Rocklin, Calif., asked Dr. VanHook some questions.

These questions focused on what a predominantly white, middle class congregation could do to address the racial tensions our nation faces today. Dr. VanHook responded to the questions, encouraging the congregation that they are doing well at engaging in conversation and action.

“You are doing it!” said Dr. VanHook. “Dialogue and partnership are the only ways that people within the body of Christ can come together from two different perspectives on socially charged issues.” VanHook had preached earlier that day at Spring Valley that, “When one part of the body of Christ hurts, the entire body hurts.” After the service, the congregation was invited back for a “no holds barred” Q&A session.

So what brought this Oakland pastor to Rocklin? Friendship. The two pastors have been building a relationship over the past five years, ever since Community Christian Church of Christ joined The Wesleyan Church. Over those years they have taught pastoral training classes together, shared the pulpit in each other’s churches, and partnered in other ministry events. This was the first time Rev. Wickham had asked Dr. VanHook to address the issue of how the people of faith in his church should address the racial tension in the U.S. today.

Over the years the two pastors have had many vigorous discussions on these same issues over cups of coffee, but both knew it was time to expand the conversation. The ground rules were laid out, (namely, that all love Christ and trust each other’s hearts, so just ask the questions), and attendees were given the option of asking questions directly or writing their questions down anonymously.

The 90-minute scheduled Q&A time was followed by another hour of face-to-face follow up questions, and when Pastor Bill was asked how he felt the congregation received it, he responded, “To be honest, it got tense on a couple of occasions. Some were honest about their frustrations of feeling responsible for past atrocities, while others shared frustrations at why there was no quick fix answer to the issue. Some asked some very direct, emotionally charged questions regarding white and black perspectives, and Pastor Lawrence’s answers were always thought provoking and challenging.”

Rev. Wickham has had some healthy follow-up dialogue with members of his congregation in the days since the Q&A, all of which have been positive. Even those who shared the most frustration during the meeting have been challenge and some perspectives have changed. Both pastors would agree, “We certainly did not solve all of the racially charged issues today, but we are heading in the right direction!”

That Q&A session also coincided with Dr. VanHook receiving 73 fully loaded backpacks that the 120-member Spring Valley congregation had collected all summer, as a part of the annual “Back-to-School Blessing.” The backpacks have been going to the Community Christian Church of Christ for the past three years, because there is a recognition that the need is much greater in that community. Spring Valley has partnered with Community Christian Church of Christ with other “drives” in the past (Thanksgiving dinners, Walmart gift cards, etc.).

The next step for these two congregations is life-on-life community. More than a dialogue with a few representatives of one church and speaking to the other, the two congregations are looking forward to a day soon when they come together to worship and enjoy the kind of fellowship that is only possible in the body of Christ.