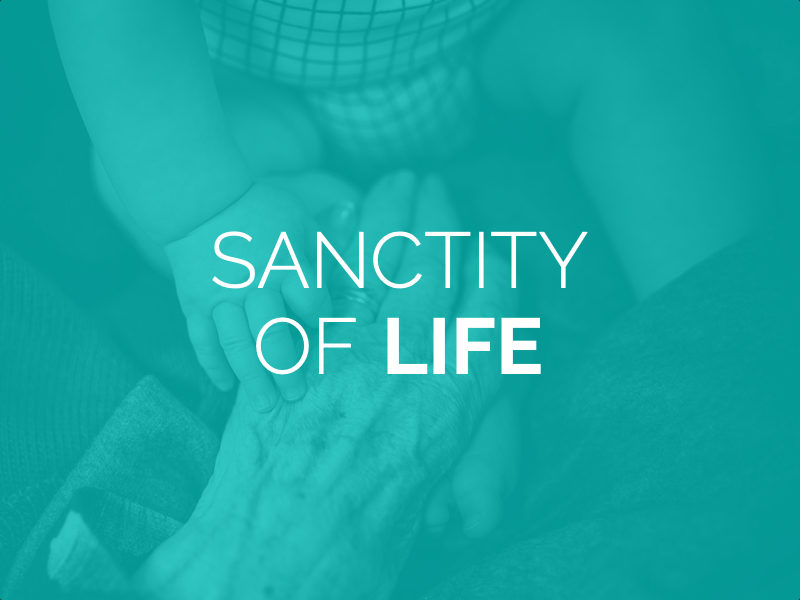 We believe that life is a gift from God and must always be regarded as sacred. We believe that decisions about the edges of life that were not even contemplated in previous times are now necessary.

We believe that life is a gift from God and must always be regarded as sacred.

We believe that decisions about the edges of life that were not even contemplated in previous times are now necessary. Although the necessity of making such decisions is new, the way Christians should make decisions has not changed. Where Scripture speaks clearly, we should obey. We should pray fervently, listening for answers. We should examine the historic positions of the Church. We should get advice from godly people. We should listen to our own consciences. We should try to obtain consensus when others are involved.

We believe that abortion is the taking of human life; therefore, society brings grave danger to itself by permitting abortion on demand, and thus treating God-given life so lightly. We call our members to oppose this social evil with great vigor. However, we reject the use of violence as a means of bringing about this needed change in society. Except in the case of risk to the life of the mother, The Wesleyan Church stands firm against the evil of abortion—both the personal evil of abortion by any individual among us and the worldwide social evil of abortion, which we believe must someday end. Until that day, we will instruct our people to avoid this sin personally, and call them to the work of enlightening a blind culture, as we once did with the sin of slavery (1996 General Conference).

Attention to pro-life values has been riveted to the frequent proactive “sit-ins” by some organizations. Hundreds of persons who feel that abortion-on-demand has resulted in moral bankruptcy for our society have moved into action through demonstrations. Since some methods represent trespassing on private property, it is tantamount to civil disobedience and raises the question of its propriety.

The Scriptures require us to obey civil authority, except where our conscience on the issues requires obedience to a higher authority. In this case, some Christians feel that the killing of the unborn is an issue which calls forth their higher obedience to God and conscience, even at the risk of civil disobedience.

A case in comparison could be made with anti-slavery actions by the underground railway movement years ago in which the Wesleyan Methodist Church was very prominent. Military service is another issue where law and conscience have been in tension. The Church has supported conscience in such matters (Discipline 410:3).

These are not ordinary times and easy answers do not always exist when facing the issues we confront today. Accordingly, the time has come for The Wesleyan Church to speak to the matter of civil disobedience in such cases as the anti-abortion battle.

The following are the convictions of the General Superintendent and the Task Force on Public Morals and Social Concerns:

1. Only non-violent responses to abortion may be commended.

2. Acceptable non-violent responses may be seeking legislative change, peaceful picketing, or even “sit-ins” at abortion clinics.

3. We believe these responses to be legitimate for Christians, in general, and Wesleyans, in particular, in the effort to defeat legalized abortion-on-demand.

4. Wesleyans should be prepared for the consequences which follow these responses in a morally insensitive world.

5. The Wesleyan Church pledges to be equally supportive to those who give an active but non-violent response and to those who by conscience feel restricted to legislative remedies.

6. All Wesleyans raise the prayer to God that He will restore to us in this generation a social righteousness which commends His blessings upon our nations and our posterity.

(Board of General Superintendents and Public Morals and Social Concerns)

The Wesleyan Church believes “In principle . . . infanticide and euthanasia are wrong.” There are no justifiable grounds to deliberately end the life of an individual through medical or any other means. However, removal of life-support systems is not to be confused with or considered a part of infanticide or euthanasia. Life-support systems sustain physical life after the natural functions of the body are destroyed or greatly impaired by disease or injury. Their removal is not taking life but rather leaving the natural process of disease or injury to take its course. The Wesleyan Church believes that removing support systems that only prolong physical life-signs, without reasonable medical hope of regaining consciousness, is a matter of conscience for the persons concerned. We urge that families pray and think through the choice they desire to make before being confronted with the actual experience of such a decision. Have a clear understanding with the family and have it in writing (Public Morals and Social Concerns).

Suicide is wrong. It is the taking of a life for whatever reason. To take one’s life while fully rational is presumption on the atonement of Christ. We must leave the fate of such in the hands of a merciful God. The Wesleyan Church believes the atonement is:

who reach the age of accountability only when they repent and exercise faith in Christ (Discipline 226).

The unconditional provision of the atonement covers the act of suicide of Christians who are irrational at the time the act occurs (Public Morals and Social Concerns).

The Wesleyan Church believes that capital punishment should be reserved for those crimes committed in serious circumstances which are clearly defined by law and administered by justice (Public Morals and Social Concerns).

We do not oppose giving extraordinary pain-killing treatment to those who are in severe pain, and who, barring a miracle, are not going to recover. Such treatment may be hazardous, but we do not oppose administration, as long as the purpose in giving it is to relieve pain, rather than to attempt to kill, or to release a hospital bed. Extraordinary pain- killing treatment of a terminal patient may be habit-forming, but, unless the patient refuses it, there seems no reason not to administer such treatment, if the patient is going to die shortly, anyway (Public Morals and Social Concerns).

There seems to be no scriptural reason not to make body parts available for helping others. As Discipline 246 states, “The raised body will be a spiritual body.” Our resurrection is in the hands of the Omnipotent, and His ability to resurrect us is not dependent on whether or not all our body parts were connected at death. Although Discipline 265:3, 10 was not written explicitly to cover body parts to others, the scriptural principles behind these paragraphs apply to donation of body parts. What is said about body parts also applies to the total dead body. One of the ways that Christians can do good is to request that their bodies be donated to a medical school for use in teaching (Public Morals and Social Concerns).

Life is a gift of God. It is sacred. Christians are compared to light and as such are expected to have a pervading influence for good in society. Also, Christians are to exert a salting impact on our world. By word of mouth and by godly living, Christians should strongly influence sanctity-of-life issues.

Whatever anyone says or writes about reincarnation or pleasurable “out-of-body” experiences, we believe that the Bible teaches that there is a final end to the natural physical life of every person, that each person will be judged, and that the only way to a pleasurable experience after death is through Christ’s atonement (cf. Discipline 248, 250).