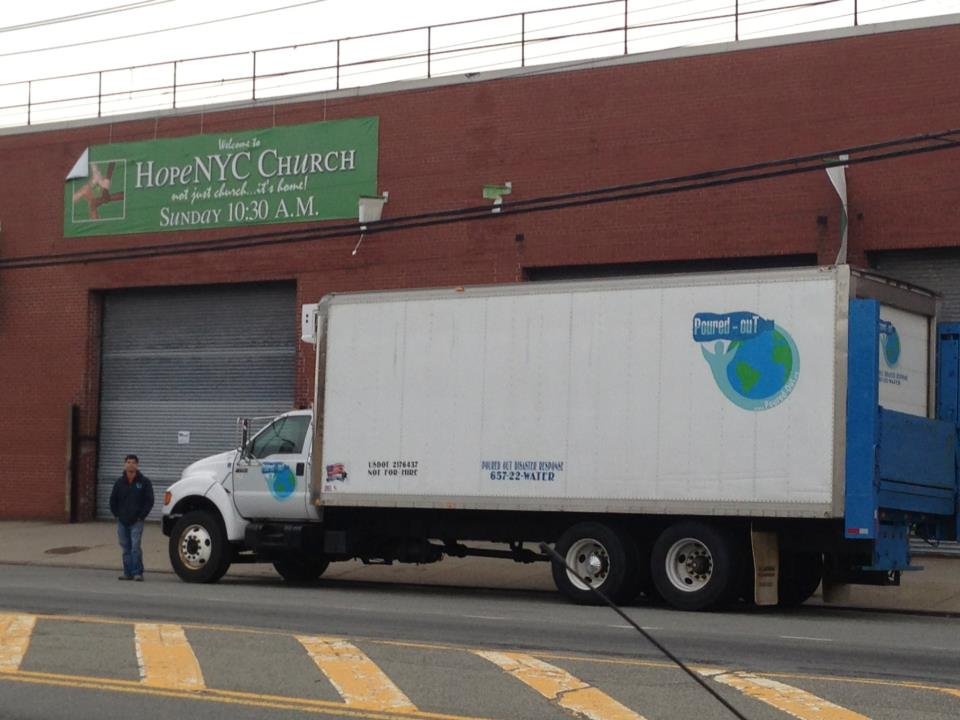 A former Wesleyan pastor and his team of disaster relief specialists were working in Haiti when Hurricane Sandy hit the impoverished nation, just five days before it hit the United States' east coast.

A former Wesleyan pastor and his team of disaster relief specialists were working in Haiti when Hurricane Sandy hit the impoverished nation, just five days before it hit the United States’ east coast in October.

Steve Adams directs “Poured Out,” a non-profit that works to provide clean water and other relief work in international locations and disaster relief in the U.S. as well. Formerly the pastor of Romulus Wesleyan Church in Romulus, Mich., for 15 years, Rev. Adams resigned in January 2012 when he felt led to direct Poured Out on a full-time basis. A certified disaster relief coordinator, he and his team were actually present in Haiti building a water system when Hurricane Sandy made a direct hit on the island. The team witnessed whole villages washed away by flooding and brand new roads merged with rivers. Protests and riots became a part of the chaos that followed.

The team continued to provide help in Haiti. But five days later, Sandy crushed the United States’ east coast. So, they transitioned to that location, bringing with them trucks loaded with supplies. Trucks began piling in from across the U.S. just three days after Sandy struck, and Hope NYC Church has been utilized as an important staging area for supplies ever since.

Poured Out is led by Adams, who has been engaged in relief work since Katrina, seven years ago, long before his pastorate at Romulus Wesleyan ended. The married father of four co-founded Poured Out with Chris Steinle, who had planted North Shore Church in New Baltimore, Mich.

When Hurricane Katrina struck New Orleans in 2005, Romulus, a church of 100, sent volunteers to the area to partner with World Hope International, the official relief and development partner of The Wesleyan Church. And they were there in Joplin, Missouri, and Tuscaloosa, Alabama, after killer tornados hit.

Today the Poured Out team continues to work overseas and also serves U.S. residents whose lives have been disrupted by natural disasters. Adams and the team traveled to New York following a phone call from Rev. Ed Torres, pastor at Faith Chapel Wesleyan Church in Annandale, N.J., who is serving as the point person for the Penn-Jersey District for getting supplies and teams into where they are most needed.

The Poured Out Hurricane Sandy team is stationed at Hope NYC, a sister church plant in Jamaica-Queens, N.Y. Situated in a former warehouse, the building is an ideal location for semi-trucks to unload mountains of food and supplies that continue to pour in for New York and New Jersey residents from partnering churches and organizations. Volunteers from across the country help unload semis, organize supplies and food, and distribute to those in need.

Some volunteers serving with Poured Out, Wesleyans and non-Wesleyans alike, are doing the tough “dirty work”: mucking out basements, fixing furnaces, hanging drywall, installing sheetrock, treating mold, and cleaning up devastated churches and homes. The effects of the storm will be visible for a long time in Brooklyn, Queens, and especially Canarsie (section in Brooklyn), Far Rockaway (in Queens), Coney Island, and areas of New Jersey.

Check out this short video of the Hurricane Sandy relief work being done by Poured Out and friends.

Steve Adams believes God has given Poured Out a mission to “connect those in need to those who want to meet needs” and the team is doing just that.

“Wesleyans who have been affected are getting help,” said Adams. “We want them to know they are not alone. And we need volunteers to continue to come and help.” Adams estimates that 300,000 doors in NYC have people behind them who still need help. He noted that folks “need furniture and fixed furnaces, houses are still a mess, and remodeling needs doing.” His crew also hosted a community outreach with Hope NYC the first weekend of December. Volunteers wrapped donated gifts to give away and they baked and distributed Christmas cookies. Adams described the event as “something simple but good for folks who have lost so much.”

Teams from Wesleyan churches are making an impact because of partnership with Poured Out and financial help for some of the big items and tools from the Wesleyan Emergency Fund. This video shows how this is working and has a wonderful testimony: Poured Out Disaster Relief/Steve Adams (see video).

Steve Adams and his team have committed to be in New York as long as they continue getting volunteer response. Currently, he said volunteers are scheduled to continue helping through January. The Poured Out director encourages Wesleyans to get involved, whether by giving needed funds through the Wesleyan Emergency Fund to help with recovery, or by traveling to the east coast to physically help Sandy victims. For inquiries about needy locations, potential dates to help, and accommodations, contact Ed Torres at 908.442.4273 (cell) or 908.735.2691 (office).