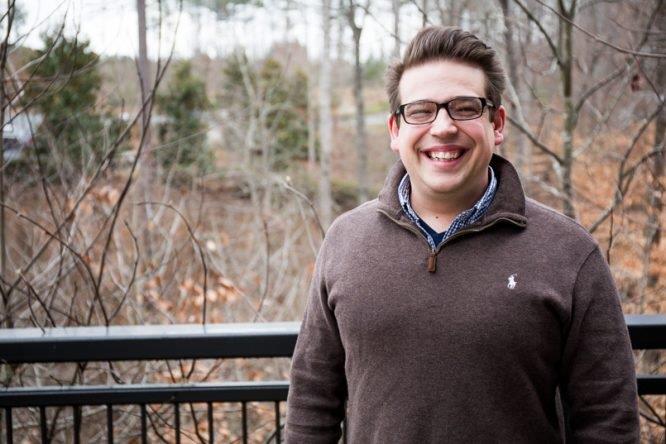 If you met Zach Aument on the street, you would guess he’s an artist, philosopher or political advisor. And while you’d be correct, Zach’s current job title is strategist.

A ministry resident at 12Stone Church in Lawrenceville, Georgia, Zach devotes his days to strategic thinking applied to spiritual formation.

His journey to residency was non-linear, but if anything, that’s only given him a clearer vision of what true holiness looks like.

Zach felt a call to ministry in high school, but as he says, “I tried to kill it.” Brimming with talent fresh out of high school, Zach jumped into corporate success, first in marketing and later in politics.

It wasn’t until his lack of a university degree presented promotion troubles that Zach considered college. 8 years after his high school graduation, Zach found himself in classes at Indiana Wesleyan. Unearthing as many questions as answers, Zach became a theology major, in good company with critically-thinking professors like Rusty Hawkins and Dave Ward.

Once more Zach found success, this time in academia. But, in 2015 at graduate school, he remembered his original call to ministry.

“Miles Welch spoke into my life, and it was absolutely convincing to me,” recalls Zach. “I needed to become a student of ministry before I started pastoring. I began my residency at 12Stone in June 2016.”

Pastoral ministry isn’t the first career change for Zach, but he hopes it will be the last.

“Growing up, so many of the best and most brilliant pastors left the ministry to become professors or work in denominational leadership. There’s a cultural perception that it’s a promotion,” explains Zach. “I don’t see that at 12Stone.”

“If you’re called to be a pastor, then pastor. It matters when pastors decide that’s where they’re going to leave their impact.”

Zach needed a ministry position that would utilize his acuity. “I am a strategist. I knew the position I would take needed to use that.”

12Stone placed Zach as the Spiritual Formation Resident, at the time overseeing spiritual development opportunities for about 600 congregation members. In one year, the number of congregants doubled, and Zach transitioned to the campus services team.

“I now oversee the spiritual formation of 15,000 people in all 8 campuses,” shares Zach.

Zach and his team at 12Stone are reimagining the spiritual formation process. Zach’s life alone attests to the fact that spiritual growth is rarely linear, though most churches have approached it that way.

“Many churches believe they can predict what every Christian’s next step should be, but life is simply messier,” Zach explains.

Rather than a road map progressing from New Believer Class A to Community Service Class D, Zach and his team created a web of spiritual formation opportunities that can be mixed and matched based on each person’s spiritual journey.

When asked where he sees himself in 5 years, Zach imagines it will look a lot like it does today, at least in mission.

“I would love to be on a team thinking through spiritual formation. Strategic thinking is my sweet spot. Scale doesn’t matter to me as much as the kind of work I’m doing. I’m seeking ordination through The Wesleyan Church.”

Zach’s own spiritual formation continues through his residency at 12Stone.

“Holiness is more a part of our culture here at 12Stone than any church I’ve been part of,” Zach remarks.

When asked for his definition, Zach says this: “Holiness is the extent to which God is able to change a human life in his or her lifetime.”

“God doesn’t just change where you end up. That’s an impoverished view of salvation. God changes your desires. He can change who and what you are,” Zach explains.

Zach’s testament to holiness may have been explicated through residency at 12Stone, but it’s validated in his life: non-linear spiritual formation that gives back, extending grace and hope to others, a testament to God’s enduring work in each of our lives.

Gaby Garver is a 2016 graduate of Indiana Wesleyan University. Having studied International Relations in college, Gaby’s passion is refugee assistance. She currently lives in Istanbul, Turkey, where she volunteers with refugees and teaches English lessons. Her favorite pastimes are cooking for friends and camping.